A Look at the History of Chinese Food in the United States
February 24, 2011
News Release 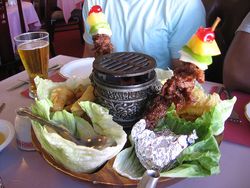 The Smithsonian’s National Museum of American History will present a Chinese American display, “Sweet & Sour,” opening March 17. The “Sweet & Sour” showcase represents a milestone within an ongoing initiative by the museum to focus on its Chinese American history and culture collections. The project called for collecting a variety of Chinese restaurant-related objects ranging from menus to restaurant signs to cooking implements, which would provide a glimpse into the long history of Chinese immigration, exclusion, exoticism and perseverance. Along with the showcase, the initiative began a “Sweet & Sour” series on the museum’s blog, “O Say Can You See?” in May 2010. This series featured blog posts on a variety of food topics, including the origin of the fortune cookie and traditional Chinese New Year cuisine.

“Chinese restaurants are an important window into the history of Chinese American immigration,” said Brent D. Glass, director of the museum. “Many Americans love Chinese restaurants, and the exhibit will show the public that there is more to take away from them than just delicious food.”

The history of Chinese immigration dates back to the mid-1800s when Chinese workers arrived in the United States to work as miners, railroad builders, farmers and laborers. The first Chinese restaurants were not opened by professionally trained chefs but by immigrants who were denied work elsewhere or simply wished to feed their own communities. The Chinese restaurant business continued to expand throughout the early 1900s as Americans became intrigued with the new exotic flavors at an inexpensive price. Chinese-restaurant owners found ways to combine their traditional recipes with Western flavors in order to attract more American customers. Chop suey, which means “little pieces,” quickly became a culinary trend. A combination of meat, fish, vegetables, eggs and sauce, the familiar ingredients invited Americans to experience a new culture.

As more Chinese immigrants crossed the U.S. border around 1965, new recipes and flavors made their way onto Chinese restaurant menus. Mixing old Cantonese-style cuisine with new dishes from regions such as Szechuan and Hunan continued to spike American
restaurant-goers interest in the food. Today there are more than 41,000 Chinese restaurants in the United States.

In order to document this long span of the history of Chinese food in America, the “Sweet & Sour” display is divided into three different sections: early Chinese immigration during the 1800s, the middle period dating through World War II and the modern day that features objects post-1965. A wok and spatula from the late 1880s, tongs from the early 1900s used to make the first fortune cookies and contemporary neon restaurant signs are all displayed chronologically. Alongside these artifacts are photos and a restaurant menu that help illustrate the evolution of Chinese restaurants in America.

The display is part of the special cases within the museum’s Artifact Walls that highlight anniversaries, new acquisitions to the collections and research findings. Artifact walls, which line the central corridors of the first and second floors, showcase an enormous variety of objects, from the everyday to the extraordinary, to convey the astonishing depth of the museum’s collections.