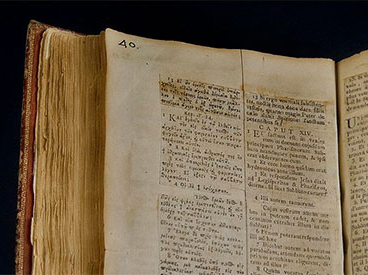 The role of religion in the formation and development of the United States is at the heart of a new multiyear initiative launching at the Smithsonian’s National Museum of American History Nov. 5. Beginning with a program series on sacred music in American life, this comprehensive religion initiative will be led by Peter Manseau, who has been named the museum’s Lilly Endowment Curator of American Religious History. It will include collecting, researching, documenting and exhibiting materials as well as presenting programs reflective of the country’s diverse religious traditions.

A $5 million grant from Lilly Endowment Inc. provides for a permanent curator of religion in the museum’s Home and Community Life division and a five-year multifaceted program consisting of scholarship, future exhibition planning and performances exploring religious faith through music and theater. A gift from museum’s board chairman, former Ambassador to Romania Nicholas Taubman, funded the creation of the Nicholas F. and Eugenia Taubman Gallery where “Religion in Early America” will open June 28 as the inaugural exhibition. This temporary one-year exhibition will be the museum’s first to illustrate the influence of religion in early American history, from the Colonial period until the 1840s.

“Religion has had an indelible impact on our nation’s history since our earliest days and is fundamental to our understanding of American life today,” said John Gray, the museum’s director. “The national museum is uniquely positioned to explore the connections between America’s vibrant religious traditions and American history.”

“The National Museum of American History is a flagship cultural institution and sets a path that many other museums follow,” said Christopher L. Coble, vice president for religion at Lilly Endowment. “We believe that a permanent curator for religion will help the museum build up its collections of religious artifacts and ensure that religion will remain an ongoing element of the Smithsonian’s interpretation of American life.”

An author and historian, Manseau earned his doctorate in religion from Georgetown University. His books include One Nation, Under Gods, a history of religious diversity in America; Vows, a memoir chronicling 20th-century Catholicism in the U.S.; the National Jewish Book Award-winning novel, Songs for the Butcher’s Daughter; and the travelogue Rag and Bone, which examines the use of relics in Buddhism, Christianity, Hinduism and Islam. He is the author of the upcoming companion book to the museum’s religion exhibition, Objects of Devotion, which will be published in spring 2017.

The exhibition opening June 28, 2017, “Religion in Early America,” will focus on the themes of religious diversity, freedom and growth as it explores the role of religion in America from the Colonial era thorough the 1840s. Some of the featured artifacts will be national treasures from the museum’s own collection, including George Washington’s christening robe from 1732, Thomas Jefferson’s The Life and Morals of Jesus of Nazareth, which is also known as “The Jefferson Bible,” Wampum beads and the cloak worn by abolitionist Quaker minister Lucretia Mott. Other objects will be on loan from museums, institutions and private individuals from across the nation. Among these are Massachusetts Bay Colony-founder John Winthrop’s communion cup, circa 1630; a Torah scroll on loan from New York’s Congregation Shearith Israel, founded in 1654; a chalice used by John Carroll, the first Roman Catholic bishop in the U.S. and founder of Georgetown University; and a first edition of the Book of Mormon. The objects will represent the diverse range of Christian, Native American and African traditions as well as Mormonism, Islam and Judaism that wove through American life during this era.

Religion Programming Through Music and Theater

On Nov. 5 and 6, the museum will present the first in a new program series, “Sounds of Faith” with “Waking the Ancestors: Recovering the Lost Sacred Sounds of Colonial America,” developed in partnership with Plimoth Plantation, a Smithsonian Affiliate museum. The arrival of the Mayflower on the shores of North America in 1620 forever transformed the lives of those living on the continent. Led by Richard Pickering, deputy executive director of Plimoth Plantation, the documentary theater program will explore the intersection of two musical traditions: hymns and psalms from the Church of England and Calvinist congregations and the sacred songs and dance of the Wampanoag, the indigenous people of Cape Cod, the Islands and southern Massachusetts. Information on this free public program can be found at http://americanhistory.si.edu/waking-the-ancestors. The second program in the series, “Jazz and Spirituality: From Ellington to Sun Ra and Beyond” will follow Dec. 9 and feature the Smithsonian Jazz Masterworks Orchestra (SJMO) with a special guest choir in an evening highlighting compositions by musicians inspired by spirituality, divinity and religion. This SJMO performance requires a purchased ticket. More information is available at http://SmithsonianJazz.org. Beginning in 2017, the museum will feature an annual theater program on religion and American history under its “History Alive!” theater series.

Funding for the religion initiative comes from Lilly Endowment, a private philanthropic foundation that supports causes in religion, education and community development. The exhibition, “Religion in Early America,” is made possible through the Taubman gift, which includes funding for a new gallery and changing exhibition program on the second floor of the museum’s west wing. Taubman is the president of Mozart Investments and the former director of Advance Auto Parts.

Through incomparable collections, rigorous research and dynamic public outreach, the National Museum of American History explores the infinite richness and complexity of American history. It helps people understand the past in order to make sense of the present and shape a more humane future. The museum is continuing to renovate its west exhibition wing, developing galleries on democracy, immigration and migration and culture. For more information, visit http://americanhistory.si.edu. The museum is located on Constitution Avenue, between 12th and 14th streets N.W., and is open daily from 10 a.m. to 5:30 p.m. (closed Dec. 25). Admission is free. For Smithsonian information, the public may call (202) 633-1000.