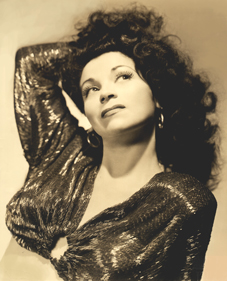 The National Museum of American History will present an on-stage conversation with pioneering Latina performer Diosa Costello, Saturday, Sept. 17, at 4 p.m. at the Smithsonian Castle. The program, featuring museum curators Dwight Blocker Bowers and Marvette Pérez, will include a donation of 11 costumes, including Costello’s iconic “Latin Bombshell” outfit and her costume from South Pacific to the museum’s permanent entertainment collections.

Costello (b. 1917) began her career in Spanish Harlem and got her big break when she co-starred in producer-director George Abbot’s 1939 Broadway musical Too Many Girls. Her support for the then-unknown Cuban entertainer Desi Arnaz resulted in a role that launched him in the U.S. Throughout her career she has appeared in Hollywood films such as They Met in Argentina and The Bullfighters; on Broadway, most notably as Bloody Mary in South Pacific; on music recordings; and alongside her husband, Cuban bandleader Pupi Campo.

“Diosa Costello was more than a performer,” said Pérez. “She was a producer, a club owner and, most significantly, a pioneer. As one of the first Latinas on Broadway, she paved the way for other Latinos. One of the last remaining members of her generation, her story and her costumes speak to the Latino influence on American performing arts.”

This program is part of the Smithsonian’s Hispanic Heritage Month celebration. For more information on events and programs, visit www.latino.si.edu.