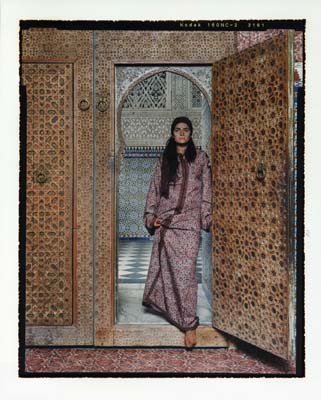 Lalla Essaydi, one of today’s most provocative and engaging visual artists, is the focus of a multimedia exhibition at the Smithsonian’s National Museum of African Art. “Lalla Essaydi: Revisions” will debut May 9 and run through Feb. 24, 2013. Essaydi, a Moroccan-born, New York-based artist, pushes the boundaries of Arab, Muslim, African and perceptions of women’s identities with her art, which includes themes of feminism, gender, identity and the private inner lives of women. Her work, which draws on Arabic calligraphy for its decorative and communicative potential, inscribes these spaces with a personal and feminine voice.

The exhibition features approximately 30 works of diverse media drawn from each of the artist’s photographic series, including the richly hued “Silence of Thought.” It also includes her better-known, “Converging Territories” and “Les Femmes de Maroc” works and includes a selection of rarely exhibited paintings and installation work. Developed by guest curator Kinsey Katchka, this is the first solo exhibition to bring together works of diverse media by this artist and it will feature new work exhibited for the first time.

“Lalla Essaydi’s work is visually stunning, as audiences will see,” said Johnnetta Betsch Cole, director of the National Museum of African Art. “Essaydi has used multiple artistic media to take on a central challenge: confronting deeply entrenched historical notions about femininity and womanhood through images of the Muslim world. Her work is vital and offers a fresh new voice and needed insight as it challenges the stereotype and perception of Arab, African and female identity. The beauty and brilliance of her work is singular.”

Essaydi is best known for her photographs featuring women clothed in white fabric inscribed with henna script against abstracted backgrounds draped in the same cloth. However, these well-known photographs represent a fraction of a broad body of work that excavates themes of gender, place, exoticism and history through color photography, painting and mixed-media installations. While each piece of Essaydi’s artworks can stand on its own, the impact is amplified when the individual works are viewed together, creating a visual dialogue of the ideas and themes the artist addresses.

In that holistic context, they display the depth of Essaydi’s engagement with different media, art historical conventions and diverse cultural histories, as well as her technical mastery of composition and color.

Essaydi, who has lived in Morocco, Saudi Arabia and France and now based in the United States, said, “In a sense I am a Western artist, making art in a style I was unable to use in my home country. I want to combine all these elements in order to engage myself as other.”

Born in Marrakech, Morocco, in 1956, Essaydi attended the École des Beaux-Arts in Paris from 1990 to 1994. After relocating to the United States, Essaydi earned a Bachelor of Fine Arts in 1999 from Tufts University and focused her studies on women and art. She continued her art education at the School of the Museum of Fine Arts, Boston, receiving a diploma in photography and installation art (1999) and a Master of Fine Arts in painting and photography (2003). She currently lives and works in New York, Boston and Marrakesh. Essaydi’s works have been featured in numerous solo and group exhibitions, and they are part of museum and private collections internationally, including the Art Institute of Chicago; Museum of Fine Arts, Houston; and the Museum of Fine Arts, Boston.

The exhibition will be accompanied by a fully illustrated exhibition catalog, with an essay by Katchka; excerpts from interviews with the artist spanning two years chronicling the conceptual development of her work; and an artist’s statement about each series represented in the exhibition.

In “Artist Talk” Thursday, May 10, 6:30 p.m.–8 p.m., Essaydi will discuss her new work in this exhibition with Katchka and the audience in the Lecture Hall. In addition, performances drawing on northern Africa for inspiration will be presented by the Sahara Dance Company July 25, 26 and 27. For further information, visit africa.si.edu.

The National Museum of African Art is the nation’s premiere museum dedicated exclusively to the collection, conservation, study and exhibition of Africa’s traditional and contemporary arts. The museum is open daily from 10 a.m. to 5:30 p.m., except Dec. 25. Admission is free. The museum is located at 950 Independence Avenue S.W., near the Smithsonian Metrorail station on the Blue and Orange lines. For more information, call (202) 633-4600 or visit the National Museum of African Art’s website at africa.si.edu. For general Smithsonian information, call (202) 633-1000.

Note to Editors: Photos from “Lalla Essaydi: Revisions” may be downloaded by visiting the museum’s media website at africa.si.edu and clicking on “press room.” To arrange an interview with the artists or curator contact Eddie Burke at (202) 633-4660 or BurkeE@si.edu.