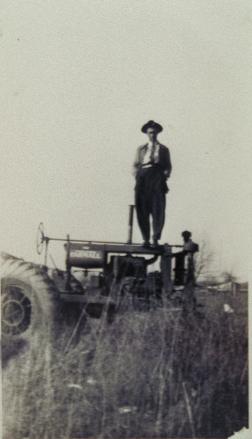 The morning will begin with a ceremony at 10 a.m. to retrieve soil from the Greer Family Farm, one of the oldest family farms in the community. Together with Smithsonian curator Paul Gardullo, members of the Greer family and representatives from the Lyles community will dig soil, a portion of which will be brought to the Smithsonian for display in the “The Power of Place” exhibition, one of the 12 inaugural exhibitions that will be on view when the museum opens Sept. 24.

“Devotion to the land runs deep in Lyles Station—the Greers, one of the first families in the community, have owned and worked this land as free black farmers since before the Civil War,” Gardullo said.

“That’s what family ties are all about here, to continue that dream that started way back in the 1840s that we have freedom, prosperity and unity of closeness,” said Stanley Madison, president of the Lyles Station Historical Corp.

A small community near the southern border of Indiana, 40 miles north of the Ohio River, Lyles Station offers a window into the largely unknown story of free black pioneers on the American frontier. African American farmers have been cultivating their own land in and near the area since 1815. Through two centuries of tumultuous change, the community of Lyles Station has rested on the pillars of home, farm, church and school—and on an unbroken history of land ownership. Lyles Station will be one of 10 places showcased at the museum in “The Power of Place” exhibition. In addition to the soil, the exhibition will feature farming tools, housewares and historic photographs from the community.

Following the soil dig, the celebration will continue at the Lyles Station Historical School and Museum, a public meeting space and center for learning about the history of the community along the Indiana African American Heritage Trail. Afternoon tours of Lyles Station Museum and School will be led by Madison, who will be joined by Gardullo and historian Anna-Lisa Cox.

“The Power of Place” exhibition uses the lens of place to immerse visitors in the broad diversity of the African American experience. A rich diversity of people, places and experiences—not all well known—will offer meaningful perspectives on the idea and impact of place and region in African American and American life across time. Visitors will understand “place” not just a physical or geographic location in the world, but also where culture is made, where memories and histories are kept and/or lost and where identities are created and recreated.

The Smithsonian’s National Museum of African American History and Culture will open Sept. 24 on the National Mall in Washington, D.C. The 400,000-square-foot building is being built on a five-acre tract adjacent to the Washington Monument at a cost of $540 million. While construction is moving forward, the museum is hosting public programs, organizing traveling exhibitions and producing books and recordings. Its eighth exhibition, “Through the African American Lens: Selections from the Permanent Collection,” is currently on view in the museum’s temporary gallery at the Smithsonian’s National Museum of American History. For more information, visit www.nmaahc.si.edu.