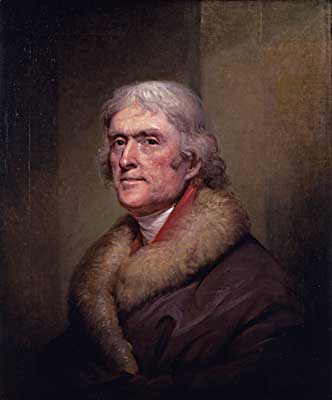 The Smithsonian’s National Museum of African American History and Culture and Monticello will present “Slavery at Jefferson’s Monticello: Paradox of Liberty,” an exhibition of artifacts—many never seen before—from excavations at Jefferson’s Virginia plantation and the Smithsonian collection. The exhibition will be on view in the NMAAHC Gallery in the National Museum of American History from Jan. 27 through Oct. 14.

Thomas Jefferson drafted the Declaration of Independence in 1776 and had called slavery an “abominable crime,” yet he was a lifelong slaveholder; one-fifth of the American population lived in slavery.

Visitors will come to know six slave families from the plantation as individuals—with names, family connections, jobs and achievements. The exhibition presents a rare and detailed look at the lives of these families—the Hemings, the Gillettes, the Herns, the Fossetts, the Grangers and the Hubbard brothers. The exhibit includes personal belongings and working tools, including scythes to cut wheat, axes, wheel jacks used to replace a wagon wheel, stoneware jars and carpentry tools as well as tableware, children’s toys and clothing accessories such as shoe buckles. In addition to the physical objects, the research gives a record of the families’ connections to one another, their religious faith and their efforts to pursue literacy and freedom.

“As a result of Jefferson’s assiduous record-keeping, augmented by 50 years of modern scholarly research, Monticello is the best-documented, best-preserved and best-studied plantation in North America,” said Leslie Greene Bowman, president of the Thomas Jefferson Foundation. “Through our partnership, Monticello and the Smithsonian have a unique opportunity to discuss slavery as the unresolved issue of the American Revolution and to offer Jefferson and Monticello as a window into the unfulfilled promise of ‘life, liberty, and the pursuit of happiness.’”

A highlight of the exhibition will be one of the Smithsonian’s most iconic objects—the portable desk used by Jefferson to draft the Declaration of Independence. The desk will be moved to the Monticello exhibit from its traditional location in the Museum of American History’s presidency exhibition.

A focal point of the exhibition will be archeological artifacts that belonged to enslaved families at Monticello. Among them:

The National Museum of African American History and Culture was established in 2003 by an Act of Congress, making it the 19th Smithsonian Institution museum. Scheduled for completion in 2015, it will be built on the National Mall in Washington, D.C., on a five-acre tract adjacent to the Washington Monument. Currently, during the pre-building phase, the museum is producing publications, hosting public programs and assembling collections. It is presenting exhibitions at other museums across the country and at its own gallery in the National Museum of American History. For more information about the museum, visit nmaahc.si.edu.

Thomas Jefferson Foundation was incorporated in 1923 to preserve Monticello, the home of Thomas Jefferson in Charlottesville, Va. Monticello is recognized as a National Historic Landmark and a United Nations World Heritage Site. As a private, nonprofit organization, the Foundation receives no regular federal or state budget support for its twofold mission of preservation and education. About 450,000 people visit Monticello each year. For information, visit www.monticello.org.

Note: The Hemings family members spelled their name with one or two “m”s. The Smithsonian and Monticello use the spelling that the individuals used. If there is no record, the single “m” is used.