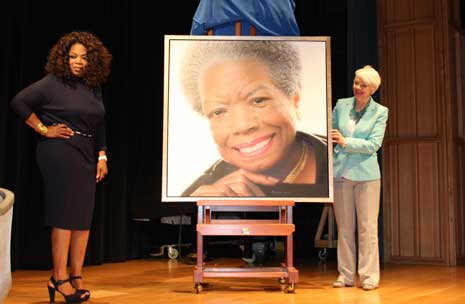 The Smithsonian’s National Portrait Gallery will install a painting of celebrated American writer, poet and activist Maya Angelou Thursday, May 29. The work will be on view through June 12 in the first-floor gallery where the museum memorializes the passing and celebrates the lives of people represented in the museum’s collection. The portrait was painted by artist Ross Rossin and unveiled at the museum in a ceremony that Angelou attended in April.

One of America’s most important writers and poets, Angelou wrote a series of seven autobiographical novels that are an indelible record of resistance and achievement by African Americans, particularly African American women. Angelou had a difficult and endangered childhood—shuttling back and forth between relatives in the North and South, she suffered from economic hardship and sexual abuse, which she documented in her first book, I Know Why the Caged Bird Sings (1969), and in subsequent volumes. Her subject was always her own life, and her autobiographies are not necessarily strictly factual or literally “true” but rather a retelling of emotional truths. A politically engaged writer, Angelou was also a poet; at President Bill Clinton’s inauguration in 1993, she read her poem “On the Pulse of the Morning.”

Angelou visited the National Portrait Gallery in April to unveil the painting. Surrounded by friends and family, she was interviewed by Johnnetta Betsch Cole, director of the Smithsonian’s National Museum of African Art. She spoke about her life and finding the patience and “…courage to look into one another’s face no matter what color, no matter what community to see one’s own self.” Addressing the concerns of young people today in particular, Angelou said, “I know that when you have love, you have patience with people who make mistakes. So it is important to first love yourself.”