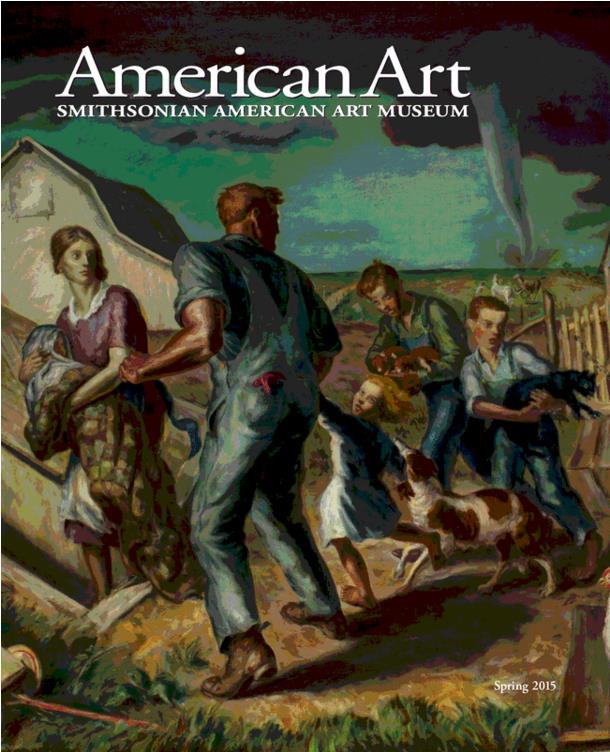 The editorial board of American Art, the Smithsonian American Art Museum’s peer-reviewed journal for new scholarship, has awarded the 2015 Patricia and Phillip Frost Essay Award to Lauren Kroiz for her article, “‘A Jolly Lark for Amateurs’: John Steuart Curry’s Pedagogy of Painting,” which appeared in the spring 2015 issue (vol. 29, no. 1). The jurors cited Kroiz’s excellent and compelling scholarship that combines research in local primary sources and wide reading in broader intellectual contexts such as sociology in the 1930s.

The Frost Award recognizes excellent scholarship in the field of American art history by honoring an essay, published the previous year in American Art, which advances the understanding of the history of the arts in America and demonstrates original research and fresh ideas. The award, established in 2004, is presented annually to the author of the most distinguished contribution to the journal and carries a $1,000 prize. Funding for this award is made possible through the Patricia and Phillip Frost Endowment.

Each year, a jury of three members of the journal’s editorial board selects the winner from articles, interviews and commentaries published in American Art during the previous calendar year. The 2015 jurors were François Brunet, professor of American art and literature at the Université Paris Diderot; Renée Ater, associate professor of art history at the University of Maryland; and Elissa Auther, Windgate Research Curator at the Museum of Arts and Design and the Bard Graduate Center in New York.

The jurors wrote of the prize-winning article, “[it] offers a refreshing, innovative approach to 1930s art, especially Regionalist art, and the complex cultural politics of Regionalism as a locus of anti-fascism, as well as an important site for dialogue between ‘serious’ art and the world of amateurs. In this, it suggests transversal connections with other domains of art and cultural history of the 20th century, such as photography, cinema and art education, and proposes a promising lead for American art history more broadly.”

Kroiz is an assistant professor in the history of art at the University of California, Berkeley. The author of Creative Composites: Modernism, Race, and the Stieglitz Circle (2012), she is currently completing a book on regionalist programs for art education, artistic labor and citizenship in the 1930s and 1940s. Her research interests include the history and theory of photography and new media, race and ethnic studies, and the relationships between regionalism, nationalism and globalism. Kroiz received a doctorate from the Massachusetts Institute of Technology in 2008 and a bachelor’s degree from the University of Chicago in 2002.

The journal American Art is part of the museum’s active publications program, which also includes books and exhibition catalogs. It is produced by the museum’s Research and Scholars Center, which also administers fellowships for predoctoral, postdoctoral and senior scholars and offers unparalleled research databases and extensive photographic collections documenting American art and artists.

Information about subscribing, purchasing single issues or submitting articles to the journal, which is published for the museum by the University of Chicago Press, is available online, www.press.uchicago.edu/ucp/journals/journal/amart.html. A complete list of past Frost Essay Award winners and additional information about the award are available on the museum’s website, americanart.si.edu/research/awards/frost.