Jerusalem Opens at the National Museum of Natural History Nov. 22 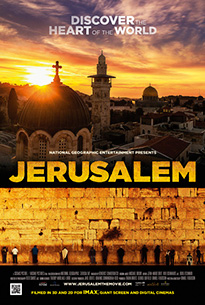 Jerusalem will launch in 3-D at the Samuel C. Johnson IMAX Theater at the Smithsonian’s National Museum of Natural History Nov. 22. Tickets are on sale now at www.si.edu/imax.

Jerusalem, sacred to half the people on Earth, has been fought over for millennia. It has been conquered and destroyed, rebuilt and reinvented repeatedly for 5,000 years. Jerusalem, the new 3-D giant-screen film adventure from National Geographic Entertainment, explores on a grand scale the intersection of science, history and religion in this ancient, enigmatic place.

Narrated by Benedict Cumberbatch (Star Trek into the Darkness, PBS’s Sherlock), Jerusalem gives audiences a rare glimpse of the storied city and exclusive access to iconic holy sites, including the Western Wall, Dome of the Rock, Church of the Holy Sepulchre, Jordan River, Sea of Galilee and Masada, in addition to lesser-known parts of the region.

Jerusalem presents the story from many perspectives—interviewing a prominent archaeologist and following real-life inhabitants of the ancient city to explore the enduring appeal of this unique crossroads of civilization. Audiences will also meet three teenagers who call Jerusalem home—Farah Ammouri, Revital Zacharie and Nadia Tadros—from each of the three major world religions that share it: Judaism, Christianity and Islam.

With thousands of archaeological sites, Jerusalem is one of the most excavated cities on the planet with more to be discovered. Since 2010, the Jerusalem production team has followed several excavations in and around Jerusalem, documenting their progress and the tools used to uncover and understand the past. The film features archaeologist and religious studies professor Jodi Magness of the University of North Carolina at Chapel Hill, who explains the many layers that chronicle this important crossroads of civilizations.

In the film, Magness leads a group of students through an ancient water tunnel beneath the biblical-era city of Jerusalem, which conveyed water from the Gihon Spring outside the city walls to the residents of the city in the event of a siege by an invading army. She also gives audiences a tour of excavations around the Western Wall, marveling at one of the greatest feats of engineering in the ancient world.

Jerusalem is an original production from Cosmic Picture and Arcane Pictures and distributed by National Geographic Entertainment. The 43-minute large-format film was executive produced by the late Jake Eberts (Gandhi, Chariots of Fire, Dances with Wolves); produced by Taran Davies, George Duffield and Daniel Ferguson; and written and directed by Daniel Ferguson. Large-format industry-veteran Reed Smoot is the director of photography. For more information about the film, including links to the trailer and behind-the-scenes footage, the public can visit www.jerusalemthemovie.com, go to facebook.com/jerusalemthemovie and follow on Twitter @Jerusalem_Movie, #jerusalemfilm.

Individual tickets for Jerusalem are on sale now and may be purchased up to two weeks in advance. Groups of 10 or more may reserve tickets now for any date during the film’s expected run. The public may visit any Smithsonian Theaters box office, call (866) 868-7774 or visit www.si.edu/IMAX for information and to purchase tickets.