Island of Lemurs: Madagascar Opens at the National Museum of Natural History April 4 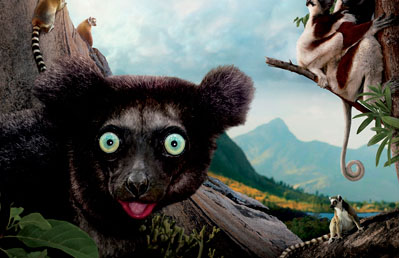 Island of Lemurs: Madagascar will launch in 3-D at the Samuel C. Johnson IMAX Theater at the Smithsonian’s National Museum of Natural History April 4. Tickets are on sale now at www.si.edu/imax.

Captured with IMAX 3-D cameras, Island of Lemurs: Madagascar takes audiences on a spectacular journey to the remote and wondrous world of Madagascar. Lemurs arrived in Madagascar as castaways millions of years ago and evolved into hundreds of diverse species, but they are now highly endangered. Audiences will be introduced to trailblazing scientist Patricia Wright on her lifelong mission to help these strange and adorable creatures survive in the modern world.

Individual tickets for Island of Lemurs: Madagascar are on sale now and may be purchased up to two weeks in advance. Groups of 10 or more may reserve tickets now for any date during the film’s expected run. The public may visit any Smithsonian Theaters box office, call (866) 868-7774 or visit www.si.edu/IMAX for information and to purchase tickets.