“Isamu Noguchi, Archaic/Modern” Presents a Fresh Perspective on the Innovative Vision of This Modern Master 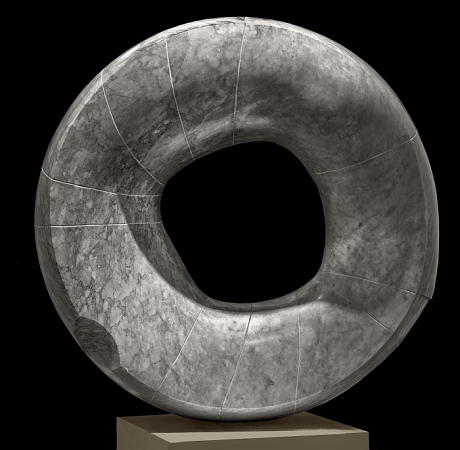 Isamu Noguchi (1904–1988) was among the most innovative American sculptors of the 20th century. His design for “Sculpture to Be Seen from Mars” (1947) anticipates the space age by several decades. Even as he created works that were far ahead of his time, Noguchi frequently found inspiration in ancient art and architecture—from Egyptian pyramids and Buddhist temples to Zen gardens and American Indian burial mounds. “Isamu Noguchi, Archaic/Modern” explores how the ancient world shaped this artist’s vision for the future.

“Isamu Noguchi, Archaic Modern” is on view in the museum’s main building from Nov. 11 through March 19, 2017. Dakin Hart, senior curator at The Noguchi Museum, and Karen Lemmey, curator of sculpture at the Smithsonian American Art Museum, organized the exhibition. The Smithsonian American Art Museum is the sole venue for this exhibition, which is expanded from an earlier installation at The Noguchi Museum.

“Isamu Noguchi—born in Los Angeles, raised and educated in Japan, Indiana, New York and Paris—was among the first American artists to think like a citizen of the world,” said Betsy Broun, The Margaret and Terry Stent Director of the Smithsonian American Art Museum. “The exhibition is the latest in a series of major shows to examine the contributions of such international artists as Nam June Paik, Christo, Yasuo Kuniyoshi and Tamayo, and their broad perspectives.”

“Isamu Noguchi, Archaic/Modern” brings together 74 works, nearly all on loan from The Noguchi Museum, made during the artist’s six-decade career. The artworks reflect Noguchi’s striving for timelessness through the abstraction of things, places and ideas. Featured works—including several monolithic basalt sculptures, fountains, designs for stage sets and playgrounds and floating Akari light sculptures—are organized in themes of particular interest to Noguchi: landscape, invention, the atomic age, outer space and social spaces. Noguchi saw himself as both artist and inventor, and the exhibition devotes special attention to his patented designs, such as “Radio Nurse,” the first baby monitor.

“The juxtaposition of the terms ‘archaic’ and ‘modern’ is an attempt to fold space-time in a way that is true to Noguchi’s attempts to make the practice of sculpture an expression of relativity in the modern, Einsteinian sense,” said Hart. “Noguchi exists somewhere in the fusion of these two abstract notions of time, and my hope is that by exhibiting his sculptures in thematic groupings we add to the scope of their meaningfulness and highlight the adaptability of Noguchi’s values to the future.”

“Noguchi’s work—which encompasses tradition and progress, the timeless and the modern—still resonates with contemporary audiences despite being created decades ago,” said Lemmey. “It is particularly wonderful to see the museum’s ‘Grey Sun,’ which was a gift from Noguchi, in this broader context that shows how ahead of his times Noguchi was with his unique perspective on global culture.”

A ticketed presentation of “Cave of the Heart” by the Martha Graham Dance Company will take place in the museum’s McEvoy Auditorium Friday, March 3, 2017, at 7 p.m. This powerful, one-act performance features a set and costume created by Noguchi that is considered an extension of the dancers’ movements. Tickets for this special opportunity to see Noguchi’s work come alive through dance will be available for purchase online for $30 beginning Jan. 30, 2017, at americanart.si.edu/marthagraham. Tickets are non-refundable. Support for this program comes from the Secretary of the Smithsonian and the Smithsonian National Board.

Hart will present the central ideas of the exhibition in a talk in the museum’s McEvoy Auditorium Thursday, Dec. 1, at 6 p.m. The 21st Century Consort will perform music that accompanied dance performances by modern-dance icons Martha Graham and Merce Cunningham, both of whom collaborated with Noguchi, and other pieces inspired by Noguchi’s modernism Saturday, Feb. 4, 2017; a pre-concert discussion at 4 p.m. is followed by the concert at 5 p.m.

Several gallery talks will take place in the exhibition; Lemmey will lead a tour Wednesday, Jan. 11, 2017, at 5:30 p.m. and Wednesday, Feb. 8, 2017, at 5:30 p.m. and Ariel O’Connor, dancer-turned-objects-conservator at the museum, will discuss materials used by the artist and his collaboration with Graham Tuesday, Nov. 15, at 4 p.m. and Thursday, Jan. 12, 2017, at noon. The museum will present a series of films about Noguchi, in collaboration with the Smithsonian’s Freer Gallery of Art and Arthur M. Sackler Gallery, Saturday, Dec. 10, from 3 to 6:30 p.m., including Isamu Noguchi (1972) with Buckminster Fuller and directed by Christian and Michael Blackwood, the avant-garde short Visual Variations on Noguchi (1945) directed by Marie Menken and The Face of Another (1967) directed by Hiroshi Teshigahara. Details about all the exhibition-related programming are available online at americanart.si.edu/calendar.

The exhibition’s accompanying catalog includes an essay by Hart that traces themes in the artist’s 60-year career—an expansive vision that ranged from landscape art to garden and playground designs, from sculptures featuring planets and outer space to those grappling with the atomic age, and from patented lamps and furniture to modern dance sets and costumes. More than 60 full-color plates highlight the timeless appeal of this thoroughly modern artist. The book, published by the museum in association with D Giles Limited, London, is available in the museum store and online ($45).