Road Expanded the Power and Reach of the South American Empire
May 14, 2015
News Release 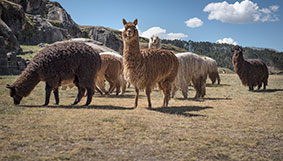 The Smithsonian’s National Museum of the American Indian will present “The Great Inka Road: Engineering an Empire,” the first major bilingual exhibition on one of the greatest civilizations in South America, June 26 through June 1, 2018. It will explore why and to what end the Inka Road was built more than 500 years ago, and how its construction, without the use of metal or iron, the wheel or stock animals to pull heavy loads, stands as one of the greatest engineering feats.

The museum uses the Inka spelling rather than the more common Inca because it is consistent with the usage of the original traditional South American language of Quechua and in line with the museum’s policy on Native-language preservation.

The paved road is more than 24,000 miles in length, runs north to south crossing through Argentina, Bolivia, Chile, Colombia, Ecuador and Peru. The Inka Road engaged impressive engineering strategies in response to the challenges presented by the rugged Andes mountains. This landscape ranges from coastal desert to high plateau and uneven cordillera (a system of mountain ranges) separated by valleys characterized by biodiversity and many unique ecosystems.

Through images, maps, models and 140 objects, including a ceramic Chavín stirrup spout bottle (the oldest item in the exhibition, ca. 800–100 B.C.), impressive gold ornaments, necklaces made from shells from the Lambayeque region, stone carvings, silver and gold figurines, and various textiles made from camelid hair and cotton. These items illustrate important concepts in Andean cosmology, the principles of duality, reciprocity and integration, and offer examples of the road’s infrastructure and spirituality.

The Inka Empire, the final period of autonomy and pure indigenous tradition in South American history, began in the 14th century and flourished until the Spanish invasion in 1532. Throughout its 100 years of use, the extensive road served as a complex network and major axis for communication, transportation, expansion, administration and political control of vast and varied territories throughout the Inka Empire. After the Spanish invasion, the road lost its original symbolism and its political meaning, but it never lost its significance as a symbol and sacred space to indigenous people in the region. Contemporary descendants of the Inka continue using the road system and millions of people still speak the native languages of Quechua and Aymara. The Inka Empire ultimately transformed the world through the dissemination of important crops, minerals and medicines.

The exhibition will unfold the history of the Inka Empire in 11 sections:

Exhibition curators Ramiro Matos (Quechua) and José Barreiro (Taíno) have spent the past six years researching, traveling and documenting the Inka Road in preparation for this exhibition.

“The Inka are one of the primary examples of the achievements of the indigenous people in the Western Hemisphere,” said Kevin Gover (Pawnee), director of the museum. “Their knowledge, their understanding of their environment, their agriculture and, of course, their engineering all remain infinitely interesting and instructive particularly in a world that is grappling with some quite near existential challenges of sustainability. There is knowledge to be gained from the examination of these indigenous cultures not simply for the sake of gathering knowledge, but for its application in our contemporary lives.”

A two-day symposium, “The Great Inka Road: Engineering an Empire,” will be held Thursday, June 25, at 1:30 p.m. and Friday, June 26, at 9 a.m. in the Rasmuson Theater. It will look at the material, political, economic and religious structures that joined more than 100 Native nations and millions of people in the powerful Native confederation known as the Tawantinsuyu. Noted international scholars, writers and engineers will discuss how the Inka organized the Andean world of the 15th and early 16th centuries, using the Qhapaq Ñan (the Road of the Lord), the empire’s 24,000-mile sacred roadway, to connect vast territories that covered the whole or parts of six modern republics: Argentina, Bolivia, Chile, Colombia, Ecuador and Peru. Qhapaq Ñan is a monumental engineering achievement that UNESCO recently recognized as a World Heritage site. Many sections of the Inka Road are still used today and continue to be revered as sacred spaces and symbols of cultural continuity.

The exhibition is accompanied by a book, The Great Inka Road: Engineering an Empire, which is edited by Matos and Barreiro and features 23 essays on four main themes: the Andean landscape and the city of Cusco; Inka engineering; the four regional divisions of the empire and the ways the Inka Road system linked them; and the “living” road from the colonial era to the present. Beautifully designed and featuring more than 175 full-color illustrations, the book offers a fascinating view of an enduring symbol of the Inka Empire’s strength and adaptability. For more information about the book or to purchase a copy, visit www.nmaistore.si.edu or call 800-242-NMAI (6624). Museum members receive a 20 percent discount.

In conjunction with the Smithsonian’s 2015 Folklife Festival program “Perú: Pachamama,” the Festival Marketplace will be open from Wednesday, June 24, through Sunday, July 12, in the museum’s Potomac Atrium. This is a once-a-year opportunity to share the inspired—and inspiring—sights and sounds of the Smithsonian Folklife Festival. Shoppers will find beautiful works created by the Festival participants demonstrating their craft on the National Mall, including jewelry, textiles, baskets, books, toys, pottery, clothing, sculpture and paper arts.

For more information, visit www.AmericanIndian.si.edu. To join the conversation, follow the museum’s Twitter feed, @SmithsonianNMAI, and use the hashtags #InkaRoad or #Peru2SI.

In 2010, twenty-five Quechua families took a caravan of llamas from their home village, Chawaytiri, in the highlands of Peru, to the city of Pisac. The participants invited the National Museum of the American Indian to document the journey and the cultural knowledge and ceremonies that surround it. The community's message? "Let us be careful not to lose the ways and customs of our ancestors, so that nothing useful disappears."

In Quechua with English subtitlesto come. Produced by the National Museum of the American Indian, Smithsonian Institution, with the Museo Comunitario P´isaq and the Municipalidad Distrital de P´isaq.

To read more about the museum's collaborative research with the people of Chawaytiri, and the larger Inka Road project, please see http://blog.nmai.si.edu/main/inka-road/.