How Will Warming Affect Tropical Forests? 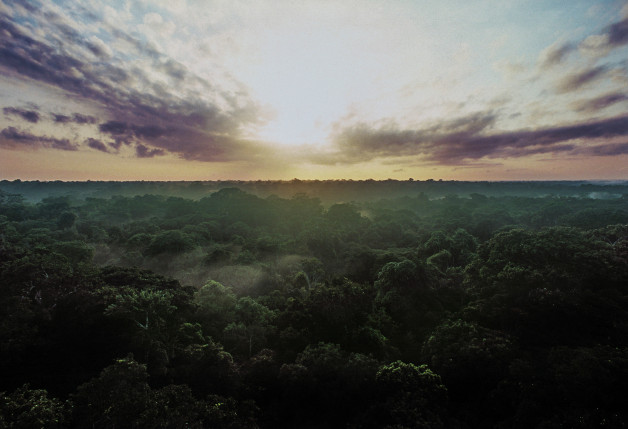 Tropical forests, the lungs of the planet, absorb massive amounts of carbon dioxide gas—a primary contributor to global warming. However, the state of tropical forests is shifting under a warming climate, and it is largely unknown if tropical forests will continue to provide such large offsets for carbon emissions throughout the next century.

The best models predicting how tropical forests will respond to global warming are based on abstract “ideal trees.” The Smithsonian will contribute data drawn from a study of 6 million real trees representing 10,000 tree species to a new forest-modeling project led by the U.S. Department of Energy’s Lawrence Berkeley National Laboratory.

With input from the Smithsonian and many other institutions and disciplines, the resulting model will show how rising temperatures, shifting precipitation patterns, increasing greenhouse gas levels and other natural and human-induced changes affect tropical forests’ influence on the Earth’s climate.

“This new modeling effort is an amazing opportunity for us to connect 30-plus years of data about tree biodiversity, growth and survival in the tropics with expertise in long-term modeling,” said Stuart Davies, director of the Center for Tropical Forest Science-Forest Global Earth Observatories (CTFS-ForestGEO) at the Smithsonian Tropical Research Institute.

“In existing models there’s no subtlety, nothing that reflects nature’s diversity and ability to make trade-offs and evolve,” said Davies. “With data from the CTFS-ForestGEO, network modelers can build complex models based on leaf nitrogen content, seed size, wood density and a host of other real functional diversity traits.”

The first three years of the planned 10-year, $100 million Next Generation Ecosystem Experiments-Tropics (NGEE-Tropics) program has been funded at $25 million. Approximately $1.2 million will go to CTFS-ForestGEO to fund post-doctoral fellows, field data collection, workshops and core support for the CTFS-ForestGEO network of 62 study sites around the world. This is on top of $200,000 received by CTFS-ForestGEO during the planning phase.

“Tropical forests cycle more carbon and water than any other biome, and as such they’re a critical player in the planet’s energy balance and in climate change,” said Jeff Chambers, an ecologist in Berkeley Lab’s Earth Sciences Division and the principal investigator and project director of NGEE-Tropics. “But there’s a lot we don’t know. Through NGEE-Tropics, we plan to dramatically reduce this uncertainty to improve future climate projections.”

The effort will include researchers from the Smithsonian Tropical Research Institute, the U.S. Forest Service, the National Center for Atmospheric Research, NASA and several institutions from other nations, including Brazil’s National Institute of Amazonian Research, and collaborators from Brookhaven, Los Alamos, Oak Ridge and Pacific Northwest national laboratories.

The model will capture myriad soil and vegetation processes at a resolution better than 10 kilometers. During the first phase of the project, scientists will assess what is known about tropical forest ecosystems and how well these processes are represented in models. Several pilot field studies will link modeling advances with field observations.

At the Smithsonian Tropical Research Institute in Panama, scientists will use detailed datasets of tree species across regions to understand which characteristics enable some species to thrive under warmer or drier conditions, while others perish. The research will shed light on how forests dynamically respond to a warming climate.

Another high-priority study in Manaus, Brazil, will investigate changes in the forest carbon cycle resulting from low water supply during the dry season from June through September. Some tropical regions will experience more frequent droughts in the future, leading to tree death and potential releases rather than accumulations of carbon.

In Puerto Rico, NGEE-Tropics scientists will study the effects of soil on forests that are regenerating on abandoned agricultural land. These secondary-growth forests are known to take up carbon dioxide from the atmosphere and store it for decades, but the rate of uptake is thought to depend on soil fertility. The research will involve measurements of phosphorous and nitrogen across different soil types. It will also involve airborne instruments, such as LiDAR (Light Detection and Ranging) to measure the forest structure and optical sensors to study the chemistry of the forest canopy.

Ultimately, the scientists will integrate what they learn from the pilot studies, and the more extensive field investigations in phases two and three, into their new tropical-forest model. Combining global-scale models with on-the-ground forest data will dramatically improve predictions about how the world’s forests will respond to global change and help counter increasing carbon emissions.

The Smithsonian Tropical Research Institute, headquartered in Panama City, Panama, is a unit of the Smithsonian Institution. The institute furthers the understanding of tropical nature and its importance to human welfare, trains students to conduct research in the tropics and promotes conservation by increasing public awareness of the beauty and importance of tropical ecosystems. Website: www.stri.si.edu.

The Center for Tropical Forest Science-Forest Global Earth Observatories (CTFS-ForestGEO) is a global network of forest research plots and scientists dedicated to the study of tropical and temperate forest function and diversity. The multi-institutional network comprises more than 60 forest research plots across the Americas, Asia and Europe, with a strong focus on tropical regions. CTFS-ForestGEO monitors the growth and survival of approximately 6 million trees and 10,000 species. www.forestgeo.si.edu