The Hobbit: An Unexpected Journey Launches at Smithsonian IMAX Theaters Dec. 21 and Dec. 28 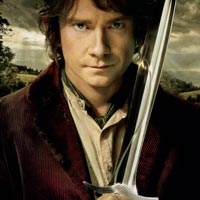 The film follows title character Bilbo Baggins, who—along with the wizard Gandalf and 13 dwarves, led by the legendary warrior Thorin Oakenshield—is swept into an epic quest to reclaim the lost Dwarf Kingdom of Erebor from the fearsome dragon Smaug. Along the path, the unassuming Bilbo Baggins not only discovers depths of ingenuity and courage that surprise even him, he also gains possession of a “precious” ring tied to the fate of all Middle-earth in ways he cannot begin to know.

The IMAX release of The Hobbit: An Unexpected Journey has been digitally re-mastered into the image and sound quality of An IMAX Experience with proprietary IMAX Digital Re-mastering technology. The crystal-clear images coupled with IMAX’s customized theater geometry and powerful digital audio create a unique environment that will make audiences feel as if they are in the movie.

The PG-13 rated film runs 165 minutes and is directed by Jackson. The screenplay is by Fran Walsh, Philippa Boyens, Jackson and Guillermo del Toro. Jackson also produced the film, with Carolynne Cunningham, Zane Weiner and Fran Walsh.  The executive producers are Alan Horn, Toby Emmerich, Ken Kamins and Carolyn Blackwood, with Boyens and Eileen Moran serving as co-producers. The film is a production of New Line Cinema and Metro-Goldwyn-Mayer Pictures, with New Line managing production and is distributed by Warner Bros. Pictures.

Tickets are now available. Individuals may reserve and purchase tickets up to two weeks in advance. The public may visit any Smithsonian Theaters box office, call (866) 868-7774 or visit www.si.edu/IMAX for information and to purchase tickets.