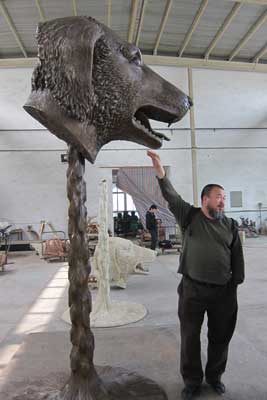 The Hirshhorn presents “Circle of Animals/Zodiac Heads,” a monumental 12-part sculptural suite by Ai Weiwei (Chinese, b. Beijing, 1957). Installed around the perimeter of the fountain on the museum’s plaza, the work will be on view from April 19 until Feb. 24, 2013. The historically resonant piece paves the way for “Ai Weiwei: According to What?” the first U.S. retrospective of the artist’s work, which opens at the Hirshhorn Oct. 7.

One of China’s most prolific and provocative contemporary artists, Ai is known for such major projects as the installation “Fairytale” at Documenta 12 in 2007 and his collaboration with architects Herzog & de Meuron on the design for the main stadium for the 2008 Olympic Games in Beijing, as well as for his embrace of the Internet and social media as active platforms for commentary and art forms in their own right. Throughout his career, he has offered insights into the interrelations between art, society and individual experience and has explored such universal topics as culture, history, politics and tradition.

“Circle of Animals/Zodiac Heads” comprises a dozen bronze sculptures, each roughly 10 feet tall, that represent the signs of the Chinese zodiac: 11 real-world animals (snake, horse, ram, monkey, rooster, dog, pig, rat, ox, tiger and rabbit) and one mythical creature (dragon). The sculptures are reenvisioned and enlarged versions of the original 18th-century heads that were designed during the Qing dynasty for the fountain clock of the Yuanming Yuan [Garden of Perfect Brightness], an imperial retreat outside Beijing, and which were pillaged in 1860 by invading Europeans. The ownership of the original works remains the subject of international controversy, with various Chinese collectors making a bid to reunite all 12 figures. The location of five figures currently remains unknown.

By sending the entire suite of sculptures on a world tour that has already reached São Paulo, New York, London, Los Angeles, Taipei and Houston, Ai reexamines the fraught history of the originals. “My work is always dealing with real or fake authenticity, and what’s the value and how the value relates to current political and social understandings and misunderstandings,” said Ai. “I think [there’s] a strong humorous aspect there. So I wanted to make a complete set [of zodiac heads], including the seven original and the missing five.”

Although the disposition of the original sculptures is largely couched in the language of repatriation, Ai throws into question the importance of the Yuanming Yuan heads to China. “I don’t think that it’s a national treasure,” he said. “It has nothing to do with national treasure. It was designed by an Italian and made by a Frenchman for a Qing dynasty emperor, which actually is somebody who invaded China. So if we talk about ‘national treasure,’ which nation do we talk about?”

Ai sees his use of the zodiac heads as a link in a longer historical chain, observing that the Qing dynasty heads were themselves based on Tang dynasty renderings. At the same time, he notes the ability of the subject to transcend any historical context. To viewers coming unawares upon the zodiac heads, “They’re just animals.”

When installed around the Hirshhorn’s fountain, “Circle of Animals/Zodiac Heads” will advance Ai’s program of democratizing public space. “I think the public deserves the best,” he said. “Before, only a pope or an emperor could see those kinds of things.”

At the same time, the work will serve as a harbinger of the major retrospective “Ai Weiwei: According to What?” which originated at the Mori Art Museum in Tokyo in 2009. Now revised and updated to include recent works and organized in close collaboration with the Mori, the artist and his studio, the exhibition starts its U.S. tour at the Hirshhorn, the only venue where it will be accompanied by “Circle of Animals/Zodiac Heads.” In conjunction with the Hirshhorn’s presentations of Ai’s work, the Smithsonian’s Arthur M. Sackler Gallery will present “Perspectives: Ai Weiwei” from May 12 to April 7, 2013, and the Corcoran Gallery of Art will exhibit “Untitled,” from Sept. 22 to Jan. 13, 2013.

Regarding the two upcoming presentations of Ai’s work, Hirshhorn Director Richard Koshalek said, “This exhibition directly reflects the Hirshhorn’s priorities now and for the future, as we anticipate the museum’s upcoming 40th anniversary. We are especially interested in cultivating an increased focus on the artist’s presence throughout the museum, the curating of all of our public spaces, both interior and exterior, deep research and thematic content in the service of richly educational experiences and the artistic deployment of new social media and its effects on cultural institutions. We are pleased to work with Ai Weiwei, an artist who addresses these issues in his work and who occupies a central place in contemporary art overall.”

“Ai Weiwei: Circle of Animals/Zodiac Heads” is organized by the Hirshhorn Museum and Sculpture Garden and AW Asia. Crozier Fine Arts is the official logistical partner for this exhibition.

The Hirshhorn offers a range of interactive educational experiences designed to engage people of all interest levels in contemporary art. On Saturday, April 21, at 11 a.m. and 2 p.m., an episode of Art21’s award-winning public television program “Art in the Twenty-First Century” titled “Change,” which includes a segment on Ai, screens in the Ring Auditorium. Artists and other experts address “Circle of Animals/Zodiac Heads” in depth in several Friday Gallery Talks; consult hirshhorn.si.edu for a complete schedule. The museum’s library of podcasts makes gallery walk-throughs and interviews with artists accessible internationally.

To accompany the exhibition “Ai Weiwei: According to What?” the Hirshhorn, the Mori and Prestel will co-publish a full-color catalog featuring essays by exhibition curator Mami Kataoka and art historian Charles Merewether and a conversation between Hirshhorn deputy director and chief curator Kerry Brougher and Ai. To accompany this presentation of “Circle of Animals/Zodiac Heads,” there are two full-color catalogs: a scholarly publication on the history of the work (published by Prestel, 2011) and a souvenir-style museum guide (published by AW Asia, 2011).

The Hirshhorn Museum and Sculpture Garden, the Smithsonian Institution’s museum of international modern and contemporary art, has nearly 12,000 paintings, sculptures, photographs, mixed-media installations, works on paper and new media works in its collection. The Hirshhorn presents varied exhibitions and offers an array of public programs that explore modern and contemporary art. Located at Independence Avenue and Seventh Street S.W., the museum is open daily from 10 a.m. to 5:30 p.m. (except Dec. 25). Admission to the galleries and special programs is free. For more information about exhibitions and events, please visit hirshhorn.si.edu. Follow the Hirshhorn on Facebook at facebook.com/hirshhorn and on Twitter at twitter.com/hirshhorn. To request accessibility services, please contact Kristy Maruca at marucak@si.edu or (202) 633-2796, preferably two weeks in advance.