Hirshhorn Presents “Ai Weiwei: According to What?” 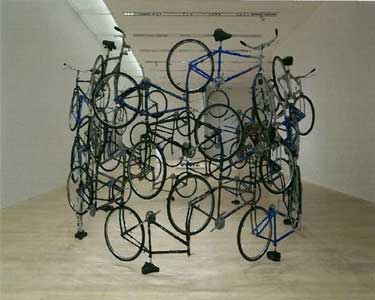 “Ai Weiwei: According to What?,” the first North American survey of the work of the foremost figure to emerge from the rapidly expanding Chinese contemporary art scene, will be on view at the Smithsonian’s Hirshhorn Museum Oct. 7 through Feb. 24, 2013. Encompassing sculpture, photography, installation, video and audio work, this full-floor exhibition has been significantly revised and updated from the 2009 version of the show organized by the Mori Art Museum in Tokyo. It features many works made since 2009, when the Hirshhorn began working with the Mori on the current version of the exhibition, including several that have never been exhibited before.

Ai Weiwei (Chinese, b. Beijing, 1957) is known for such major projects as “Fairytale,” for which he brought 1,001 Chinese citizens to Documenta 12 in 2007; his collaboration with architects Herzog & de Meuron on the design for the main stadium—the “Bird’s Nest”—for the 2008 Olympic Games in Beijing; and his installation of 100 million hand-painted porcelain sunflower seeds in the Tate Modern’s Turbine Hall in 2010. He has also garnered attention for embracing the Internet and social media as active platforms for commentary and art forms in their own right. Throughout his career, he has offered insights into the interrelations between art, society and individual experience and has explored such universal topics as culture, history, politics and tradition.

“Ai brings our minds and our very being back to a fundamental way of thinking,” said the exhibition’s curator, Mami Kataoka, chief curator at the Mori Art Museum. “One common thread running through his work is that it forces us to face the basic, existential question of ‘According to what?’”

The organizing curators of the Hirshhorn presentation are deputy director and chief curator Kerry Brougher and assistant curator Mika Yoshitake.

“Ai Weiwei: According to What?” occupies the full circuit of the second-level galleries and spaces on the third level. “Cube Light” (2008), a seminal work in the artist’s chandelier series and a major acquisition by the Hirshhorn, occupies an entire gallery. Nearly 14 feet on each side, the piece both echoes and plays with the minimalist form established by artists such as Donald Judd. At the same time, Ai cites the example of Sergei Eisenstein’s 1928 film October, in which a chandelier, shaking during the storming of the Winter Palace, represents the instability of a government on the brink of collapse.

“Ai Weiwei: According to What?” will travel to four venues in the U.S. and Canada, but only at the Hirshhorn will the exhibition be accompanied by “Ai Weiwei: Circle of Animals/Zodiac Heads,” a monumental 12-part sculptural suite by the artist. Installed around the perimeter of the fountain on the museum’s plaza, the work will also be on view until Feb. 24, 2013. “These exhibitions are highly appropriate to the Hirshhorn’s expanding international engagement and sphere of action,” said Hirshhorn Director Richard Koshalek. “As the museum approaches its 40th anniversary, this larger outlook pertains not only to exhibitions that go beyond more conventional offerings, but to the curating of public space, significant acquisitions such as ‘Cube Light’ and educational programs that bespeak deep research and thematic content relevant to contemporary life.”

Since 2009 Ai has become increasingly known for his outspoken political activism, which takes numerous forms and resulted in his detention in 2011 for 81 days by Chinese authorities. “I’ve experienced dramatic changes in my living and working conditions over the past few years,” Ai has stated, “and this exhibition has been an opportunity to reexamine past work and communicate with audiences from afar. I see it as a stream of activities rather than a fixed entity. It is part of a continual process in self-expression.” (A full version of the statement issued by Ai in April 2012 is available on the Hirshhorn’s website: Ai Statement.)

Although Ai began his career in 1979, and in 1980 became a member of The Stars, China’s first group of avant-garde artists, his sensibility developed more fully after he moved to the U.S. in 1981 and engaged with the work of Marcel Duchamp, Andy Warhol and Jasper Johns, whose 1964 painting “According to What” provides the title for the current exhibition. Ai’s “New York Photographs” (1983–93) chronicle his years on the periphery of the downtown scene.

In 1993 Ai’s father, renowned poet Ai Qing, became ill and his son returned to a swiftly modernizing China. Ai then took up themes that occupy him to this day: the determination of artistic value, the meaning of history to a future-oriented culture, the changing role of traditional craftsmanship, the repurposing of utility into aesthetics and argument.

All of these threads come together in a signature work for the artist, “Dropping a Han Dynasty Urn” (1995/2009), a photographic triptych documenting Ai’s destruction of a piece of pottery that was venerated precisely because it was made roughly 2,000 years ago. In this and other works in which the artist destroys the old to create the new, such as “Coca-Cola Vase” (2007) and his ongoing series of “Colored Vases,” Ai raises questions about the definition and endurance of cultural value. In his repurposed furniture series, Ai again reimagines existing objects, in this case transforming decorative and utilitarian antiques into contemporary art objects, drawing attention to materials and craftsmanship. For “Grapes” (2010), a number of wooden stools from the Qing Dynasty (1644–1911) have been rejoined by artisans into a spiky cluster—seats in, legs out—reaestheticizing objects that might be seen to have outlived their usefulness. “Table with Two Legs on the Wall” (2008) is a dramatic alteration of another Qing antique. Split in two and rejoined at a right angle, the tabletop is at cross-purposes with itself. Half of it functions as it originally did, being level with the floor. The other half, rising perpendicular to the first, its legs perched against the wall, now serves to keep the structure from toppling over.

Many of Ai’s recent works have been the direct result of his concerns about the aftermath and victims of the Sichuan earthquake in 2008. “Sichuan Earthquake Photos” (2008– ) offer blunt visual evidence of the damage. Ai has made multiple pieces commemorating the more than 5,000 students who died in poorly constructed schools. For “Snake Ceiling” (2009), backpacks in a range of sizes, representing children of various ages, are linked into a serpentine form. Ai began an online campaign to collect the name, birth year, gender and class of each of the children after he became frustrated with the government response to the quake. “Names of the Student Earthquake Victims Found by the Citizens’ Investigation” (2008–11) presents these facts in black and white. Running nearly three hours and 45 minutes, “Remembrance” (2010) is an audio recording in which each child’s name is spoken aloud. In this group of works, the artist asks fundamental questions not about the value of artworks and artifacts but about the worth of individual human lives.

Ai traveled to Sichuan to witness firsthand the quake’s aftermath. For “Straight” (2008–12), he collected 38 tons of twisted steel rebar from collapsed buildings, much of which was being sold for scrap, and had it straightened and then arranged into an orderly pile with a fissure at its center. Other new works added to the exhibition since its Mori debut include “Surveillance Camera” (2010), in which a piece of technology used to keep an eye on the artist is rendered in marble, both monumentalizing it and rendering it inert, and “He Xie” (2010– ), an installation of more than 3,000 porcelain river crabs. These creatures are significant because the words for “river crab,” “he xie,” are a homophone for the Chinese word for “harmonious” in the Chinese Communist Party slogan “the realization of a harmonious society.” The term “he xie” has become Internet slang used to refer obliquely to official online censorship.

In conjunction with the Hirshhorn’s presentations of Ai’s work, the Smithsonian’s Arthur M. Sackler Gallery will present “Perspectives: Ai Weiwei” until April 7, 2013.

“Ai Weiwei: According to What?” is organized by Kataoka at the Mori Art Museum and by the Hirshhorn. The exhibition is made possible with generous support from André Stockamp and Christopher Tsai, Tsai Capital Corporation; members of the Committee for the Artist’s Voice; the Holenia Trust Fund, in memory of Joseph H. Hirshhorn; and the Hirshhorn’s Board of Trustees. The Hirshhorn has also begun an online fundraising campaign through causes.com. Visit Help Bring Ai’s Work to the Hirshhorn.

To accompany the exhibition, the Hirshhorn, the Mori and Prestel will co-publish a full-color catalog, including updated essays by Kataoka and art historian Charles Merewether and a recent interview with the artist, conducted via email by Brougher. In addition to the hardcover trade edition to be distributed internationally, the catalog will be produced as a $5 magazine for sale at the exhibition venues, as well as an e-book, the Hirshhorn’s first. Major support for the catalog is provided by The Bui Gallery, Mary Boone Gallery, Haines Gallery, Lisson Gallery and Galerie Urs Meile, Beijing-Lucerne.

The Hirshhorn offers a range of interactive educational experiences designed to engage people of all interest levels in contemporary art. On Sunday, Oct. 7, at 5:30 p.m., in the Ring Auditorium, a panel discussion, including former U.S. National Security Advisor Zbigniew Brzezinski, who is currently with the Center for Strategic and International Studies and the School of Advanced International Studies at Johns Hopkins University; literary critic and theorist Gayatri Chakravorty Spivak, professor at Columbia University; and noted curator Roger M. Buergel, artistic director of Documenta 12 and Busan Biennale 2012, will examine Ai’s work in the context of art and social change (further details forthcoming). The ongoing Meet the Artist series brings a diverse group of artists and filmmakers to the museum to discuss their work. Documentarian Alison Klayman speaks about her film Ai Weiwei: Never Sorry Thursday, Nov. 8, at 7 p.m. Vito Acconci, whose multidisciplinary work spans poetry, performance, video, installation, architecture, and design, delivers a lecture on his own interpretation of Ai and his work Thursday, Nov. 15, at 7 p.m. Artists and other experts address “Ai Weiwei: According to What?” in depth in several Friday Gallery Talks; consult hirshhorn.si.edu for a complete schedule. The museum’s library of podcasts makes gallery walk-throughs and interviews with artists accessible internationally.

The Hirshhorn Museum and Sculpture Garden, the Smithsonian Institution’s museum of international modern and contemporary art, has nearly 12,000 paintings, sculptures, photographs, mixed-media installations, works on paper and new media works in its collection. The Hirshhorn presents varied exhibitions and offers an array of public programs that explore modern and contemporary art. Located at Independence Avenue and Seventh Street S.W., the museum is open daily from 10 a.m. to 5:30 p.m. (except Dec. 25). Admission to the galleries and special programs is free. For more information about exhibitions and events, please visit hirshhorn.si.edu. Follow the Hirshhorn on Facebook at facebook.com/hirshhorn and on Twitter at twitter.com/hirshhorn. To request accessibility services, please contact Kristy Maruca at marucak@si.edu or (202) 633-2796, preferably two weeks in advance.