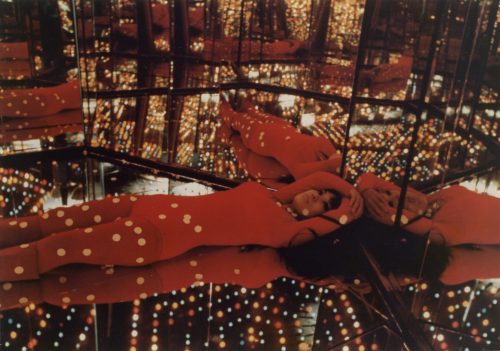 The Hirshhorn Museum and Sculpture Garden will present the “Kusama on Screen” film series, talks and family events in conjunction with the major exhibition “Yayoi Kusama: Infinity Mirrors” (Feb. 23–May 14). From rarely seen footage of Kusama’s early 1960s “happenings” to a full-length documentary of her life today, these programs introduce visitors to Kusama’s 65-year career as an artist and icon.

The Hirshhorn’s diverse range of year-round, free public programs invite today’s leading innovators in art, design, music and technology to explore ideas that shape 21st-century culture. All are held in the museum’s Ring Auditorium unless otherwise noted. Seating is limited and available on a first-come, first-served basis.

Join the museum for a cinematic exploration into the life and legacy of Kusama. Using experimental cinema, recordings of her New York happenings and documentary footage of her current life in Japan, this series looks at Kusama’s multifaceted career through her life and connection to performance and film.

Performance and the Body: Yayoi Kusama
Feb. 26 at 3 p.m.
Well respected for her provocative performances and public “happenings” in New York in the late 1960s, Kusama has often used her body and image as a key element in her work on and off camera. This series of experimental films illustrate the politically charged nature of her happenings and insights into her world view.

Watashi Daisuki (I Adore Myself) (2008)
Sunday, March 26; 3 p.m.
I Adore Myself follows the wildly charismatic Kusama during an 18-month period as she obsessively works on “Love Forever,” a series of 50 large drawings for a 2008 gallery opening in New York City. This film is presented in partnership with the Smithsonian’s Freer Gallery of Art and Arthur M. Sackler Gallery.

Expanded Cinema and the Black Gate Theater
Sunday, April 9; 3 p.m.
Taking a unique look into the experimental Black Gate Theater, where Kusama performed and staged happenings in New York City in the 1960s, this program will include screenings of Aldo Tambellini’s Black Zero and Otto Piene’s The Proliferation of the Sun, as well as never before shown documentary footage.

In Conversation: Kusama’s Path to Infinity

Thursday, March 9; 6:30 p.m.
For more than 60 years, Kusama has built a robust career out of her self-interest and obsessions. Her work has enjoyed a recent resurgence of interest through social media captures of her photogenic and captivating Infinity Mirror Rooms. Scholars and catalog contributors Midori Yamamura, Miwako Tezuka and Gloria Sutton come together to discuss the history and lasting legacy of the artist and her extensive practice.

Friday, April 14; 12:30 p.m.
Meet at the Information Desk
Curator of the exhibition Mika Yoshitake discusses Kusama’s obsession with polka dots and pumpkins for a special gallery talk on the Hirshhorn Plaza.

Family Day: From a Moment to Infinity

Saturday, April 30; 10 a.m.–2 p.m. museum-wide
The Hirshhorn and Smithsonian Gardens team up for a day of family friendly activities inspired by “Orchids: A Moment and Yayoi Kusama: Infinity Mirrors.”

Three events will be featured as part of the National Cherry Blossom Festival (March 17–April 20): two screenings in the “Kusama on Screen” series—Watashi Daisuki (I Adore Myself) Sunday, March 26, and Expanded Cinema and the Black Gate Theater Sunday, April 9—and a gallery talk led by curator Mika Yoshitake Friday, April 14.