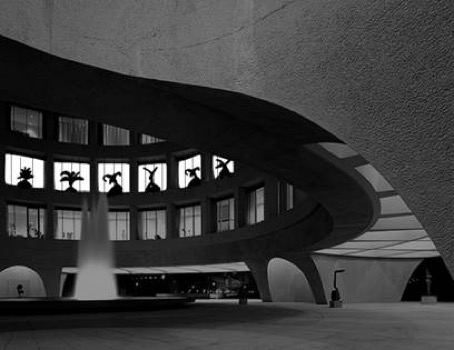 The Hirshhorn Museum and Sculpture Garden will partner with local arts organization Transformer to present “Shadow/Casters,” an after-hours performance art event on the Hirshhorn’s outdoor plaza Saturday, June 10, 7:30–11 p.m. Guests will be invited to explore the museum during special extended hours, enjoy a cash bar and music on the plaza, and take in four site-specific performances that creatively explore abundance, transition and community through contemporary storytelling and ritual.

“Shadow/Casters” will take audiences on a visual journey through culture, time and space with a variety of immersive performance styles, including dance and drumming. The evening culminates as the moon emerges, with a three-story tall performance projection that transforms the Hirshhorn’s iconic round building into a physical shadow theater and creates a spectacular display of light and shadow, designed to be experienced by the crowds gathered below.

Tickets are $18, and will be available online May 9. “Shadow/Casters” is presented in conjunction with D.C.’s annual Capital Pride festival, held June 8–11, and in partnership with Smithsonian GLOBE (Gay, Lesbian, Bisexual, and Transgender Employees).

The evening is curated by Transformer’s Executive and Artistic Director Victoria Reis.

Born and raised in the D.C. area, Jason Barnes mixed his background in music, theater, art, and fashion in New York and Paris to develop his Pussy Noir character, an androgynous entity that first became popular in nightclubs and later was featured in art galleries around the city. Barnes continues to refine his performance, inviting the audience to have a full sensory experience.

Alexandra "Rex" Delakaran is an interdisciplinary artist from San Francisco, who uses movement and endurance to tell stories. She has performed and exhibited her work in cities around the country, including D.C., New York, Pittsburgh and San Francisco. While working in arts administration, she continues to perform, make sculpture at Red Dirt Studios and pursue curatorial projects.

Questioning and rebelling against institutional ideas of race, gender and queerness, Kunj Patel uses ritual performance and structure to explore the notion of no-identity versus new-identity. He received his bachelor’s degree in anthropology and studio art from the University of Maryland, and has performed at Grace Exhibition Space in New York, EMP Collective in Maryland and the Smithsonian’s National Portrait Gallery.

Hoesy Corona is a multidisciplinary artist and the founding co-director of Labbodies, a visual arts organization that creates opportunities for artists working in the arena of performance art. Corona’s unapologetically colorful, sculptural and performance-based works have appeared at The Baltimore Museum of Art, The Walters Art Museum, The Queens Museum, Visarts, Transformer DC, Glass House Project, Kern Gallery, Haggerty Museum, The Peale Museum, Panoply Performance Laboratory and The Brooklyn International Performance Art Festival, among others. Corona is the recipient of a 2017 Andy Warhol Foundation Grit Fund Grant administered by The Contemporary.

Transformer is a Washington, D.C.-based, artist-centered, non-profit visual arts organization, providing a consistent, supportive and professional platform for emerging artists to explore and present experimental artistic concepts, build audiences for their work, and advance their careers. A catalyst and advocate for contemporary artists and emergent expression in the visual arts, Transformer connects and promotes emerging visual artists within regional, national and international contexts through innovative exhibition and program partnerships. For more information, visit transformerdc.org.

“Shadow/Caster” is supported by The D.C. Commission on the Arts & Humanities/NEA, The Andy Warhol Foundation for the Visual Arts, and the Visionary Friends of Transformer.