Future Evidence for Extraterrestrial Life Might Come from Dying Stars 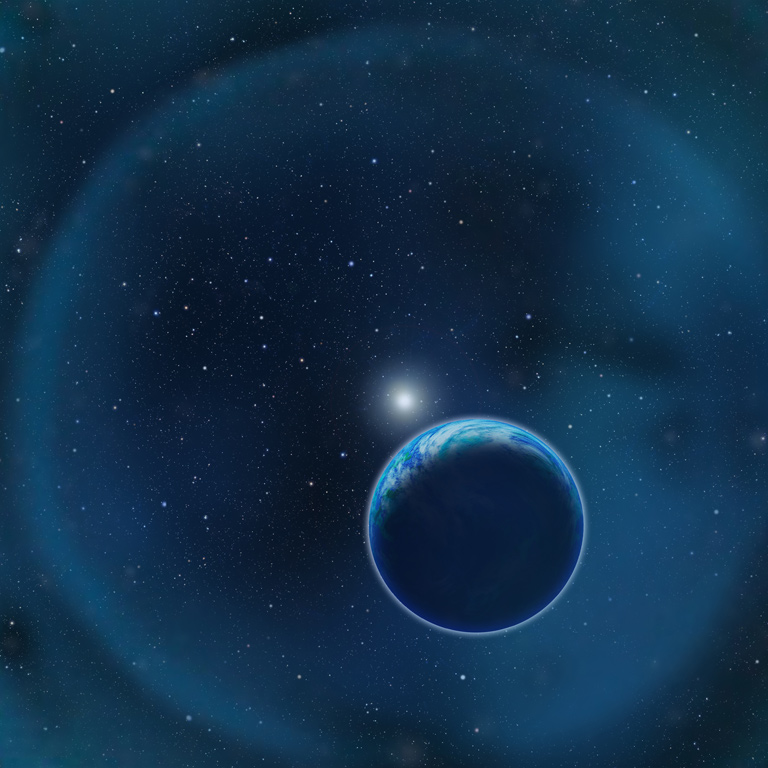 Even dying stars could host planets with life—and if such life exists, we might be able to detect it within the next decade. This encouraging result comes from a new theoretical study of Earth-like planets orbiting white dwarf stars. Researchers found that we could detect oxygen in the atmosphere of a white dwarf’s planet much more easily than for an Earth-like planet orbiting a sun-like star.

“In the quest for extraterrestrial biological signatures, the first stars we study should be white dwarfs,” said Avi Loeb, theorist at the Harvard-Smithsonian Center for Astrophysics (CfA) and director of the Institute for Theory and Computation.

When a star like the sun dies, it puffs off its outer layers, leaving behind a hot core called a white dwarf. A typical white dwarf is about the size of Earth. It slowly cools and fades over time, but it can retain heat long enough to warm a nearby world for billions of years.

Since a white dwarf is much smaller and fainter than the sun, a planet would have to be much closer in to be habitable with liquid water on its surface. A habitable planet would circle the white dwarf once every 10 hours at a distance of about a million miles.

Before a star becomes a white dwarf it swells into a red giant, engulfing and destroying any nearby planets. Therefore, a planet would have to arrive in the habitable zone after the star evolved into a white dwarf. A planet could form from leftover dust and gas (making it a second-generation world), or migrate inward from a larger distance.

If planets exist in the habitable zones of white dwarfs, we would need to find them before we could study them. The abundance of heavy elements on the surface of white dwarfs suggests that a significant fraction of them have rocky planets. Loeb and his colleague Dan Maoz (Tel Aviv University) estimate that a survey of the 500 closest white dwarfs could spot one or more habitable Earths.

The best method for finding such planets is a transit search—looking for a star that dims as an orbiting planet crosses in front of it. Since a white dwarf is about the same size as Earth, an Earth-sized planet would block a large fraction of its light and create an obvious signal.

More importantly, we can only study the atmospheres of transiting planets. When the white dwarf’s light shines through the ring of air that surrounds the planet’s silhouetted disk, the atmosphere absorbs some starlight. This leaves chemical fingerprints showing whether that air contains water vapor, or even signatures of life, such as oxygen.

Astronomers are particularly interested in finding oxygen because the oxygen in the Earth’s atmosphere is continuously replenished, through photosynthesis, by plant life. Were all life to cease on Earth, our atmosphere would quickly become devoid of oxygen, which would dissolve in the oceans and oxidize the surface. Thus, the presence of large quantities of oxygen in the atmosphere of a distant planet would signal the likely presence of life there.

NASA’s James Webb Space Telescope (JWST), scheduled for launch by the end of this decade, promises to sniff out the gases of these alien worlds. Loeb and Maoz created a synthetic spectrum, replicating what JWST would see if it examined a habitable planet orbiting a white dwarf. They found that both oxygen and water vapor would be detectable with only a few hours of total observation time.

“JWST offers the best hope of finding an inhabited planet in the near future,” said Maoz.

Recent research by CfA astronomers Courtney Dressing and David Charbonneau showed that the closest habitable planet is likely to orbit a red dwarf star (a cool, low-mass star undergoing nuclear fusion). Since a red dwarf, although smaller and fainter than the sun, is much larger and brighter than a white dwarf, its glare would overwhelm the faint signal from an orbiting planet’s atmosphere. JWST would have to observe hundreds of hours of transits to have any hope of analyzing the atmosphere’s composition.

Their paper has been accepted for publication in the Monthly Notices of the Royal Astronomical Society and is available online.