Festivals, Performances, Screenings and Talks at the National Museum of the American Indian To Celebrate Native American Heritage Month 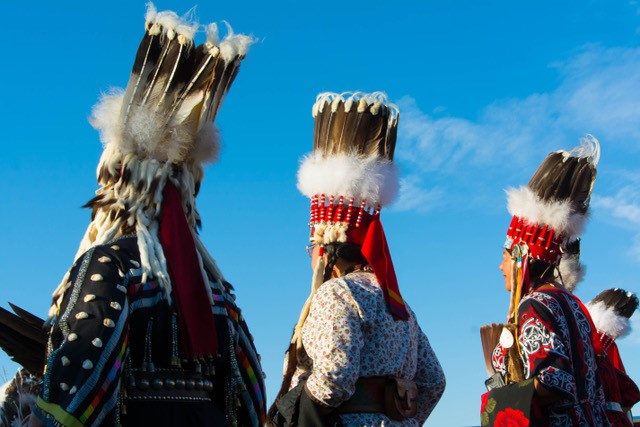 November is Native American Heritage Month. There are 6.6 million Native American and Alaska Native people living in the United States, as well as millions of other Indigenous people living throughout the Western Hemisphere—all with unique traditions, languages, values and histories. Visitors can celebrate the diversity and contributions of these Native cultures at the Smithsonian’s National Museum of the American Indian with a variety of free public events in Washington, D.C., and New York City. Programs include festivals, performances, talks and family activities.

Visitors to National Museum of the American Indian’s George Gustav Heye Center in New York City will be able to enjoy the new exhibition “Stretching the Canvas: Eight Decades of Native Painting,” opening Nov. 16. The exhibition strives to expand traditional understandings of American Indian Art and present viewers with paintings that change the way authenticity of Native art is perceived.

Visitors can enjoy the music and dance interpretations of Pamyua as the museum celebrates 15 years of programming outstanding Native (and non-Native) thinkers and performers in its Rasmuson Theater. Brothers Stephen and Phillip Blanchett, of Yup’ik and African American descent, formed Pamyua in 1995, with traditional Yup’ik dancer and culture-bearer Ossie Kairaiuak joining them in 1996. Revered across Europe and North America, Pamyua brings a unique style and contemporary twist to Yup’ik drum-dance songs. Experience the group’s special cultural harmony and learn more about Inuit culture through this celebration of one of the great cultural arts venues on the National Mall.

Brothers Stephen and Phillip Blanchett (Yup’ik and African American descent) formed Pamyua in 1995 with traditional Yup’ik dancer and culture-bearer Ossie Kairaiuak joining a year later. The group has shared its culture and unique blend of traditional songs with contemporary style across North America and Europe.

The Taíno are one of the Indigenous peoples of the Caribbean. Visitors can learn more about Taíno history, culture and worldviews from museum specialist Jorge Estévez (Taíno). Through cultural materials and live demonstrations, Estévez facilitates discussion of the persistence and depth of Taíno lifeways and living traditions.

Pocahontas lived and died not only in the maelstrom of the English–Powhatan encounter in the early 17th century, but at a singular moment in world history. She participated in the newly emerging Atlantic world. Her legacy helped shape Europeans’ conception of that world and the United States’ conception of itself for centuries. Why and how so? This presentation by National Museum of the American Indian Curator Cécile R. Ganteaume explores what is known about Pocahontas and her early impact on European and American thought.

Join Perry Ground for an engaging and informative workshop and storytelling session about the history of this very misunderstood holiday. Based on the only primary source documents that chronicle the “First Thanksgiving” and using a quiz-style format, visitors will learn accurate and culturally appropriate information about the English settlers at Plymouth and the Wampanoag, the Native people who inhabited that area, and learn about how this story became the holiday is known today.

The National Museum of the American Indian celebrates Día de los Muertos (Day of the Dead), with performances and family activities throughout the weekend. Artist Lilia Ramirez (Nahua) works with visitors of all ages to create an interactive mural featuring La Catrina, the elegant skeleton drawn by Mexican illustrator Jose Guadalupe Posada. People will find La Catrina throughout the festival, perhaps lounging on an ofrenda (altar), dancing with jaguars and old men, grinning from a magnet activity, waiting to be dressed in marigolds, emerging from a sawdust carpet, having her bones connected into a puppet or posing with visitors for photos.

The festival will feature a traditional ofrenda created by National Heritage Fellow Ofelia Esparza (Purépecha) and her daughter Rosanna Esparza Ahrens, who have collaborated in creating altars since 1999. Esparza and Smithsonian folklorist Cynthia Vidaurri will present talks on Day of the Dead traditions in Mexico and the United States. Grupo los Tecuanes performs music and dances throughout both days. Visitors can honor their loved ones by making paper marigolds, the bright flowers that decorate family ofrendas set up for the Day of the Dead. The museum’s Potomac Atrium and imagiNATIONS Activity Center will be devoted to presentations and hands-on activities for young and not-so-young festivalgoers.

Visitors can participate in the museum’s annual celebration with performances by the Aztec group Cetiliztli Nauhcampa, a community ofrenda (altar) and hands-on activities for all ages.

Visitors can learn about the Blackfeet Nation and the many aspects unique to Blackfeet culture through this two-day festival. The Blackfeet Reservation, located in northwestern Montana along the eastern slopes of the Rocky Mountains, is home to one of the 10 largest tribes in the United States, with more than 17,000 enrolled members. Throughout the festival weekend, Blackfeet artists, performers, historians and culture bearers will share demonstrations and performances. Highlights will include seasonally appropriate dances and stories, and demonstrations of making traditional regalia from the hides of buffalo, deer, elk and antelope. During the celebration, visitors can see traditional and contemporary artistic creations, including beadwork, handcrafted jewelry, quillwork, pottery, horsehair work, moccasins, carvings and baskets.

The museum’s unique family celebration of Native American Heritage Day showcases Native culture through interactive dancing, games, storytelling, hands-on activities and make-and-takes, as well as music and dance presentations. The program features the Dineh Tah Navajo Dancers throughout the day. Join the museum in recognizing the many contributions of Native Americans to all aspects of life in the United States.

In partnership with Native peoples and their allies, the National Museum of the American Indian fosters a richer shared human experience through a more informed understanding of Native peoples. The museum strives toward equity and social justice for the Native peoples of the Western Hemisphere through education, inspiration and empowerment. It features exhibitions and programs in New York City and the National Mall in Washington, D.C. For additional information, including hours and directions, visit AmericanIndian.si.edu. Follow the museum via social media on Facebook, Twitter and Instagram.