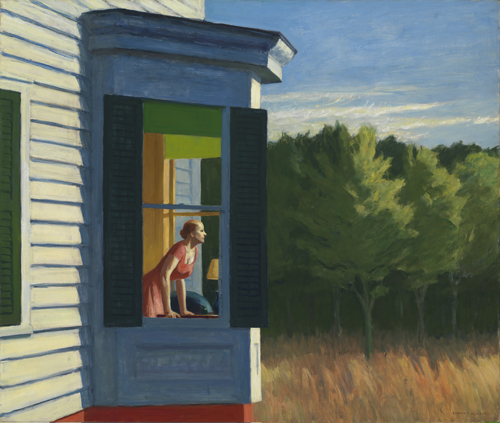 “Modern American Realism: The Sara Roby Foundation Collection” presents some of the most treasured artworks from the Smithsonian American Art Museum’s permanent collection, including works by Will Barnet, Isabel Bishop, Paul Cadmus, Arthur Dove, Nancy Grossman, Edward Hopper, Wolf Kahn, Yasuo Kuniyoshi, Jacob Lawrence, Reginald Marsh, Ben Shahn and Honoré Sharrer, among others. The exhibition includes 70 paintings and sculpture from the 1910s to the 1980s that encompass the range of what can broadly be called modern realism, from socio-political to psychological, from satirical to surrealist. The artworks on display were selected by Virginia Mecklenburg, chief curator at the museum. The exhibition will be on view from Feb. 28 through Aug. 17.

Sara Roby (1907-1986) believed that the most effective way to encourage the visual arts in the United States was to acquire the works of living artists and exhibit them to the public. The Sara Roby Foundation began collecting American art in the mid-1950s, and during the next 30 years assembled a premier group of paintings and sculpture by the country’s leading figurative artists. In 1959, an exhibition of the Foundation’s collection opened at the Whitney Museum of American Art in New York. It was the beginning of a 25-year exhibition program that circulated artworks from the foundation’s collection to museums throughout the country.

“Some of the most beloved works in the Smithsonian American Art Museum’s collection—such as ‘Cape Cod Morning’ by Edward Hopper and ‘Night in Bologna’ by Paul Cadmus—are part of this exhibition, which is a testament to the enduring relevance of the figurative tradition in American art,” said Mecklenburg.

A painter herself, Roby sought out art broadly defined as realist and artists concerned with principles of form and design that she had learned as an art student, first in Pennsylvania Academy of the Fine Arts in Philadelphia and later with Reginald Marsh and Kenneth Hayes Miller at the Art Students League in New York City. The resulting collection captures both the optimism and the apprehension of the years following World War II. Many of the works are poignantly human, such as “Dowager in a Wheelchair” (1952) by Philip Evergood, while others are whimsical, like “Gertrude and George” (1979) by Richard Merkin. Still others, by artists such as Roy De Forest and Robert Vickrey, challenge us to decipher meanings imbedded in complex, sometimes enigmatic scenes.

Roby refused to be bound by current trends when she began collecting in the 1950s. She championed realism at a time when critics celebrated abstract expressionism and promoted “action painting” in works that bore little resemblance to the natural world. Roby also was unwilling to be constrained by her own collecting criteria. In addition to paintings by Hopper, Cadmus and their contemporaries, the Foundation purchased abstract work by artists, including Stuart Davis, Louise Nevelson and Mark Tobey. Roby and her advisors recognized that modern life allowed for many kinds of realism.

The Sara Roby Foundation has long supported collection and research initiatives at the Smithsonian American Art Museum. In 1986, the Sara Roby Foundation gave to the Smithsonian American Art Museum a transformative gift of 175 paintings, sculpture and works on paper. In 1996, the Sara Roby Fellowship in 20th-Century American Realism was established at the museum. Since then, the museum has hosted 20 predoctoral, postdoctoral and senior fellows as well as two object conservation fellows. Last year, the Foundation made a gift to the museum to establish the Sara Roby Endowment. The endowment supports the museum’s programmatic initiatives related to realist or figurative art, including curatorial assistance, exhibitions support, acquisitions, educational and public programs, and publications.

Several free public programs have been planned to complement the exhibition. Art historian William Kloss will discuss the range and styles of American realism represented in the Roby Collection in a lecture titled “RobyReal” Friday, March 7, at 6 p.m. in the museum’s McEvoy Auditorium. Gallery talks will take place Wednesday, March 19, at noon when museum conservators talk about techniques used to treat and preserve selected artworks on display in the exhibition, and Mecklenburg will conduct a tour of the exhibition Wednesday, May 7, at 6 p.m. The 21st Century Consort performance Saturday, April 26, at 5 p.m. features music inspired by the exhibition. Additional information about programs is available online at americanart.si.edu/calendar.