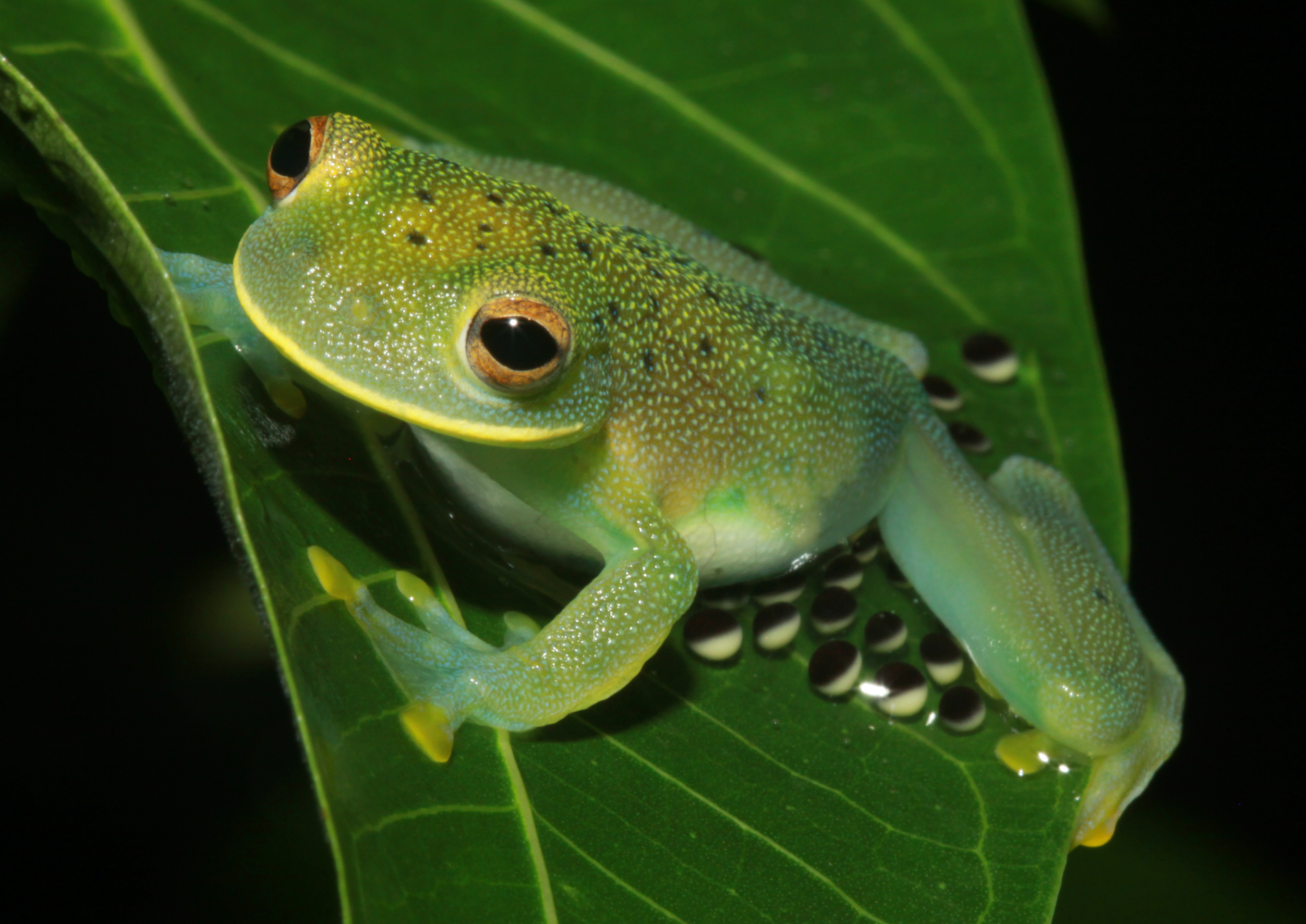 Glassfrogs may be somewhat see-through, but they have still managed to a hide an important secret—they are dedicated mothers and fathers that invest time in brooding their eggs. Smithsonian scientists documented previously unknown parental-care behavior using detailed observations of 40 species of glassfrogs in Central and South America. Their discovery rewrites assumptions about how caregiving evolved in this family of translucent, tree-dwelling frogs.

“These are relatively well-studied, charismatic frogs, yet we were fundamentally wrong about their reproductive behavior,” said Karen Warkentin, associate scientist at the Smithsonian Tropical Research Institute and professor at Boston University. That is because the frogs mate during the night, laying their eggs from leaves that dangle over running water. Warkentin’s doctoral student, Jesse Delia, and research partner Laura Bravo-Valencia of the University of Los Andes, Colombia, had to adopt nighttime schedules to observe what the frogs were doing.

“Because Jesse and Laura were spending all night on the streams, they saw things that nobody had seen before,” Warkentin said.

Crucially, Delia and Bravo-Valencia observed that female frogs will sit upon their eggs for up to five hours after laying them. The frogs’ translucent bellies absorb water from dew-covered leaves, which they then use to hydrate the jelly-coated eggs. Swelling up to four times its thickness, the jelly protects the developing embryos from egg predators and fungal infections.

Previously, only males of some species of glassfrogs had been observed brooding eggs, leading researchers to assume that parental care was rare in the glassfrog family. But in a new study published in the Journal of Evolutionary Biology, Delia and his collaborators found that every species they observed cared for its eggs. In most species, mothers tended to their eggs in the immediate hours after laying them. In fewer species, fathers cared for eggs. For 13 of the species, they monitored parental behavior from egg laying to tadpole hatching every night for weeks, observing how fathers cared for much longer periods than did mothers, continuing to brood their clutches even after the tadpoles started hatching.

Delia and Bravo-Valencia spent six rainy seasons at 22 streamside sites in Mexico, Panama, Colombia, Ecuador and Peru to learn how the frogs looked after their young. They trekked up and down streams in warm lowland forests as well as steep mountain streams in the Andes where, Delia notes, “In many sites there are cascades of freezing cold water.”

Their hard work paid off, because their field data helped make sense of the evolution of parental behavior in glassfrogs. Reasoning that first-night brooding by mothers was likely an ancestral trait common to glassfrogs, the researchers demonstrated that it was much more likely that male brooding evolved out of this behavior, rather than from an ancestor with no parental care.

“It seems that fathers not only took over the job when mothers were already doing it, but they also greatly elaborated the amount of care,” Warkentin said.

Apart from their field observations, experimental work in Panama on two species of glassfrogs revealed that brooding greatly increases the embryos’ chances of survival. Eggs whose mothers were removed before first-night brooding did not have swollen jelly coats, making them much easier for predators like katydids to consume. And mothers were dedicated to their task—they would resist pokes and pinches and even being pushed off their egg clutches by the researchers, climbing back onto the eggs to continue their work.

“Glassfrogs are but one small branch on the tree of life,” said Delia of their new observations. “But the way we had underestimated the diversity of parental behavior stresses the importance of getting out to the field and watching animals behave.”

Lead funding for this study came from the Smithsonian Tropical Research Institute, the Fulbright Scholar Program and the National Science Foundation.