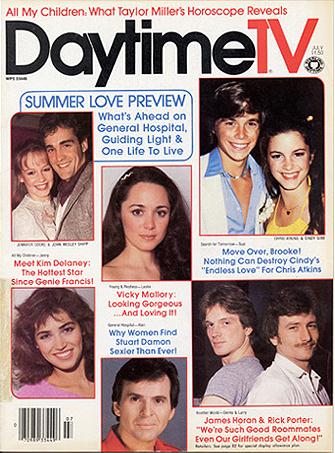 The Smithsonian’s National Museum of American History today adds artifacts that reflect the contributions of daytime television programming to the national entertainment collection in a special ceremony to mark a new partnership with the National Academy of Television Arts and Sciences. The donations—from All My Children actress Susan Lucci, Jeopardy! host Alex Trebek and Barney creators Kathy and Phil Parker—represent three of the primary Daytime Entertainment Emmy categories—daytime dramas, game shows and children’s programming.

The objects range from show scripts and original art to set props and other memorabilia, including a pink gown and shoes worn by Lucci when she appeared on a national magazine cover after winning her 1999 Daytime Emmy, a 1984 Jeopardy! script with handwritten notes by Trebek and a script from the first video to be released in the Barney & the Backyard Gang series along with a plush toy of the purple dinosaur. Today’s ceremony officially launches a three-year collecting initiative by the museum in partnership with NATAS to help the museum expand its capacity to tell the story of daytime television and the Daytime Emmys.

“Since the advent of television in the 1940s, the medium has changed to meet the interests of viewers and their daily lives,” said John Gray, director of the museum. “As we reflect on what it means to be an American, we want to expand our collections to illustrate the influence of daytime television on American culture.”

“We are excited at the prospect of working with the Smithsonian to tell the story of daytime television and its impact on popular culture in America,” said Malachy G. Wienges, chairman of NATAS. “The 40th anniversary of the Daytime Awards show this June 16 is an ideal venue to showcase the partnership.”

The museum’s television collections contain costumes, scripts, props and set pieces, including Archie Bunker’s chair from All in the Family, marionettes from The Howdy Doody Show, the puffy shirt from Seinfeld and Denis Leary’s firefighter costume from Rescue Me. An exhibition exploring American culture is currently in development and will draw on the museum’s television, theater, music, sports and entertainment collections. The exhibition is scheduled to open in late 2016.

About the National Academy of Television Arts and Sciences

NATAS is a professional service organization dedicated to the advancement of the arts and sciences of television and the promotion of creative leadership for artistic, educational and technical achievements within the television industry. NATAS recognizes excellence in television with the Emmy Award. For more information, visit www.emmyonline.tv.

Through incomparable collections, rigorous research and dynamic public outreach, the National Museum of American History explores the infinite richness and complexity of American history. The museum helps people understand the past in order to make sense of the present and shape a more humane future. It is currently renovating its west exhibition wing, developing galleries on business, democracy and culture. For more information, visit http://americanhistory.si.edu. The museum is located at 14th Street and Constitution Avenue N.W., and is open daily from 10 a.m. to 5:30 p.m. (closed Dec. 25). Admission is free. For Smithsonian information, the public may call (202) 633-1000.