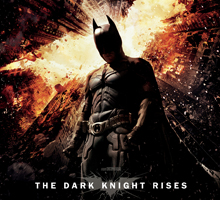 The Dark Knight Rises is the epic conclusion to filmmaker Christopher Nolan’s Dark Knight trilogy. Eight years after Batman took the fall for Two Face’s crimes, a new terrorist leader, Bane, overwhelms Gotham’s finest, and the Dark Knight resurfaces to protect a city that has branded him an enemy.

The Smithsonian IMAX Theaters are the only place in the Washington area to see The Dark Knight Rises as director Christopher Nolan intended. In filming, Nolan used IMAX cameras more extensively than he did on The Dark Knight, which had marked the first time ever that a major feature film was partially shot with IMAX cameras. The Dark Knight Rises contains more than an hour of IMAX footage, which will fill the Smithsonian’s six-story screens—an experience that cannot be achieved in a standard movie theater. The PG-13 rated film runs 2 hours and 45 minutes. It was directed by Christopher Nolan and features Christian Bale, Anne Hathaway, Tom Hardy, Marion Cotillard and Joseph Gordon-Levitt. The film will be distributed worldwide by Warner Bros. Pictures, a Warner Bros. Entertainment Co.

Tickets are on sale now for select shows at the Lockheed, Airbus and Johnson IMAX Theaters. The public may visit any Smithsonian Theaters box office, call toll-free (866) 868-7774 or visit www.si.edu/IMAX for information or to purchase tickets.

The Lockheed Martin IMAX Theater is located on the first floor of the National Air and Space Museum at Sixth Street and Independence Avenue S.W.

The Airbus IMAX Theater is located on the main floor of the Steven F. Udvar-Hazy Center at 14390 Air and Space Museum Parkway in Chantilly, Va. The theater’s 75-by-62-foot screen is the largest in northern Virginia.

The Johnson IMAX Theater is located on the first floor of the National Museum of Natural History at 10th Street and Constitution Avenue N.W. The theater’s 90-by-60-foot screen is the biggest flat movie screen on the East Coast.