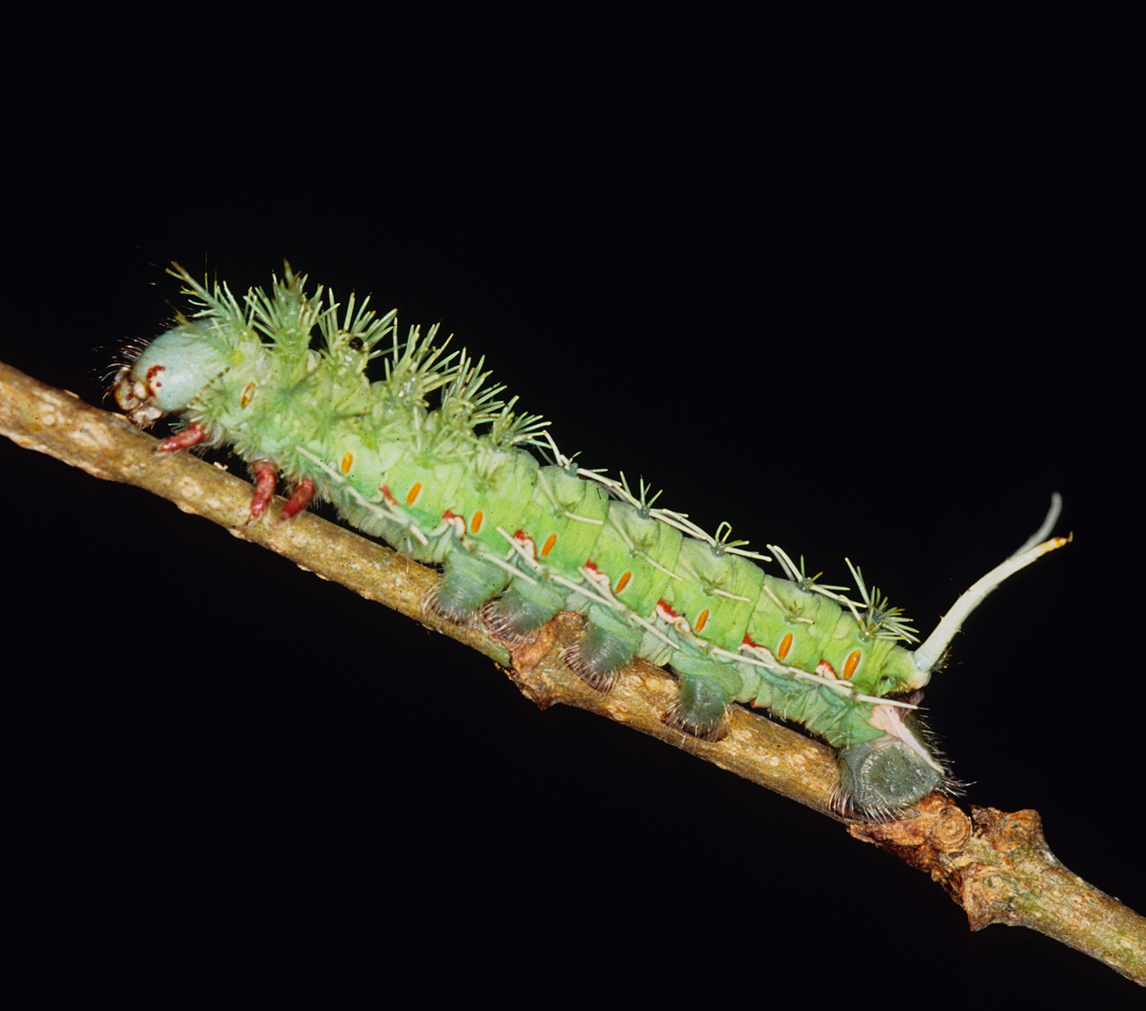 Scientists at the Smithsonian Tropical Research Institute (STRI) in Panama compared the diets of two caterpillar species, expecting the one that exclusively consumed plants containing toxic chemicals would more easily incorporate toxins into its body than the one with a broad diet. They found the opposite. The new finding, published in the Journal of Chemical Ecology, flies in the face of a long-held theory that specialist insects are better adapted to use toxic plant chemicals than non-specialists.

The tropical plant Vismia baccifera protects itself by producing a number of repellent chemicals, including three compounds that are toxic to living cells. Few plant-eating insects can stomach such a cocktail, but for those that can, the advantages are clear—less competition for a meal, and a chemical toolkit they can use in their own defense.

Skipper butterfly, Pyrrhopyge thericles, caterpillars only eat plants in the genus Vismia. The caterpillars of a large moth, Periphoba arcaei, have a much broader diet, including Vismia plants and many others. Brightly colored caterpillars, one with flamboyant stripes, and the other blue-green with bristles, teach predators to associate their striking looks with toxicity—a defensive warning system known as aposematism.

The researchers analyzed several life stages of the two caterpillar species for the presence and concentration of plant toxins called vismiones. While two vismione compounds are found at a ratio of 1:6 in the plants, in the specialist butterfly caterpillars the compounds were barely detectable, and at roughly equal ratios. Meanwhile, the generalist moth caterpillars contained significant quantities of the rarer of the two compounds, suggesting that they were able to actively store this plant chemical in their own bodies. Both caterpillars’ fecal matter revealed a 1:2 ratio of the plant compounds, indicating that their bodies might uptake compounds selectively or convert molecules of one type over the other.

“We know very little about just how each plant-eating insect handles these chemicals—how they store them or eliminate them,” said STRI staff scientist and study coauthor Annette Aiello. Some insects might isolate the compounds so they do not cause them harm, while others might convert the molecules into forms that are harder for scientists to detect. Insects that process harmful toxins without damaging their own cells have a survival advantage. For a generalist species, said Aiello, “the ability to sequester toxic compounds might be an early evolutionary breakthrough,” the first step along the pathway to becoming a toxic plant specialist.

Previous work suggests that the presence of plant-eating insects sporting bright warning colors may signal plants containing potentially useful chemicals. And while specialist insects share an obvious history with their host plants, the new study suggests that generalist insects also may play an important role in the chemical arms race that drives plant-insect coevolution. “The study of insects with generalist diets can sometimes yield results that are just as rewarding as the study of specialists,” Capson said.

This study was conducted through STRI and McGill University’s collaborative Neotropical Environment Option program. The work was supported in part by Panama’s International Cooperative Biodiversity Groups program. The authors’ present affiliations include STRI, McGill, the Centro de Investigaciones Farmacognósticas de la Flora Panameña, University of the Western Cape and the National Bureau of Science, Technology and Innovation of Panama.

STRI, headquartered in Panama City, Panama, is a unit of the Smithsonian Institution. The institute furthers the understanding of tropical nature and its importance to human welfare, trains students to conduct research in the tropics and promotes conservation by increasing public awareness of the beauty and importance of tropical ecosystems. Visit our website here.