Both Archaeological and Genetic Evidence Is Necessary to Reveal Process of Plant and Animal Domestication
April 17, 2014
News Release 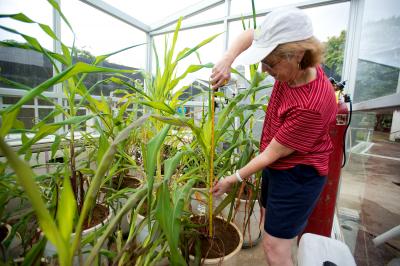 Suddenly there was a word for chili peppers. Information about archaeological remains of ancient chili peppers in Mexico along with a study of the appearance of words for chili peppers in ancient dialects helped researchers to understand where jalapeños were domesticated and highlight the value of multi-proxy data analysis. Their results are from one (Kraig Kraft et al.) of nine papers presented in a special feature issue of the Proceedings of the National Academy of Sciences on plant and animal domestication edited by Dolores Piperno, staff scientist emerita at the Smithsonian Tropical Research Institute and curator of South American Archaeology at the Smithsonian’s National Museum of Natural History, and Greger Larson of Durham University in England.

Humans evolved about 200,000 years ago and spent 95 percent of human history as hunter-gatherers. Why did agriculture begin to emerge in human cultures about 12,000 years ago? Was it the result of a prime mover: divine inspiration, environmental change or population growth? What cultural and natural processes led to the domesticated species that supply most of the world’s foods today? The complexity of these questions requires multidisciplinary research. Bringing together scientists from a wide range of disciplines involved in domestication studies, Larson and Piperno organized a meeting funded and hosted by the National Evolutionary Synthesis Centre in 2011. The Proceedings of the National Academy of Sciences special feature is a result of the meeting.

“Having archaeologists and geneticists talking to and collaborating with each other and a suite of new techniques to play with is radically changing the way we think about domestication,” said Piperno.

The overview paper (Larson and Piperno et al.) that introduces the special issue emphasizes the need to use both archaeological and genetic evidence to sort out the unique processes of domestication that occurred at about the same time around the world from “predomestication cultivation”—plants cultivated over many generations that still have features of wild plants—and the presence of animals in association with humans to truly domesticated organisms that exhibit very specific traits like large seeds, bigger flowers, reduction in physical and chemical defenses in plants and altered coat color, floppy ears and baby faces (facial neotony) in animals.

Papers in the special feature cover both older and more recent issues in the study of domestication. New genetic screening techniques and the ability to sequence DNA from ancient specimens led Larson and his group at Durham University (Linus Flink et al.) to caution that using modern genetic data alone to guess which genes may have been involved in domestication origins may be misleading. They compared DNA from 80 chickens excavated from 12 different archaeological sites in Europe dated from 280 B.C. to the 18th century to modern chicken DNA. Sequencing revealed that yellow-skinned chickens were probably not common early in the domestication process. Their work suggests that yellow skin became the norm only about 500 years ago, probably as a result of global commerce.

The authors of the overview paper (Larson and Piperno et al.) expect more exciting results as researchers from around the world and from many disciplines work together to nail down the environmental and ecological contexts of domestication and the shift from hunting and gathering to cultivation and herding. As they say in the paper abstract: “It is difficult to overstate the cultural and biological impacts that the domestication of plants and animals has had on our species. … the next decade will yield even more substantial insights not only into how domestication took place, but also when and where it did, and where and why it did not.”