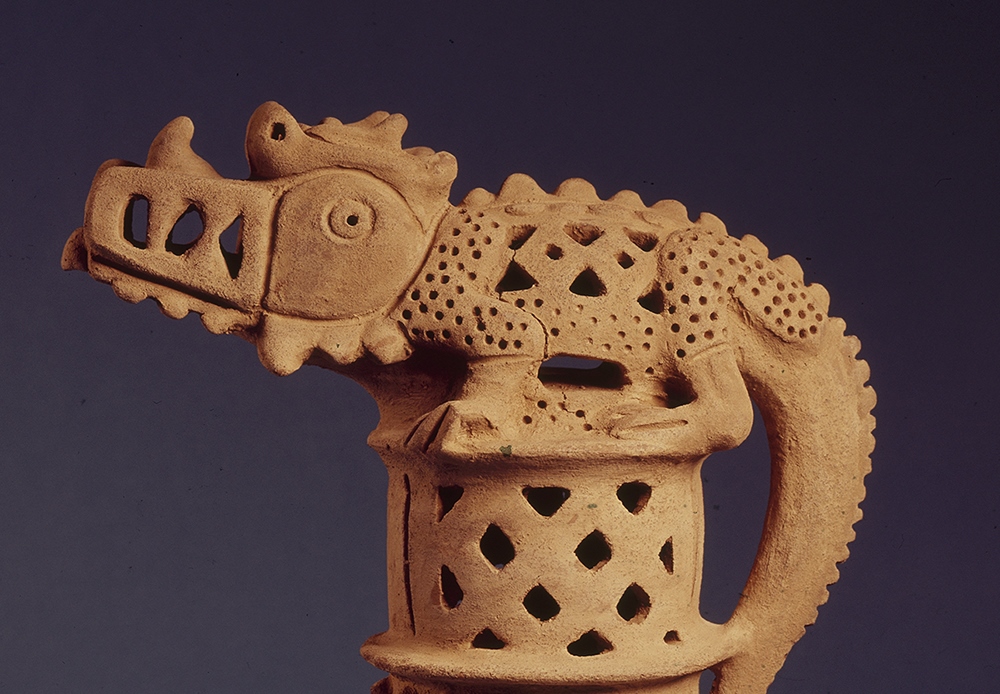 “Cerámica de los Ancestros” provides intimate access to select pieces from one of the world’s largest and rarely seen collections of nearly 12,000 ancient ceramic objects from the Americas. Over a two-year period of research, 155 pieces were chosen to illuminate the intricacies of ancient Central America’s first peoples and the societies they developed. Dating as far back as 1000 B.C., the ceramics these diverse communities left behind over the millennia, combined with recent archaeological discoveries, help tell the stories of their ancient cultures and innumerable achievements. The exhibition examines seven regions (Ulúa River, Maya, Lempa River, Greater Nicoya, Central Caribbean, Greater Chiriquí and Greater Coclé) representing distinct Central American cultural areas that are today part of Belize, Costa Rica, El Salvador, Guatemala, Honduras, Nicaragua and Panama.

The exhibition represents a pioneering effort to promote a better understanding of the early lives of Central America’s Native peoples. For thousands of years, Central America has been home to complex civilizations, each with unique, sophisticated ways of life, value systems and arts. In the Washington, D.C., area, these histories have engaged new Latino audiences, especially los centroamericanos, who consider these civilizations as part of their national and cultural heritage.

“These objects are accounts of power and progress, spirituality and the divine, love and loss—stories of massive empires and the everyday lives of those who built them—sealed forever within a superb collection of ancient ceramics,” said Kevin Gover (Pawnee), director of the National Museum of the American Indian. “Throughout the past two years we have showcased them in our first bilingual exhibition, which has brought them to a broader and more diverse audience. We are pleased to now offer this experience at our New York museum.”

“We are excited that this exhibition is traveling to New York City after almost two years in D.C.,” said Eduardo Díaz, director of the Smithsonian Latino Center. “Residents and visitors to the city will have a unique opportunity to see a part of one of the world’s most expansive pre-Colombian ceramics collections. We are happy to work with our partner, the National Museum of the American Indian, to share the cultural patrimony of Central America with a global audience and to strengthen ties with the Latino community in the New York area.”

The exhibition’s initial debut was built upon more than two years of research in the museum’s Central American ceramics collections sponsored by the Smithsonian Latino Center. Curator Ann McMullen and guest curator Alexander Villa Benitez of George Mason University identified key regional objects from the collection and augmented this selection with significant examples of work in gold, jade, copper, marble, shell and stone. Together, these objects span a period of more than 2,000 years and illustrate the richness, complexity and dynamic qualities of ancient Central American civilizations that were connected to peoples in South America, Mesoamerica and the Caribbean through social and trade networks that shared knowledge, technology, artworks and systems of status and political organization.

The exhibition is accompanied by the landmark publication, Revealing Ancestral Central America, edited by Rosemary A. Joyce, available for free digitally. In addition, an interactive website includes 3-D images of select objects, along with a bilingual children’s activity book and family guide. A full schedule of educational and public programs will include hands-on demonstrations, films and extended programming throughout the run of the exhibition.

The National Museum of the American Indian is located at One Bowling Green in New York City, across from Battery Park. The museum is free and open every day from 10 a.m. to 5 p.m., and on Thursdays until 8 p.m. (closed Dec. 25). Call (212) 514-3700 for general information and (212) 514-3888 for a recording about the museum’s public programs. By subway, the museum may be reached by the 1 to South Ferry, the 4 or 5 to Bowling Green or the R or W to Whitehall Street. The museum’s website is www.AmericanIndian.si.edu.