Biggest Snake Ever to be Displayed at Smithsonian 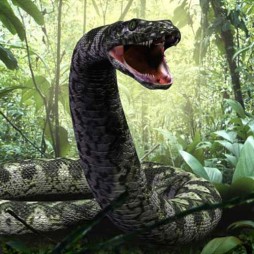 Slithering in at 48 feet long and weighing an estimated one-and-a-half tons, a realistic replica of the world’s largest snake is on exhibit at the Smithsonian’s National Museum of Natural History until Jan. 6, 2013. Sixty million years ago, in the era after the mass extinction of the dinosaurs, scientists believe that a colossal snake related to modern boa constrictors thrived in a hot tropical climate.

The exhibition includes the snake replica and two vertebra casts made from the original fossils: a 17-foot-long modern green anaconda and the vertebra from Titanoboa, as the giant snake is called. Videos tell the story of this amazing scientific discovery with scenes from the Smithsonian Channel’s two-hour special, Titanoboa: Monster Snake, which premieres on the Channel Sunday, April 1, at 8 p.m. EDT.

The exhibition will begin a 15-city tour next January. The Smithsonian Institution Traveling Exhibition Service (SITES) has scheduled stops in museums in Florida, Nebraska and Panama.

The startling discovery of Titanoboa was made by a team of scientists working in one of the world’s largest open-pit coal mines at Cerrejón in La Guajira, Colombia. In 2002, a Colombian student visiting the coal mine made an intriguing discovery: a fossilized leaf that hinted at an ancient rainforest from the Paleocene epoch. Over the following decade, collecting expeditions led by the Smithsonian Tropical Research Institute in Panama and the Florida Museum of Natural History at the University of Florida opened a unique window into what some scientists believe to be the first rainforest on Earth. Fossil finds included giant turtles and crocodiles, as well as the first-known bean plants and some of the earliest banana, avocado and chocolate plants. But their most spectacular discovery was the fossilized vertebra of a previously undiscovered species of snake.

“Years ago I watched the Hollywood movie Anaconda (with Jennifer Lopez),” said Carlos Jaramillo of STRI. “Not even in my wildest dreams I would have imagine that we would find even a bigger snake years later! This unique finding tells us some clues about ancient global warming and how plants and animals responded to it, lessons that can be useful to understand our modern world and predict its future.”

Jonathan Bloch of the Florida Museum of Natural History and Jaramillo joined forces with one of the world’s foremost experts in ancient snakes—Jason Head of the University of Nebraska—to unlock the mysteries of this ancient time and learn more about how Titanoboa lived and hunted. The fossilized remains revealed that, after the extinction of the dinosaurs, the tropics were warmer than today and witnessed the birth of the South American rainforest, in which huge creatures fought to become the Earth’s top predators. Dominating this era was Titanoboa, the undisputed largest snake in the history of the world.

Most fossil records of ancient snakes are made up of vertebra like the one on exhibit that launched the Titanoboa investigation. Snake skulls are almost never found as they are extremely fragile and usually disintegrate—making it almost impossible to create a full and accurate picture of these extinct creatures. But during the filming of Titanoboa: Monster Snake, the scientists managed to uncover fragments of three skulls, allowing them to derive for the first time what this ancient giant looked like.

The Smithsonian Channel special explores how this snake would have lived by showing its living cousins, boa constrictors and anacondas, in the Florida Everglades and the Venezuelan grasslands. The scientists’ research yields some intriguing and terrifying insights, including the climate in which it lived and size of the snake. All of these clues come together to paint a picture of Titanoboa’s world.

The life-size replica of Titanoboa was revealed to the public for the first time March 22 in New York City’s Grand Central Terminal.