Attention KatyCats: “Cupcake Katy” Painting of Katy Perry by Will Cotton at the National Portrait Gallery 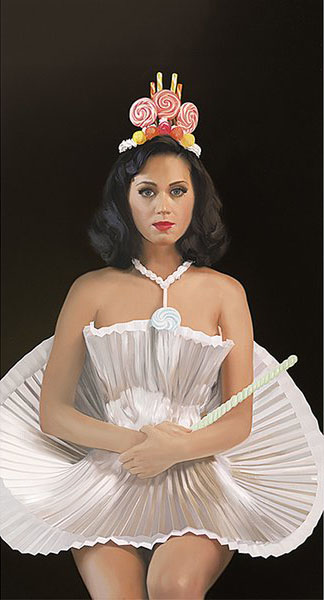 “Cupcake Katy,” a new addition to the Smithsonian’s National Portrait Gallery, portrays internationally successful pop singer Katy Perry. Perry chose distinguished New York academic portrait painter Will Cotton to create her portrait, which was completed in 2010. The oil-on-linen portrait will go on view in the museum June 18 as part of a rotating display of recently acquired portraits.

“Katy Perry comes from an American tradition of strong women entertainers who have ‘turned the tables’ on their audiences by challenging the supposedly superficial representation of their pop personas. On a closer look, they are complex figures: musically powerful, visually alluring and business savvy,” said Kim Sajet, director of the Portrait Gallery. “Will Cotton’s tongue-in-cheek portrait of Katy as a ‘cupcake’ brings to mind a traditional European portrait of a bewitching 18th-century belle—Madame de Pompadour perhaps?—butter melts in neither of their mouths. Sweet but no mere piece of ‘candy,’ the woman is accessorized but not labeled: she’s the one in control.”

Perry rose to fame with numerous chart-topping singles such as “California Gurls,” “Teenage Dream” and “Firework,” and in 2012 she received the honor of being named Billboard’s “Woman of the Year.” She remains the only artist to spend 69 consecutive weeks in the top ten of Billboard’s Hot 100 and is the only artist after Michael Jackson to have produced five top hits from a single album.

“Cupcake Katy” features Perry wearing a dress designed by Cotton and constructed by designer Cynthia Rowley. In her portrait, Perry reigns over the teenage consumer culture she has so successfully navigated. The acquisition of “Cupcake Katy” will enrich the National Portrait Gallery’s important collection of influential women in the music industry.

Cotton and Perry had collaborated previously on the design for the sugary-sweet set of Perry’s “California Gurls” video from 2010’s Teenage Dream album, for which Cotton had also designed the cover. Cotton is interested in exploring the use of advertising icons within consumer culture. He feels that his artistic collaborations with Perry are especially notable in that Perry in particular is “over-the-top, she’s very sugary, saccharine and as sweet as can be. Cotton has humorously dubbed Perry as “Queen Katy of Candy Land.” By painting the cover and working on the video, it disseminated the imagery in a way that the art world just never can.”

The promised gift is coming to the museum from collector Jim Dicke.