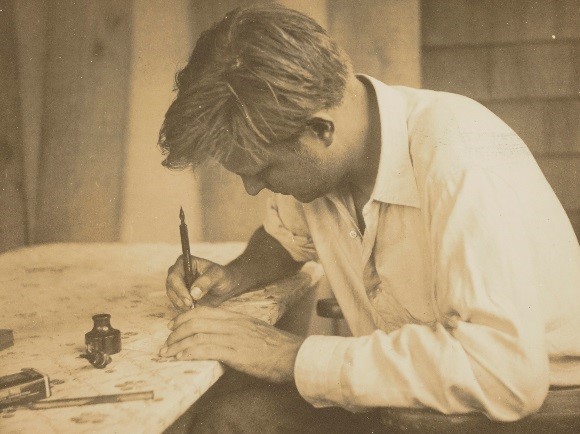 The Smithsonian’s Archives of American Art marks the 100th anniversary of Robert Motherwell’s birth (1915–1991) with the exhibition “Robert Motherwell: A Centennial Celebration.” Featuring a selection of photographs, letters, posters, catalogs and essays, including early drafts, the exhibition illuminates Motherwell’s many roles, the personal relationships that shaped his career and the impact he had on the history of modern art in the 20th century. The exhibition will be on view from Nov. 21 to March 27, 2016, in the Lawrence A. Fleischman Gallery at the Smithsonian’s Donald W. Reynolds Center for American Art and Portraiture.

Included in the exhibition are snapshots of Motherwell by his East Hampton neighbors, Jackson Pollock and Lee Krasner, as well as professional photographs of Motherwell’s wedding to his third wife, Helen Frankenthaler, by acclaimed photographer Hans Namuth. Lengthy letters offer insight into the significant relationships throughout his life. A 1944 missive to William Baziotes offers a fascinating look at the camaraderie that existed between American and European artists-in-exile during the war years. Much later, in 1985, Motherwell formed a friendship with Arthur Danto, one of the era’s leading art critics, via correspondence. Augmenting these personal records are rare printed materials that document the full scope of Motherwell’s career, from an announcement card for his first exhibition in 1944 (likely the only preserved copy) to the program of his memorial service in 1991.

Among the more intimate objects in the exhibition are those that reflect the personal nature of Motherwell and Joseph Cornell’s friendship, one that was maintained outside the public eye. A mutual love of French symbolist poetry and the 19th-century French culture that gave birth to modernism was the foundation on which their friendship was built. Among the items on their relationship in the exhibition are the delicate foil rubbings of the rattan carpet at the Motherwell’s house in October 1946.

“This expertly curated exhibition allows us to better understand how Motherwell’s personal life directly informed his expressive paintings and collages.” said Kate Haw, director of the Archives of American Art. “And the scope of materials across various archival collections, from the papers of his dear friends to the records of his dealers, evidence the depth of his influence on American art.”

The Archives will host an afternoon symposium Dec. 4 in honor of the centenary of Robert Motherwell’s birth. The event will be held from 1 to 5:30 p.m. in the MacMillan Education Center at the Donald W. Reynolds Center for American Art and Portraiture. A reception will follow immediately afterward. This event is supported by the Dedalus Foundation Inc. and is free and open to the public. The schedule and registration schedule are online here.

For updates and to join the conversation, the public can follow @ArchivesAmerArt and use #Motherwell100 on Twitter.

The Archives will celebrate Motherwell’s 101st birthday Jan. 24, 2016, in the Kogod Courtyard at 1 p.m. This event will be free and open to the public.

Motherwell was one of the foremost figures of abstract expressionism. A painter, collagist and printmaker, his “Elegy to the Spanish Republic” and “Open” series are among his best known works. Motherwell was also an influential teacher, editor and writer and was regarded as the primary spokesman of the New York School—a term he coined in 1949.

Born Jan. 24, 1915, in Aberdeen, Wash., Motherwell’s childhood was spent in Salt Lake City, Los Angeles and San Francisco. After graduating from Stanford University, he studied philosophy at Harvard and art history at Columbia before dropping out to devote himself to painting in 1941. Through his friendships with the European artists in exile in New York during World War II, Motherwell was exposed to the diverse strains of European modernism, from surrealist automatism to the abstraction of Mondrian, along with works by Picasso, Matisse and Miró. He drew on these influences to shape a personal language that emphasized the direct expression in his chosen mediums of a complex and personal subject matter.

With William Baziotes and Jackson Pollock, and their contemporaries, Adolph Gottlieb, Barnett Newman, Mark Rothko and Clyfford Still, Motherwell helped forge a new vision of painting that would establish abstract expressionism at the vanguard of post-war painting and transform New York into the epicenter of modern art in the second half of the 20th century.

Founded in 1954, the Archives of American Art fosters advanced research through the accumulation and dissemination of primary sources, unequaled in historical depth and breadth, that document more than 200 years of the nation’s artists and art communities. The Archives provides access to these materials through its exhibitions and publications, including the Archives of American Art Journal, the longest-running scholarly journal in the field of American art. An international leader in the digitizing of archival collections, the Archives also makes more than 2 million digital images freely available online. The oral history collection includes more than 2,200 audio interviews, the largest accumulation of in-depth, first-person accounts of the American art world. For more information, visit the Archives website at www.aaa.si.edu.