Archives of American Art Presents “The Art of Handwriting” 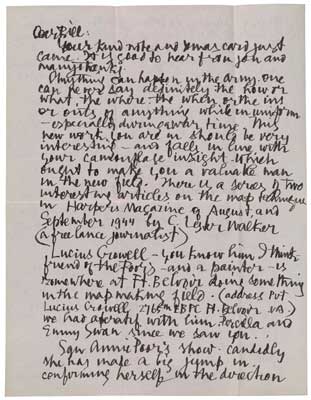 “The Art of Handwriting” reveals how the simple act of writing a letter in one’s own hand can be an artistic act. Every message brims with the personality of the artist at the moment of interplay between hand, eye, mind, pen and paper. The 42 letters on view are all selected from collections in the Archives of American Art.

In the age of emails, texts and tweets, when handwritten letters have ceased to be a primary mode of person-to-person communication, the exhibition explores what can be learned from the handwriting of artists, including Georgia O’Keeffe, Isamu Noguchi, Willem de Kooning and Thomas Eakins. Each letter is accompanied by an interpretation by a leading authority on the artist’s work who discusses how the pressure of line and sense of rhythm show that artist’s signature style.

Among the commentaries: On Grandma Moses’ handwriting, which reflected “twin aspects of her character: the artist and the farmwife….For Moses, writing may have been very similar to both needlework and painting: an everyday act for lovingly recording, sharing, and remembering the riches of family life.” And although Eakins often used a highly controlled and elegant style of writing in his professional correspondence, and he was known for meticulously constructed pictures, a letter to his sister displays “his hurried penmanship, rife with crossed-out words…letters like this show a degree of freedom that can only be glimpsed on rare occasions in the artist’s oil sketches.” The label about Georgia O’Keeffe’s 1939 letter says her handwriting, “…like her paintings, have their own idiosyncratic style. Just as she had no concern for the rules of art, she also had no regard for correct grammatical structure…She never used commas, rarely employed periods, and instead preferred squiggly lines of varying length that seem to mimic the way she spoke or thought.”

The Archives of American Art is the world’s preeminent resource dedicated to collecting and preserving the papers and primary records of the visual arts in America. For more information, visit the Archives website at www.aaa.si.edu.