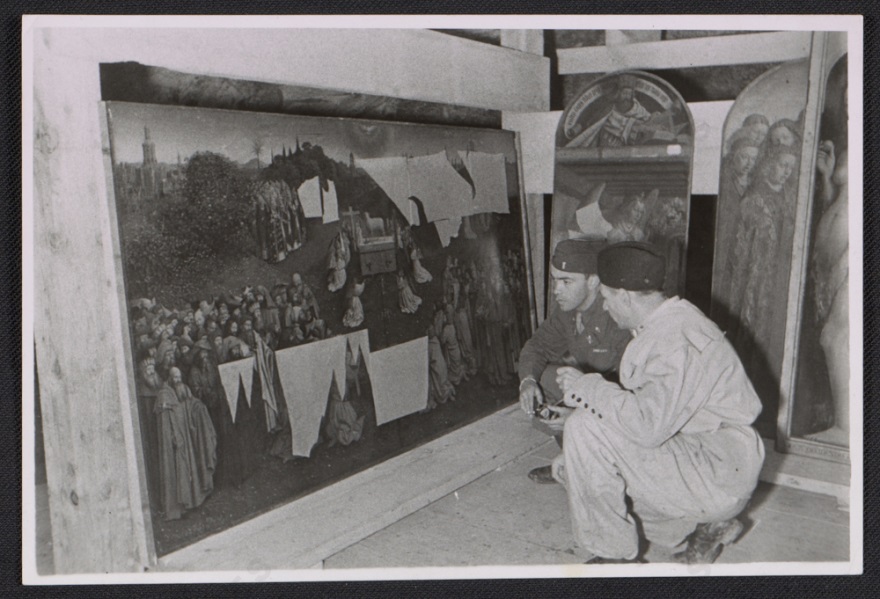 During World War II, an unlikely team of soldiers was charged with identifying and protecting European cultural sites, monuments and buildings from Allied bombing. Officially named the Monuments, Fine Arts and Archives Section, this U.S. Army unit included art curators, scholars, architects, librarians and archivists from the United States and Great Britain. The unit quickly became known as the Monuments Men. Towards the end of the war, their mission changed to one of locating works of art that had been looted by the Nazis. The Monuments Men recovered some of history’s greatest works of art hidden across Germany and Austria—some in castles, others in salt mines.

The Archives’ exhibition, “MONUMENTS MEN: On the Frontline to Save Europe’s Art, 1942-1946,” will present original photographs, official military records and letters that chronicle this extraordinary mission. Visitors will be able to hear the voices of Monuments Men through excerpts of interviews from the Archives’ Oral History Collection. The exhibition will be on display from Feb. 7 to April 20 in the Lawrence A. Fleischman Gallery at the Smithsonian’s Donald W. Reynolds Center for American Art and Portraiture.

The exhibition will feature the personal papers of many prominent Monuments Men and Women. The correspondence illuminates art conservator Stout’s efforts to establish a national wartime Conservation Corps and the challenges and hardships of working on the frontline of war. Historical records and photographs document the magnitude of the Nazi looting, including the collection of stolen artwork amassed by Nazi Germany’s second in command, Hermann Goering. The exhibition also documents the heroic efforts of Rorimer, one of the Monuments Men who located and removed France’s great art treasures from the magnificent Neuschwenstein Castle deep in the Bavarian Alps. Rorimer worked with Rose Valland, a French art curator who spied on the Nazis at great personal risk. Compelling photographs reveal how Monuments Men George Stout and others recovered treasures like Jan and Hubert van Eyck’s “Ghent Alterpiece” and Michelangelo’s famous Bruges sculpture “Madonna and Child” from the Altaussee salt mines in Austria.

There will be gallery talks about the exhibition March 13 and 28 at 1 p.m. in the Lawrence A. Fleischman Gallery.

Based on the true story of the greatest treasure hunt in history, The Monuments Men is an action drama focusing on seven over-the-hill, out-of-shape museum directors, artists, architects, curators and art historians who went to the front lines of World War II to rescue the world’s artistic masterpieces from Nazi thieves and return them to their rightful owners. With the art hidden behind enemy lines, how could they hope to succeed? But as the Monuments Men found themselves in a race against time to avoid the destruction of 1,000 years of culture, they would risk their lives to protect and defend humankind’s greatest achievements. From director George Clooney, the film stars Clooney, Matt Damon, Bill Murray, John Goodman, Jean Dujardin, Bob Balaban, Hugh Bonneville and Cate Blanchett. The screenplay is by Clooney and Grant Heslov, and is based on the book by Robert M. Edsel with Bret Witter. The film is produced by Heslov and Clooney.

The Archives of American Art is the world’s pre-eminent resource dedicated to collecting and preserving the papers and other primary records of the visual arts in America. The collection includes 20 million original letters, photos, sketchbooks, diaries and films and audio recordings of artists, dealers, collectors and curators from the 19th century to the present. The Archives has been a leader in implementing new technologies to provide wider access of these valuable documents around the world.

The Lawrence A. Fleischman Gallery is located at the Smithsonian’s Donald W. Reynolds Center for American Art and Portraiture on Eighth and F streets, N.W. in Washington, D.C., and is open daily from 11:30 a.m. to 7 p.m. For more information, visit the Archives website.