Alien Planet Found Spiraling to Its Doom Around an Aging Star

Condemned Planet Could Help Answer Questions About the Fate of Other Worlds as Their Solar Systems Evolve
December 19, 2022
News Release 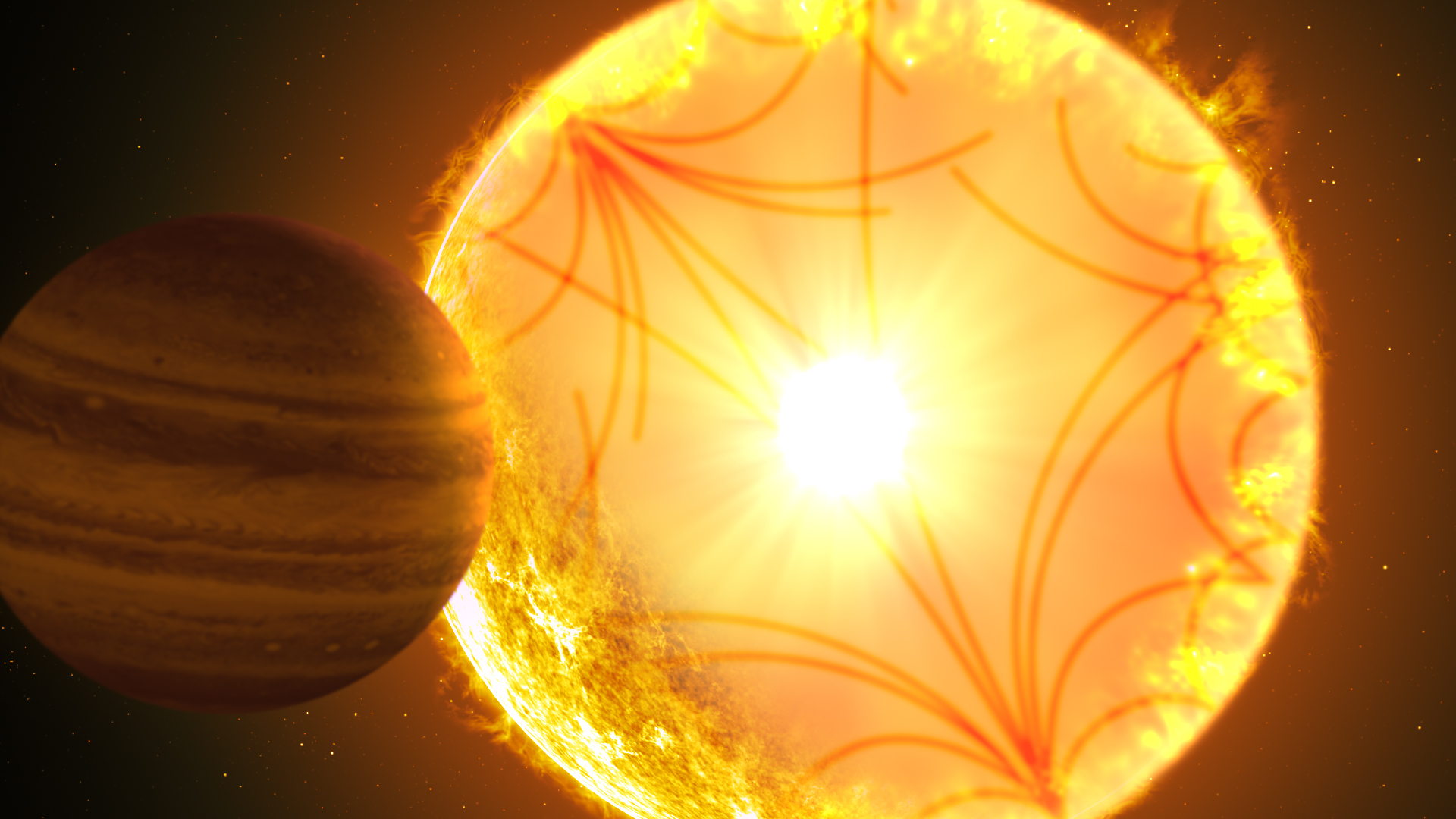 For the first time, astronomers have spotted an exoplanet whose orbit is decaying around an evolved, or older, host star. The stricken world appears destined to spiral closer and closer to its maturing star until collision and ultimate obliteration.

The discovery offers new insights into the long-winded process of planetary orbital decay by providing the first look at a system at this late stage of evolution. Death-by-star is a fate thought to await many worlds and could be the Earth's ultimate goodbye billions of years from now as the sun grows older.

"We've previously detected evidence for exoplanets inspiraling toward their stars, but we have never before seen such a planet around an evolved star," said Shreyas Vissapragada, a 51 Pegasi b Fellow at the Center for Astrophysics | Harvard & Smithsonian and lead author of a new study describing the results. "Theory predicts that evolved stars are very effective at sapping energy from their planets' orbits, and now we can test those theories with observations."

The findings were published Monday, Dec. 19, in The Astrophysical Journal Letters.

The ill-fated exoplanet is designated Kepler-1658b. As its name indicates, astronomers discovered the exoplanet with the Kepler space telescope, a pioneering planet-hunting mission that launched in 2009. Oddly enough, the world was the very first new exoplanet candidate Kepler ever observed. Yet it took nearly a decade to confirm the planet's existence, at which time the object entered Kepler's catalog officially as the 1658th entry.

Kepler-1658b is a so-called hot Jupiter, the nickname given to exoplanets on par with Jupiter's mass and size but in scorchingly ultra-close orbits about their host stars. For Kepler-1658b, that distance is merely an eighth of the space between the sun and its tightest orbiting planet, Mercury. For hot Jupiters and other planets like Kepler-1658b that are already very close to their stars, orbital decay looks certain to culminate in destruction.

Measuring the orbital decay of exoplanets has challenged researchers because the process is very slow and gradual. In the case of Kepler-1658b, according to the new study, its orbital period is decreasing at the miniscule rate of about 131 milliseconds (thousandths of a second) per year, with a shorter orbit indicating the planet has moved closer to its star.

Detecting this decline required multiple years of careful observation. The watch started with Kepler and then was picked up by the Palomar Observatory’s Hale Telescope in Southern California and finally the Transiting Exoplanet Survey Telescope, or TESS, which launched in 2018. All three instruments captured transits, the term for when an exoplanet crosses the face of its star and causes a very slight dimming of the star’s brightness. Over the past 13 years, the interval between Kepler-1658b’s transits has slightly but steadily decreased.

Tides are the root cause of the orbital decay experienced by Kepler-1658b—the same phenomenon responsible for the daily rise and fall in Earth’s oceans. Tides are generated by gravitational interactions between two orbiting bodies, such as between the Earth and the moon or Kepler-1658b and its star. The bodies’ gravities distort each other’s shapes, and as the bodies respond to these changes, energy is released. Depending on the distances between, sizes and rotation rates of the bodies involved, these tidal interactions can result in bodies pushing each other away—the case for the Earth and the slowly outward-spiraling moon—or inward, as with Kepler-1658b toward its star.

There is still a lot researchers do not understand about these dynamics, particularly in star-planet scenarios. Accordingly, further study of the Kepler-1658 system should prove instructive.

The star has evolved to the point in its stellar life cycle where it has started to expand, just as the sun is expected to, and has entered into what astronomers call a subgiant phase. The internal structure of evolved stars should more readily lead to dissipation of tidal energy taken from hosted planets’ orbits compared to unevolved stars like the sun. This accelerates the orbital decay process, making it easier to study on human timescales.

The results further help in explaining an intrinsic oddity about Kepler-1658b, which appears brighter and hotter than expected. The tidal interactions shrinking the planet’s orbit may also be cranking out extra energy within the planet itself, the team said.

Vissapragada points to a similar situation with Jupiter’s moon Io, the most volcanic body in the solar system. The gravitational push-and-pull from Jupiter on Io melts the planet’s innards. This molten rock then erupts out onto the moon’s famously infernal, pizza-like surface of yellow sulfurous deposits and fresh red lava.

Stacking additional observations of Kepler-1658b should shed more light on celestial body interactions. And, with TESS slated to keep scrutinizing thousands of nearby stars, Vissapragada and colleagues expect the telescope to uncover numerous other instances of exoplanets circling down the drains of their host stars.

"Now that we have evidence of inspiraling of a planet around an evolved star, we can really start to refine our models of tidal physics," Vissapragada said. "The Kepler-1658 system can serve as a celestial laboratory in this way for years to come, and with any luck, there will soon be many more of these labs."

Vissapragada, who recently joined the Center for Astrophysics a few months ago and is now being mentored by Mercedes Lopez-Morales, looks forward to the science of exoplanets continuing to dramatically advance.

"Shreyas has been a welcome addition to our team working on characterizing the evolution of exoplanets and their atmospheres," said Lopez-Morales, an astronomer at the Center for Astrophysics.

"I can't wait to see what all of us end up discovering together," Vissapragada said.

About the Center for Astrophysics | Harvard & Smithsonian