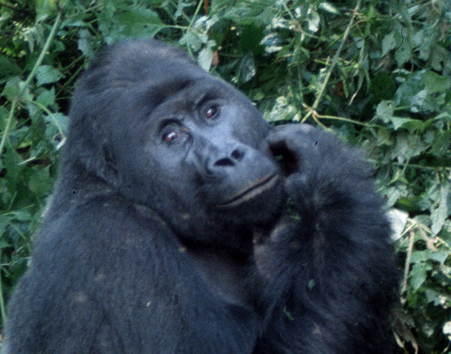 The population of the world’s largest primate, Grauer’s gorilla, found only in the conflict-plagued Democratic Republic of the Congo (DRC), declined calamitously in 20 years according to a report co-authored by a Smithsonian scientist and published by the Wildlife Conservation Society, Flora and Fauna International and the Congolese Institute for the Conservation of Nature. From a 1998 estimate of 17,000 individuals, the population has dropped by 77 percent. Fewer than 3,800 individuals remain. The team implicates warfare, illegal hunting and mining as key drivers of the Grauer’s gorilla’s demise.

“The crash in the gorilla population is a consequence of the human tragedy that has played out in eastern DRC,” said Jefferson Hall, staff scientist at the Smithsonian Tropical Research Institute. “Armed factions terrorize innocent people and divide up the spoils of war with absolutely no concern for the victims or the environment.”

Grauer’s gorilla, Gorilla beringei graueri, is found only in forests of the eastern DRC. It is closely related to the mountain gorilla, G. beringei beringei, of montane forests in the Albertine Rift. Males can weigh more than 400 pounds, making this the largest gorilla subspecies and hence the largest primate in the world. Another species of gorilla, the Western Gorilla, G. gorilla, is found in central Africa west of the Congo River.

The collapse of the Grauer’s gorilla is rooted in the Rwandan genocide of 1994, which drove hundreds of thousands of refugees into the eastern DRC. Waves of fleeing refugees triggered a civil war beginning in 1996. It is estimated that more than 5 million people died before it ended in 2003.

The DRC is rich in many minerals, notably coltan, which is in demand for electronics. Disruptions in civil society resulted in the expansion of artisanal mining, often in remote forests including protected areas. Far from towns and villages, miners frequently resort to hunting to provide themselves with food. Even though they are legally protected, gorillas are a prized target because of their large size and because they roam in easily tracked family groups.

Hall spent three years in the DRC from 1994 to 1996 leading the first range-wide surveys of Grauer’s gorilla. His team found more animals—about 17,000—than previously estimated. These historical data provided the baseline for the new estimates. Because of the danger from continuing instability and the presence of militias, Andrew Plumptre and Stuart Nixon, conservationists with the Wildlife Conservation Society and the Chester Zoo, respectively, and the other authors of the new report used a novel method to incorporate data collected by local communities and forest rangers.

The new surveys revealed that numbers of Grauer’s gorillas have plummeted to just 3,800. The authors recommend raising the level of threat to Grauer’s gorillas on the International Union for Conservation of Nature’s Red List of Threatened Species from “endangered” to “critically endangered,” which indicates an extremely high risk of extinction in the wild.

Reversing the gorilla’s perilous situation will take a great deal of effort and more funds than are available, the authors say. It will require disarming the militias in the eastern DRC and controlling illegal artisanal mining and the poaching that accompanies it. Other recommendations include new protected areas and enhanced support for existing ones, along with community management of reserves and programs to raise awareness of the crisis gorillas and other wildlife face in the region.

“Human dignity and welfare are inextricably linked to the dignity and survival of wild animals like Grauer’s gorilla and the ecosystems that sustain them,” said lead author of the report, Plumptre. “The outcomes of regional armed conflict have global impact on our survival. The activity of armed militias controlling mining camps in the Grauer’s gorilla heartland is likely to eliminate the Grauer’s gorilla entirely. Conservationists are pushing for the establishment of the Reserve des Gorilles de Punia and the Itombwe Reserve, which has strong community support, along with the reinforcement of the Kahuzi-Biega National Park, arguing that this would make a huge difference for the gorillas.”

“The bright spot in all this is that we have seen, over and over again, dedicated Congolese conservationists risk their lives to make a difference,” Hall said. “Thanks to these individuals, there is still hope and the opportunity to save these animals and the ecosystems they represent.”