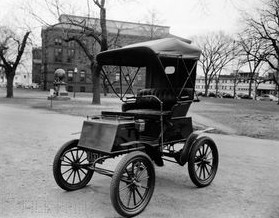 The popularity of mass-produced electric or hybrid cars is recent, but the idea behind using electricity as a power source for cars is more than 100 years old. The Smithsonian’s National Museum of American History will explore the history of the electric car from the early 20th century to the present in a new display as part of the “America on the Move” exhibition opening Oct. 27 through January 2012.

“Electrifying Cars” showcases two cars—a 1904 Columbia electric runabout, the best-selling car in the United States at the turn of the century and a 1913 Ford Model T touring car, a gasoline car equipped with an early type of electric starter and electric headlights. The cars, along with a battery charger for General Motors’ EV1 and images of additional electric models, car owners and power sources, follow the historical, cultural and physical development of the electric car.

“Electricity has always been a popular feature of cars,” said Roger White, associate curator of Road Transportation. “By the 1920s manufacturers used batteries not to propel cars but to apply the conveniences of electric cars to gasoline-powered cars.” He added that in recent years a market has developed for all-electric cars and hybrid cars with gasoline and electric propulsion because they reduce energy costs and air pollution. “These cars can draw energy from a variety of sources including fossil fuels, regenerative braking and renewable sources such as solar panels and wind power,” he said.

In the early 20th century, Americans could choose electric, steam or gasoline cars. Wealthy city residents, particularly women, bought electric cars because they were easier to operate. By the 1920s, gasoline-powered cars were the vehicle of choice because they could be driven much farther than electric cars between fill-ups, and gasoline pumps, unlike electric power stations, could be readily located anywhere. Since the 1960s, smog, greenhouse gases, global warming and strained oil supplies have prompted researchers, government and the public to take a new look at electric hybrid and all-electric cars. In the 1990s GM and other manufacturers worked to put electric cars on the market. GM’s EV1, Honda’s EV+, Ford’s Ranger EV and Toyota’s RAV4 EV were leased. But by 2003, the manufacturers determined that the electric car was not commercially viable and ended the leases. By 2010, the market led to the reintroduction of electric cars, and for the first time in almost 100 years consumers could purchase all-electric or new types of hybrid cars.

The museum’s long-term exhibition, “America on the Move,” allows visitors to travel back in time and experience transportation as it changed America. It encompasses nearly 26,000 square feet on the first floor of the museum, and includes 340 objects and 19 historic settings in chronological order. From the coming of the railroad to a California town in 1876 to the interstate highway system, “America on the Move” takes visitors on a fascinating journey.