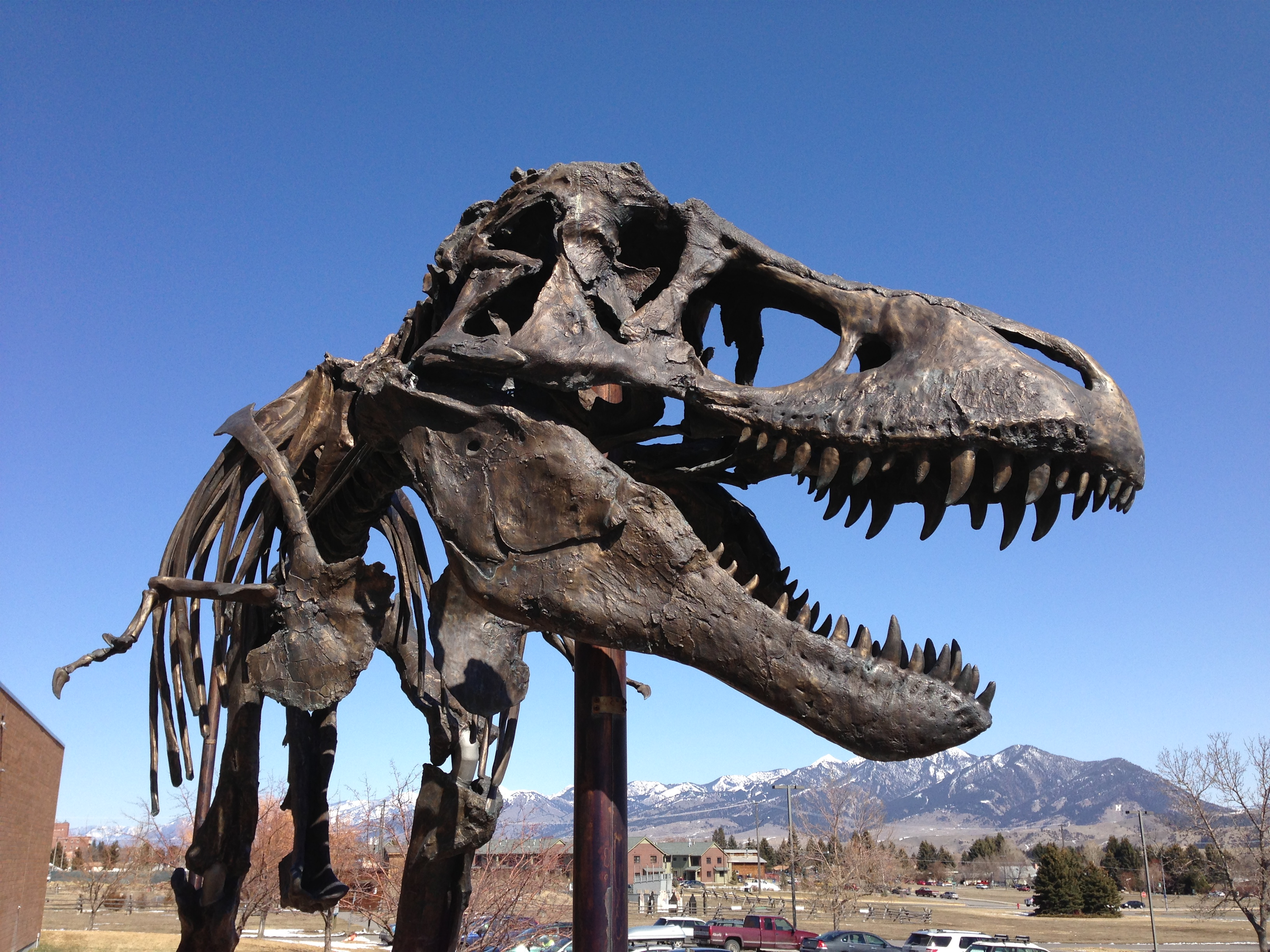 What does the name “Tyrannosaurus rex” mean?

“Tyrannosaurus” is Greek for “tyrant lizard,” and “rex” means “king” in Latin. So, Tyrannosaurus rex was “King of the Tyrant Lizards.”

When and where did T. rex live?

T. rex  lived about 66–68 million years ago during the Cretaceous Period in the western United States, including Montana and Wyoming.

What was the world like when T. rex was alive?

Although the current landscape of Wyoming and Montana is dry and grassy, it probably resembled a Louisiana floodplain when T. rex walked the Earth. The global climate was also warmer than it is now. Lush plant life supported a diverse animal community ranging from dinosaurs to mammals to insects.

What did T. rex eat?

T. rex skulls and teeth reveal that it was a meat eater, and judging from its size, it could have eaten whatever animal it could catch or scavenge.

How did T. rex see and hear?

T. rex had senses that were similar to those of its close relatives, birds and crocodiles. Because of its forward-facing eyes, it might have had better depth perception than most other predatory dinosaurs.

T. rex’s olfactory bulbs (the part of the brain used to process smell) were large, and scientists believe that T. rex had a good sense of smell, much like other predatory dinosaurs.

How quickly did T. rex run?

Recent computer models and other evidence suggest that T. rex did not run but walked at speeds up to 15 mph. Still, 15 mph was fast enough to hunt down other large dinosaurs, most of which were designed for even slower movement.

Why were T. rex’s arms so small?

T. rex’s arms were powerfully muscled and ended in two mobile fingers with large claws. Scientists are not exactly sure how T. rex used its arms, but they know that they were too short to help with eating. One hypothesis is that T. rex’s arms became shorter as its head grew more massive to prevent the dinosaur from becoming top-heavy. Another theory is that the enormous head of T. rex replaced the original grabbing function of its arms, which could then have evolved for other uses.

Was T. rex the biggest land predator ever?

T. rex was certainly the biggest two-legged predator in its Late Cretaceous ecosystem, and it was one of the largest predators ever to live on land. Other species, such as Carcharodontosaurus, Giganotosaurus and Spinosaurus, were similar in size but lived earlier in the Cretaceous Period. They belonged to different families of predatory dinosaurs than T. rex.

How quickly did T. rex grow?

T. rex grew much faster than typical reptiles do today, and scientists estimate that it reached its full size in less than 20 years. To grow this quickly, T. rex may have increased its size by up to about 1,500 pounds per year during the middle of its “teenage” growth spurt.

How long did T. rex live?

After reaching its adult size, a T. rex could have lived for another decade. Based on growth rings in fossil bones, scientists know that the longest-lived T. rex specimen was 28 when it died and suffered many injuries over its lifetime.

How closely is T. rex related to birds?

Birds are actually a type of dinosaur from the same group as T. rex. Both T. rex and birds had hollow bones and air sacs, and some members of the tyrannosaurid family even had feathers. Birds first evolved in the Jurassic, as did the earliest tyrannosaurs.

Who owns the Nation’s T. rex? And how did it get its name?

Technically, the people of the United States of America own this dinosaur. Any fossils found on federal land belong to the U.S. Government. That is why the museum is calling this specimen the Nation’s T. rex. Although the Smithsonian also is a federal institution, the Nation’s T. rex is still formally in the care of the U.S. Army Corps of Engineers and will be displayed in D.C. on a 50-year loan.

Where and when was the Nation’s T. rex found?

How old was the Nation’s T. rex when it died?

The Nation’s T. rex was a young adult when it died, about 18 years of age, and may not have been fully grown.

How big was the Nation’s T. rex?

How complete is the Nation’s T. rex?

It is one of the most complete T. rex specimens ever found, with approximately 85 percent of the skeleton preserved.

Was the Nation’s T. rex a male or female?

Scientists are not sure if the Nation’s T. rex was male or female. It is only rarely possible to tell the sex of a dinosaur from its bone tissue.

How did the Nation’s T. rex die?

Like most dinosaurs, the marks on the bones of the Nation’s T. rex indicate that it likely suffered from injuries and disease throughout its life. However, scientists are not sure about the cause of death. They do know that this dinosaur died in or near a riverbed, and it is likely that its carcass was covered by sediment soon after it perished.

Where will the Nation’s T. rex go in the museum’s new dinosaur and fossil hall?

The Nation’s T. rex will be the centerpiece of the new dinosaur and fossil hall, which is scheduled to open in 2019.