Harvey Pratt, the designer whose concept was selected to create the Smithsonian’s National Native American Veterans Memorial for the National Museum of the American Indian, is a Cheyenne and Arapaho tribal member. He is a self-taught artist from Oklahoma and a forensic artist. Pratt works in oil, watercolor, metal, clay and wood. His works include themes of Native American history and tradition and the Cheyenne people.

Pratt’s public art works include a 7-foot sculptural relief depicting a bald eagle on a Native American shield at the entrance to the Oklahoma State Bureau of Investigation building and a 37-foot-long mural progressing from sepia to color depicting the bureau’s case history. His commissions include one from the state of Colorado (2017) to create a life-size bronze sculpture in Denver to memorialize the victims of the Sand Creek Massacre. His paintings are among the permanent collections of the National Park Service, notably his painting of the 1868 Washita Massacre, “Crimson Dawn” at the Historic Site in Cheyenne, Oklahoma.

Born in Guthrie, Oklahoma, Pratt’s first artistic endeavor was sculpting his own toys—action figures from clay given to him by his grandfather. He credits his parents and second- and third-grade school teachers for encouraging his artistic pursuits and respect for veterans.

A veteran himself, Pratt served in Vietnam from 1962 to 1965. A U.S. Marine in Air Rescue and Security, he was stationed at Da Nang Air Base. Pratt is the chairperson of the Indian Arts and Crafts Board of the U.S. Department of the Interior. He is recognized by the Cheyenne People as an outstanding Southern Cheyenne, and he was inducted as a traditional Peace Chief—the Cheyenne Nation’s highest honor.

Pratt received a degree in political science from Oklahoma State University and Special Training at the FBI National Academy (1981). 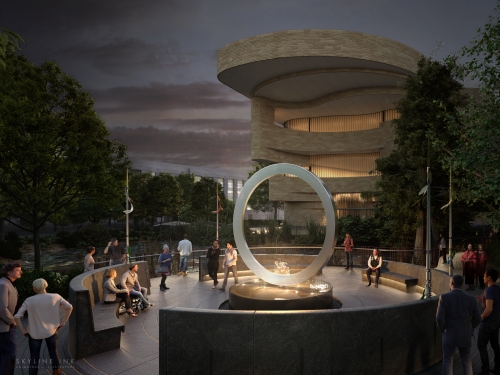