National Museum of the American Indian on the National Mall 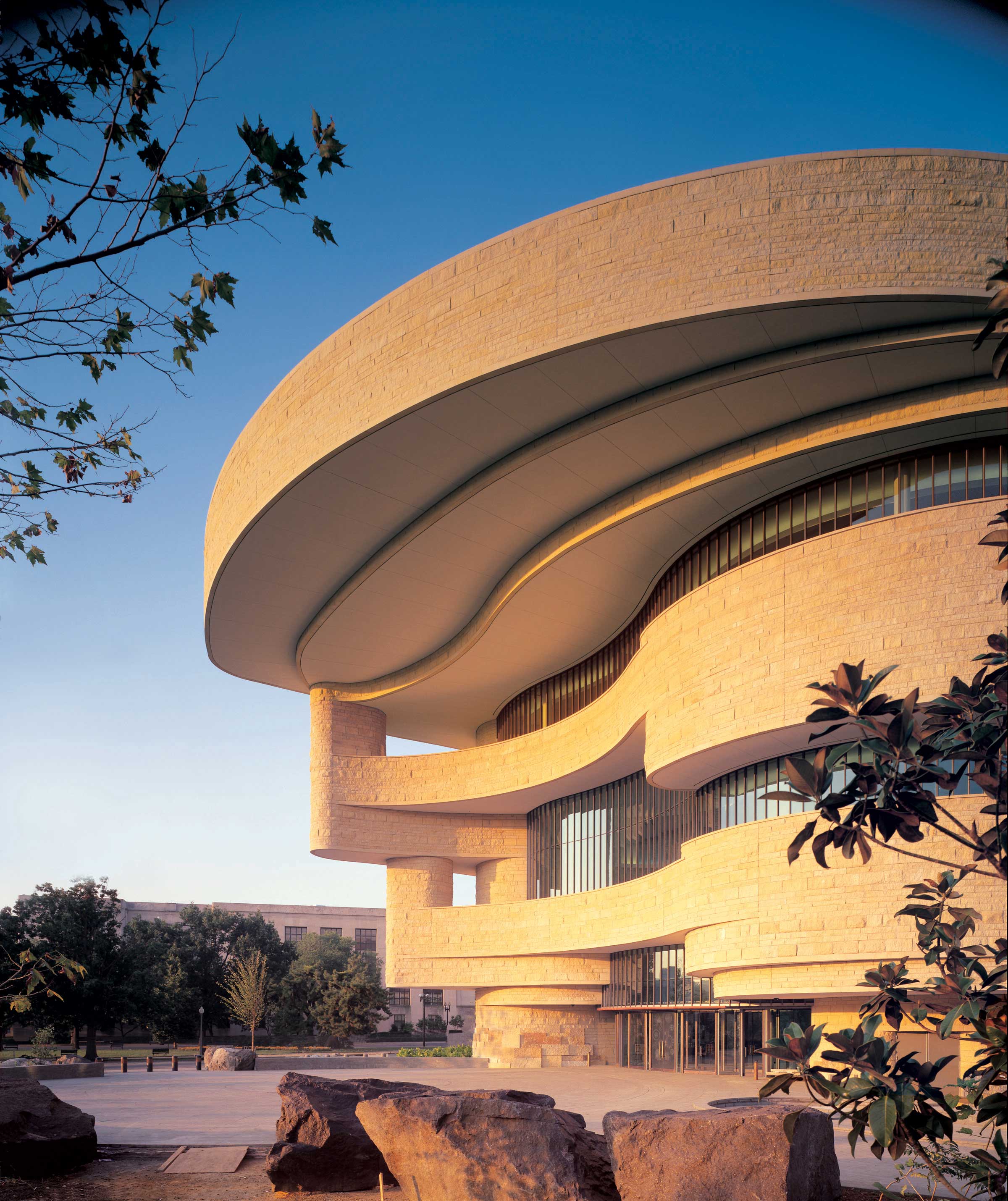 In partnership with Native peoples and their allies, the National Museum of the American Indian fosters a richer shared human experience through a more informed understanding of Native peoples.

The museum was established in 1989 through an Act of Congress. It includes the National Museum of the American Indian on the National Mall; the George Gustav Heye Center, a permanent museum in lower Manhattan; and the Cultural Resources Center, a research and collections facility in Suitland, Maryland.

The National Museum of the American Indian on the National Mall opened its doors to the public Sept. 21, 2004. The five-story, 441,000-square-foot curvilinear building is located between the Smithsonian’s National Air and Space Museum and the U.S. Capitol. The textured golden-colored Kasota limestone exterior evokes natural rock formations formed by wind and water through time. Set in a 4.25-acre landscaped site with wetlands and 40 boulders known as “grandfather rocks,” the museum sits in sharp contrast to its neighboring buildings. Its special features—an entrance facing east toward the morning sun, a window with eight prisms and a 120-foot-high spaced called the Potomac Atrium—were designed in consultation with many Native Americans during a four-year period.

The Lelawi (leh-LAH-wee) Theater is a 120-seat circular theater located on the fourth level. It presents a 13-minute multimedia experience titled “Who We Are” to prepare museumgoers for their visit and conveys the significant presence and diversity of Native peoples throughout the Americas.

The Cultural Resources Center is home to the collections and research programs of the museum. The facility, which opened in 1999, is located just outside of Washington, D.C., in Suitland, Maryland. It houses the museum’s collections; curatorial and repatriation offices; laboratories and workrooms for conservation, collections management and registration; a library and archives center; and indoor and outdoor spaces for Native cultural care practices and use of the collections. Collections

The museum has one of the most extensive collections of Native American arts and artifacts in the world, representing more than 12,000 years of history and over 1,200 Indigenous cultures throughout the Americas.

The collection is composed of more than 1 million objects and photographs and more than 500,000 digitized images, films and other media documenting Native communities, events and organizations.

The museum’s long-term exhibitions are:

In addition, the museum hosts a selection of changing exhibitions that present and reaffirm the Native voice. These include exhibitions developed by the museum from its collections, installations of contemporary Native art and significant traveling exhibitions from other institutions.

The National Native American Veterans Memorial sits on the grounds of the National Museum of the American Indian and was commissioned by Congress to give “all Americans the opportunity to learn of the proud and courageous tradition of service of Native Americans in the Armed Forces of the United States.” This is the first national landmark in Washington to focus on the contributions of American Indians, Alaska Natives and Native Hawaiians who have served in the military. It opened Nov. 11, 2020.

The memorial design is by Harvey Pratt (Cheyenne and Arapaho Tribes of Oklahoma), a multimedia artist, retired forensic artist and Marine Corps Vietnam veteran. The design features an elevated stainless steel circle resting on a carved stone drum. It also incorporates water for sacred ceremonies, benches for gatherings and four lances where veterans, family members, tribal leaders and others can tie cloths for prayers and healing.

The memorial will be formally dedicated Nov. 11, 2022. The museum will host a ceremony, a Native veterans’ procession and a weekend of activities to mark the occasion.

Native Knowledge 360°, the museum’s national educational initiative, is a set of teaching resources that provides educators and students with new perspectives on Native American history and cultures. It offers educational materials and training for teachers that incorporate Native narratives, more comprehensive histories and accurate information to enlighten and inform teaching and learning about Native America. It challenges common assumptions about Native peoples—their cultures, their roles in United States and world history, and their contributions to the arts, sciences and literature. The initiative provides a view that includes not only the past, but also the richness and vibrancy of Native peoples and cultures today.

The imagiNATIONS Activity Center opened in 2011. This family-friendly space is geared to the museum’s younger visitors and is filled with interactive and hands-on learning experiences. (The center is currently closed.)

The National Museum of the American Indian hosts a variety of free cultural arts programs, including Native music and dance performances, theater, films, arts and crafts demonstrations, symposia and more. A schedule of events is available on the museum’s website.

Mitsitam (mit-seh-TOM) means “Let’s eat!” in the Native language of the Delaware and Piscataway peoples. The museum’s Mitsitam Native Foods Cafe enhances the museum experience by providing visitors the opportunity to enjoy the Indigenous cuisines of the Americas and to explore the history of Native foods. The cafe features Native foods found throughout the Western Hemisphere. Each of the five food stations—Contemporary Native; Mountains and Plains; Native Comfort; Oceans, Sea and Streams; and The Three Sisters—depict regional lifeways related to cooking techniques, ingredients and flavors found in traditional and contemporary dishes.

The Roanoke Museum Store presents Native American artistry from the past and present, illustrating how different artists interpret cultural traditions and art forms. The store features jewelry, textiles and other works by Native artisans; souvenirs; and children’s books and toys. Selected books, music and gifts are also available in the museum’s online bookstore and the Smithsonian Store.

The name “Roanoke” reflects the importance of waterways to Native commerce, a reference to the shells once used as currency by local Native peoples.

The museum is located at Third Street and Maryland Avenue S.W. in Washington, D.C. It is currently open Thursdays through Sundays from 10 a.m. to 5:30 p.m. Admission is free. The nearest Metro station is L’Enfant Plaza. Exit toward Maryland Avenue/Smithsonian museums. Bus lines are 30, 32, 34–36—Friendship Heights/Southern Avenue. Connect with the museum on Facebook, Instagram, Twitter, YouTube and AmericanIndian.si.edu.