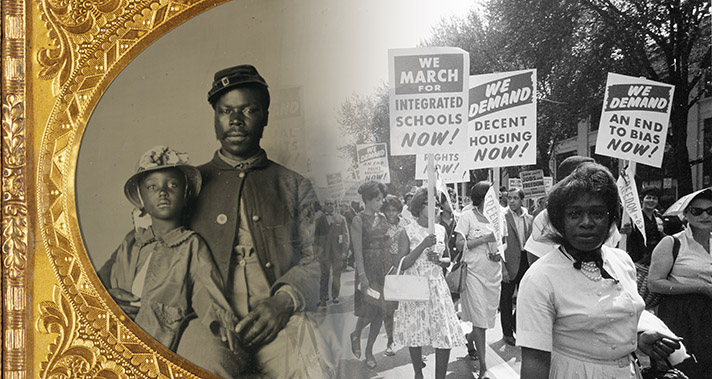 A Century in the Making: Building the National Museum of African American History and Culture (Concourse level)

The Smithsonian’s National Museum of African American History and Culture will open on the National Mall Sept. 24, but the effort to build the museum began more than 100 years ago. This exhibit, “A Century in the Making,” explores the journey toward fulfillment of this long-held dream, providing an overview of the century-long struggle that began in 1915 and its culminating achievements. Opening the museum has involved the efforts of presidents and members of Congress, curators and architects, art collectors and army veterans, celebrities and ordinary citizens. Visitors will learn the inspiration behind the museum’s architectural building design and the significance of the museum’s unique location on the National Mall, at the center of Washington’s historic core. Curators: Joanne Hyppolite and Michelle Wilkinson

As the centerpiece of the museum, this exhibition explores the complex story of slavery and freedom, a story standing at the core of our national experience. Beginning in the 15th century with the transatlantic slave trade, through the Civil War and the Emancipation Proclamation, the exhibition uses personal stories to explore the economic and political legacies of slavery for all Americans. Priceless objects featured include Harriett Tubman’s shawl and hymn book (c. 1876); Nat Turner’s bible (1830s); shackles used for an enslaved child; a slave cabin from Edisto Island, S.C.; a pocket copy of the Emancipation Proclamation read from by soldiers bringing news of freedom to the U.S. Colored Troops; and freedom papers (c. 1852) carried by a former slave, Joseph Trammell. Curator: Nancy Bercaw

This exhibition takes visitors from the end of Reconstruction through the civil rights movement of the 1960s. It is rich with history and artifacts that capture the major aspects of the ongoing struggle by the nation in general and African Americans in particular to define and make real the meaning of freedom. The exhibition will illustrate how African Americans not only survived the challenges set before them but crafted an important role for themselves in the nation, and how the nation was changed as a consequence of these struggles. Some of the most powerful artifacts in the museum are located here: Emmett Till’s casket; a dress made by Rosa Parks; a prison tower from the Louisiana State Penitentiary in Angola; a segregated Southern Railway rail car from the Jim Crow era; the Greensboro, N.C., Woolworth’s lunch-counter stools; and a house (c. 1874) built, owned and lived in by freed slaves in Maryland. Curator: Spencer Crew

A Changing America: 1968 and Beyond

This section illustrates the impact of African Americans on life in the United States—social, economic, political and cultural—from the death of Martin Luther King Jr. to the second election of President Barack Obama. Subjects include the Black Arts Movement, hip-hop, the Black Panthers, the rise of the black middle class and, more recently, the #BlackLivesMatter movement. This exhibition encompasses several sections focusing on Black Power era of the 1960s and ’70s, Black Studies at universities, racial dynamics in cities and suburbs and the changing role of the black middle class. The year 1968 is seen as a turning point in the modern struggle for freedom and equality with artifacts such as painted plywood panels from Resurrection City, a “Huey Newton, Minister of Defense” poster and handmade banners from the 2008 presidential election. Curators: William Pretzer and Michelle Wilkinson

This exhibition explores the idea of place and region as a crucial component of the African American experience through an interactive multimedia area called the Hometown Hub, where visitors will engage with stories about migration and other themes. Surrounding the hub will be 10 case studies of places in the U.S. illustrating the distinct flavor and experience of each. These place studies will contain a mix of diverse stories—well known and unknown; mainstream and edgy; celebratory and challenging. These include: Chicago (black urban life and home of the Chicago Defender newspaper; Oak Bluffs (leisure in Martha’s Vineyard, Mass.); Tulsa, Okla. (Black Wall Street, the story of the riot and rebirth); South Carolina’s low country (a story of life in the rice fields); Greenville, Miss. (images of segregated Mississippi through the lens of a photo studio); and Bronx, N.Y. (a story about the birth of hip-hop). Curator: Paul Gardullo

Making a Way Out of No Way

The stories in this gallery show the ways in which African Americans created possibilities in a world that denied them opportunities. These stories reflect the perseverance, resourcefulness and resilience required by African Americans to survive and thrive in America. Each story presents concrete actions and choices that people made to contest the racial status quo in America, challenging visitors to reconsider the notion of freedom as granted to African Americans and to see freedom, along with its privileges and responsibilities, as earned by African Americans. The three main sections are: an introductory space with five iconic artifacts complemented by multimedia components; the institutional pillars of African American life—education, religion, business, organizations and the press; and a tradition of activism. Among the featured stories will be a Rosenwald School in South Carolina, the First A.M.E. Church in Los Angeles and Mary McLeod Bethune and the National Council of Negro Women in Washington, D.C. Curators: Michèle Gates Moresi and Kathleen Kendrick

This exhibition will look at the contributions of athletes on and off the field. Because sports were among the first and most high-profile organizations to accept African Americans on relative terms of equality, sports have a unique role in American culture. Types of artifacts on display will include sports equipment; awards, trophies and photos; training logs and playbooks; and posters and flyers. A grip bag and uneven-bar grips used by African American gymnast Gabby Douglas in the 2012 Olympics, a white terrycloth robe worn by Muhammad Ali and the track shoes and gold medals of Carl Lewis are among the artifacts in the museum’s sports collection. Curator: Damion Thomas

The military gallery exhibition will convey a sense of appreciation and respect for the military service of African Americans from the American Revolution to the current war on terrorism. It establishes an understanding that the African American military experience shapes opportunities for the greater community and has profoundly shaped the nation. This exhibition will help visitors understand the African American military experience in three areas: “Struggle for Freedom” focusing on the American Revolution, the War of 1812 and the Civil War; “Segregated Military,” about the Indian Wars, Spanish-American War and World Wars I and II; and “Stirrings of Change to a Colorblind Military,” examining the Korean and Vietnam wars and today’s war on terrorism. Artifacts include Civil War badges, weapons and photographs, Flag of the 9th Regiment U.S. Colored Volunteers, a WWI Croix de Guerre medal awarded to U.S. soldier Lawrence McVey and various Tuskegee Airmen materials. Guest Curator: Krewasky Salter

This exhibition tells the story of African American music from the arrival of the first Africans to today’s hip-hop. Through its content, the exhibition will be the space where history and culture intermingle and where music serves as the crossroads between musical traditions and stories of cultural and social development. The gallery is organized through stories of musical genres and themes rather than chronologically, covering classical, sacred, rock ’n’ roll, hip-hop and more.

Among the artifacts in this sound-filled area will be Marian Anderson’s outfit from her 1939 concert at the Lincoln Memorial and a neon sign from Minton’s Playhouse (1938) in Harlem, known as the birthplace of bebop where Thelonious Monk, Charlie Parker and Dizzy Gillespie performed at Monday-night jam sessions. Thomas Dorsey (known as the father of gospel) will be represented by the piano and bench he used at the Pilgrim Baptist Church in Chicago, where he served as music director for 40 years. Mahalia Jackson, Aretha Franklin and The Staples Singers are among those who sang at the church. From the modern era, the exhibition will feature Chuck Berry’s red Cadillac and Public Enemy, the group that voiced the tenets of black pride and racial awareness. Curator: Dwandalyn Reece

This exhibition is an introduction to the concept of African American and African diaspora culture. It examines style (identity, political expression and attitudes expressed in clothing, dress, hair and jewelry), food and foodways, artistry and creativity through craftsmanship, social dance and gesture, and language. Curator: Joanne Hyppolite

This art exhibition will illustrate the critical role that African American artists played in shaping the history of American art. It will feature seven thematic sections and one changing exhibition gallery. Works will include paintings, sculpture, works on paper, art installations, mixed media, photography and digital media. The history and relevance of each work will be available to visitors through a multimedia platform. Curators: Tuliza Fleming and Jacquelyn Serwer

This exhibition will explore the history of African Americans in theater, film and television in order to celebrate their creative achievements, demonstrate their cultural impact and illuminate their struggles for equal representation on the stage of American entertainment. Visitors will see how African Americans transformed the ways they are represented onstage by challenging racial discrimination and stereotypes and striving to produce more positive, authentic and diverse images of African American identity and experience. Together these stories will suggest how African American performing artists also paved the way for broader social change. Stories include Paul Robeson’s role in Othello, Ntozake Shange’s For Colored Girls Who Have Considered Suicide/When the Rainbow Is Enuf and the Black Stuntmen’s Association in Hollywood. Curator: Kathleen Kendrick