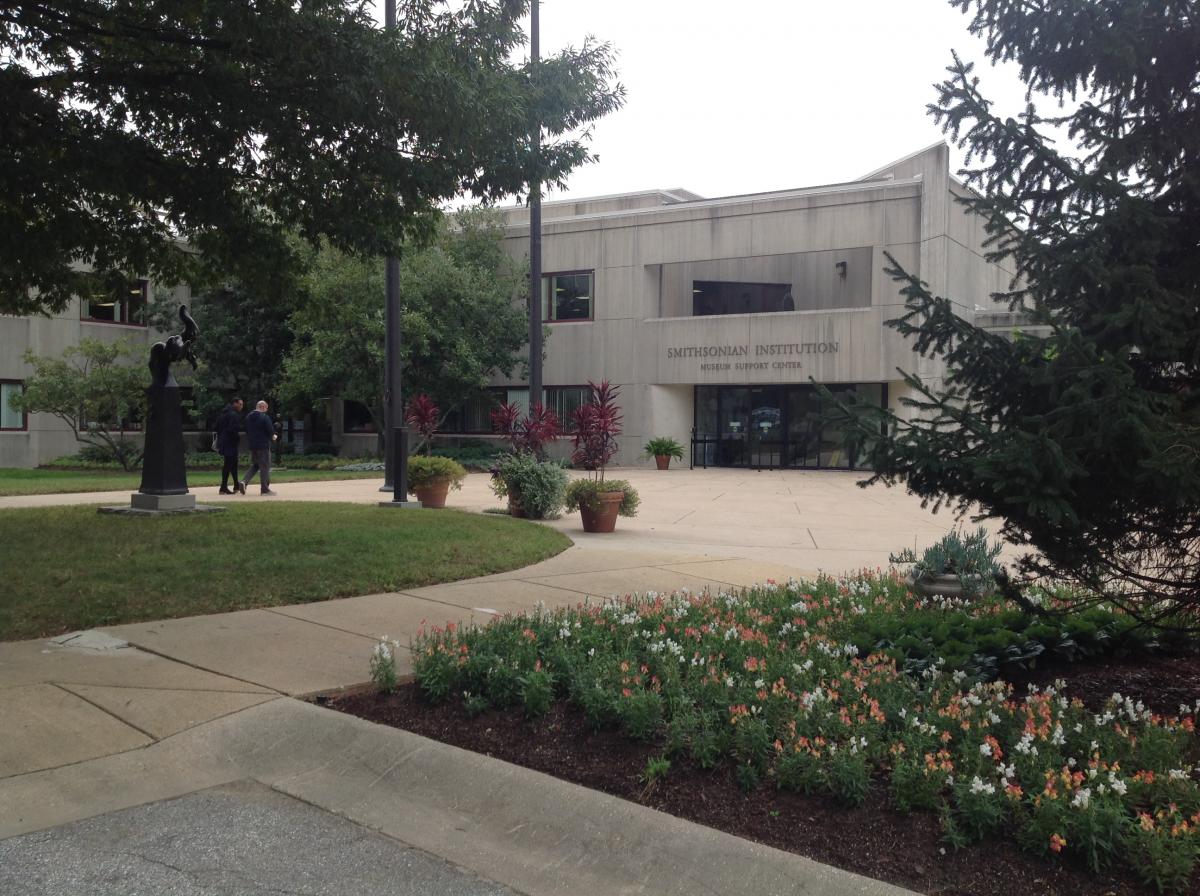 The Smithsonian’s Museum Support Center (MSC) was dedicated in May 1983 after two years of construction and a decade of planning. At that time, the building included four storage pods, offices and labs in a unique zigzag-shaped design, covering 4½ acres of land in Suitland, Maryland. The building incorporated the latest in museum technology and was designed to provide the optimum conditions for the preservation and study of the Smithsonian’s collections.

To ensure the collections are available for future generations, the environment within MSC is strictly controlled to minimize impact on collections. The climate-control system maintains the desired environmental conditions in all areas of the building year-round. Based on recent research by engineers at the Museum Conservation Institute (MCI; located at MSC) and the Smithsonian’s Office of Facilities, Engineering and Operations, in general, the target temperature and relative humidity are 70 degrees Fahrenheit (+/- 4 degrees) and 45 percent (+/- 8 percent), respectively.

A modern pest-management program, involving the inspection and treatment of incoming collection materials and the placement of insect traps throughout the building, permit staff to monitor the situation in the center and prevent the development of infestations that could be harmful to the collections. The MSC features a modern anoxic treatment chamber, colloquially known as the CO2 chamber or the “bubble,” for museum-level IPM treatment. The use of this chamber allows MSC staff to monitor collections spaces and manage pest and environmental data to prevent pest damage to collections. All inbound collections items of suspect materials (i.e., wood, fabrics, and other biodegradable materials prone to harboring pests) to the MSC are treated in this chamber before permanent storage into collections spaces to prevent infestations.

Because the MSC is home to some of the nation’s most valuable museum collections, there is a security system that employs a combination of security officers and monitoring and detection equipment. Upon entering the facility, individuals are required to pass through a security checkpoint. All gates and entrances to the facility are badge-access only. Visitor and contractor access is strictly controlled, and the building is not open to the public.

The future needs of the Smithsonian were addressed in the design with a plan for two additions. In April 2007, the first addition, Pod 5 and its related laboratories, was opened at the east end of the MSC, adding approximately 125,000 square feet to the original building. By mid-2009,

Pod 5 housed all of the National Museum of Natural History’s biological collections (25 million specimens) preserved in fluids, such as alcohol and formalin, and informally known as the “wet collections.” This fluid collection is the largest “wet collection” in the country, and features the latest technology for the safe use of flammable liquids.

In February 2010, renovations to Pod 3—which previously held the wet collections—were completed. This pod now accommodates collections from the Freer Gallery of Art and Arthur M. Sackler Gallery, National Museum of African Art and the Hirshhorn Museum and Sculpture Garden. Pod 3 also houses Natural History collections that need a special environment, including the physical anthropology collection, a state-of-the-art meteorite storage chamber and the biorepository. The meteorite chamber is a specially constructed clean room where the Department of Mineral Sciences stores the Antarctic meteorite collection in cases flooded with nitrogen gas so that specimens from space are kept free from earthly contaminants.

The biorepository was constructed in 2011 and is a central and secure facility for the storage of frozen tissue samples, DNA and related materials from a wide range of species. The biorepository has the capacity to store over 4 million 2 milliliter cryotubes containing tissue or DNA. Storage temperatures range from minus 30 degrees Celsius to minus 190 degrees Celsius in 58 mechanical freezers and 20 liquid nitrogen freezers. Plans are currently in motion to renovate the former swing space known as “Pluto” in Pod 3 to accommodate the returning USGS Paleobiology collection from Denver. This paleobiology project involves a massive collection of over 1,100 quarter units of material and will become one of the largest paleobiology collections in the country when the project reaches completion in spring 2019.

The five large pods, each approximately the size of a football field and rising to approximately 28 feet in height, are separated from an office and laboratory complex by a 20-foot-wide central corridor or “street.” Pods 1, 2 and part of 4 contain more than 15,000 storage cabinets. A portion of Pod 4, referred to as “high bay,” houses oversize specimens such as boats, totem poles, fossils and meteorites. Many fossils from the Department of Paleobiology are housed in Pod 4, including dinosaurs, turtles, horses and ancient plants. Pod 4 also has a Smithsonian-wide function, in that it holds collections items from the National Museum of American History and the National Postal Museum.

In the Department of Anthropology, collections management staff, curators, conservators and other scholars conserve and study the Smithsonian’s archeological and ethnographic collections relating to cultures from around the world. The National Anthropological Archives, which includes sound and paper recordings of early endangered and obsolete languages and the Human Studies Film Archives, are also located in the MSC, as is the MCI. MCI is the center for technical collections research and conservation for all Smithsonian museums. It combines knowledge of materials and the history of technology with modern instruments and scientific advances to preserve collections.

Researchers in the departments of botany, entomology, invertebrate zoology and vertebrate zoology study plant and animal DNA in the Laboratories for Analytical Biology. MSC also hosts the Walter Reed Biosystematics Unit (WRBU), which is designed to conduct systematics research on medically important arthropods and to maintain the U.S. mosquito collection. Furthermore, in two separate buildings known as Garber 25 and 26 and located near the MSC, at the Paul E. Garber facility, the departments of vertebrate zoology and paleobiology store modern and ancient marine-mammal skeletons. These collections are actively used by researchers and include skulls from the largest whales to smaller animals, such as seals, sea cows and dolphins.

Besides the main building of the MSC, the Suitland campus features several auxiliary research buildings, including research greenhouses for the botany department and the osteo preparation lab (OPL). OPL is used to prepare specimens for the National Museum of Natural History collections, perform necropsies and serves as long-term storage for a small amount of frozen collections. The preparation and curation procedures of vertebrate specimens relies on the commitment of the OPL staff, as well as the use of dermestid colonies, composting and other maceration techniques. The lab’s sizeable space and state-of-the-art necropsy equipment for large-animal dissections are used on a regular basis by visiting scientists studying vertebrate anatomy. In addition, the OPL is integrally involved in tissue collection from animal remains, which are held by the museum for research purposes in both collections spaces at the museum and our unique biorepository. The osteology specimens in the museum’s research collections draw scientists from around the world, and the research done on the specimens has resulted in many intriguing discoveries.

The collections at the MSC include items acquired throughout the history of the Smithsonian as well as those dating from before its founding. Specifically, there are anthropological and natural history specimens gathered by the Wilkes Expedition (1838–1842) and diplomatic gifts to American presidents. The earliest piece was a gift to President Martin Van Buren (1837–1841). Other items include material from the Perry Expedition to Japan (1854).

Size of the Collection

There are currently more than 54 million collections items at the MSC.

The collections storage space at the MSC totals over 600,000 square feet.