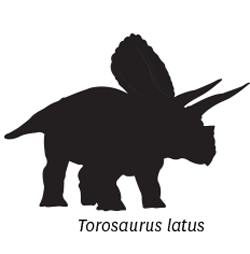 Main Message: Dinosaurs, like all life throughout the history of Earth, lived within complex ecosystems. The study of fossils helps people understand these ancient ecosystems. Examining long-gone ecosystems helps in understanding how the world is changing today and what the consequences of a mass extinction could be in the future. Reimagining and exhibiting this ancient world is an evolutionary process in itself, involving give-and-take among the exhibition team’s scientists and artists.

Background: In 2014, the current dinosaur and fossil hall will close for renovations and reinterpretation and reopen in 2019. This interim exhibition will provide museum visitors with the opportunity to see “dinosaurs” and other fossils during these next five years.

“Last American Dinosaurs” tells the story of the final days of dinosaurs as recorded in the Hell Creek Formation of North Dakota. Visitors can explore this world from 66 million years ago, before an enormous and sudden asteroid impact drastically altered the flora and fauna forever. Triceratops, Tyrannosaurus rex and many other fossils provide insight into their world and help people understand how the planet responds to drastic changes.

The exhibition and its FossiLab give a glimpse into the process of discovery and research as the museum reveals how paleontologists uncover clues into how life and environments are connected to form dynamic ecosystems that persist and change over very long periods of time. The museum also pulls back the curtain for a peek behind the exhibition-development process by including the lively dialogue between science and art that leads to beautiful and accurate reconstructions of life in the past.

Major Areas of the Exhibition

Visitors will learn that 66 million years ago, dinosaurs and other animals thrived in North America’s western interior. Plant and animal fossils from the lush, diverse Hell Creek ecosystem give people a look into this specific time and place.

Fossil evidence tells scientists how dinosaurs as different as T. rex and Edmontosaurus ate their meals and how Triceratops grew. A mural of Triceratops will give visitors a window into the behind-the-scenes collaboration between scientists and paleo-artists. Articulated specimens will include “Hatcher” the Triceratops, the skulls of an adult Edmontosaurus, an infant and yearling Triceratops and a fully articulated T. rex.

Scientists have learned much by examining new evidence about dinosaurs in the past hundred years. A comparison of two reconstructions of Tyrannosaurus and Triceratops will highlight changes in their knowledge and reveal how artists take new information into account when creating images of extinct animals.

An audiovisual program will feature a paleontologist who pulls together animated and graphic components to illustrate how energy from the sun is transformed into food and moves through an ecosystem today—and 66 million years ago.

A massive mural recreates the swampy Hell Creek environment when the dinosaurs lived. Photographs, videos and labels reveal how artist Mary Parrish collaborated with scientists to bring this ecosystem to life. Fossils include Stangerochampsa (similar to an American alligator), Didelphodon (an extinct mammal) and Habrosaurus (an ancient salamander).

Sixty-six million years ago, a massive asteroid slammed into the sea near present-day Mexico, bringing the world of the dinosaurs to an abrupt end. Visitors will learn about this mass extinction event, and how the rocks of the Hell Creek Formation preserve the evidence of what happened. On the other side of the wall, visitors will see how life rebounded, eventually leading to the world people know today.

This section will focus on the fossilization process, and how scientists look for traces of ancient life. Visitors will be able to take their chances at being preserved in the fossil record in an arcade-style game or watch videos of museum scientists out in the field. At the FossiLab, visitors will observe staff and volunteers prepare and conserve fossils for research.

Five times in the past, the diversity of life on Earth has plummeted in a major mass extinction. Many experts think a sixth one is happening now.

As they exit the exhibition, visitors will view updates on the renovation of the new dinosaur and fossil hall as well as artist renderings and design sketches for the new exhibition and meet the team behind this massive, exciting undertaking.