The Smithsonian’s National Museum of the American Indian, George Gustav Heye Center in New York opens the imagiNATIONS Activity Center Thursday, May 17, 2018. In this lively, interactive space, young visitors will explore the scientific principles behind Native ideas so ingenious they remain a part of modern life and will leave with a key takeaway—Native people were the original innovators of the Americas.

The center’s educational goal is to demonstrate the influence and impact of Native innovations and technologies on everyday life in ways that will engage visitors and stimulate their thinking—to convey Native innovations that shape the world of today. Young visitors will actively learn by solving puzzles, performing experiments and trying their skills at computer simulations. They will also handle objects made from the materials Native people used to solve everyday problems. The content is grounded in principles of science, technology, engineering and math (STEM) and is taught in a multicultural setting that relates science to Native lifeways.

Cropetition: In this farming computer simulation, players pit their skills against weather, pests and pellagra (vitamin B deficiency) to keep their families alive the way Haudenosaunee people of New York did. They must choose the best combination of crops to survive. Up to four can play, but there is a surprise: if they compete, the outcome is not as successful as if they cooperate.

Hearing Underwater: What does a kayak paddle in a tank of water teach about physics? When a visitor puts the handle to their ear, they can hear sounds that inaudible in the air. Arctic hunters knew sound travels faster and better underwater, so they used the water to detect faraway seals. Turning the paddle can even locate the source of the sound.

Do Maya Math: The Maya had an ingenious way of doing math using only three symbols to represent all numbers. Visitors can choose to learn it on a computer or by using shells, beans and sticks the way Maya merchants would have. There is a catch—the Maya used Base 20 instead of the commonly used Base 10. To succeed, participants have to use the symbol for zero, a central learning point of the exercise, because the Maya civilization was one of only three cultures on earth to invent the concept of zero.

Build an Iglu: No two blocks of snow in an iglu are the same shape, and neither are the pieces of this puzzle. To assemble it, students will use the same geometry concepts as Native people of the Arctic. The final shape is not a dome or half-circle, but a catenary arch—the perfect shape for a stable structure.

Decode the Codex: Players of this game face the same challenge modern botanists do: identifying the plants in a 16th-century Aztec medical codex, or book. They can use two kinds of evidence to match the Aztec drawings to modern plant photos: the appearance and structure (morphology) of the plant and its medical uses. Some modern drugstore products use ingredients from the same plants.

Make It, Shake It: Which bridge design stands up better in an earthquake—a stone arch or a suspension bridge? Students can perform this experiment to find out. Their model bridges will not work unless they tighten the tension on one and compress the other—engineering principles that modern bridge builders still use. Above this activity hangs a full-scale replica of an Inka suspension bridge made by the bridge-builders of Qeswachaka, Peru.

For more information about the sections of the imagiNATIONS Activity Center, members of the media may contact the museum’s Office of Public Affairs for a copy of the center’s script and object list.

Future programming will include “Make & Take” activities, the continuation of the museum’s successful “Storybook Reading” program and a rotating slate of the Native presenters and educators who will further illuminate the subject matter of the imagiNATIONS Activity Center.

The National Museum of the American Indian’s imagiNATIONS Activity Center is made possible by the United States Congress and the City of New York, with support from the Office of the Mayor, New York City Council, and the Manhattan Borough President’s Office through the Department of Cultural Affairs. Lead funding is provided by Valerie and John W. Rowe and The Rockefeller Foundation. Major funding is provided by the Booth Ferris Foundation; Margaret A. Cargill Philanthropies; Margot and John Ernst; The George Gund Foundation in memory of George Gund III; the Nathan Cummings Foundation; the National Council of the National Museum of the American Indian; and The Walt Disney Company. Additional funding provided by Catherine Morrison Golden; the New York State Council on the Arts with the support of Governor Andrew M. Cuomo and the New York State Legislature; and the Rauch Foundation. 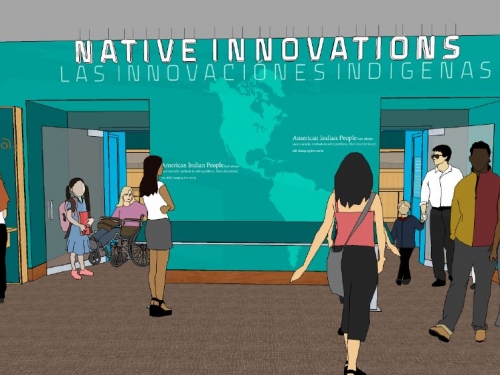