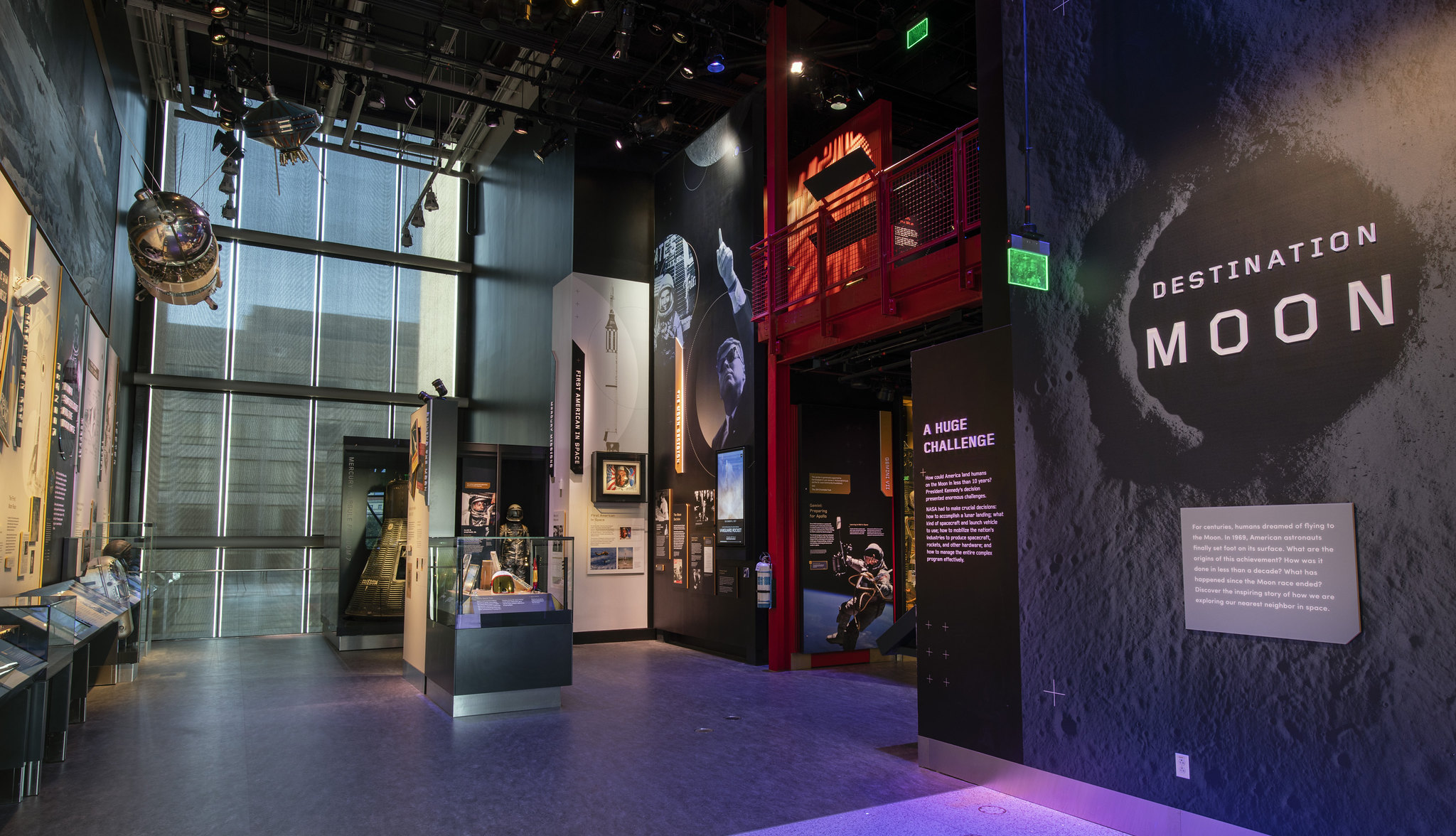 “Destination Moon” tells the story of lunar exploration from ancient dreams to the missions happening today. In other words, it is not just the moon race. The exhibition begins with early and pre-Sputnik imaginings of lunar flights and ends with a section on the return to the moon since the 1990s. Driven by the Cold War Space Race with the Soviet Union, the United States rose to meet President John F. Kennedy’s 1961 challenge “to land a man on the moon and return him safely to the Earth” before the end of the decade. The gallery recounts the Mercury, Gemini and Apollo programs and the national mobilization required to carry them out. In sidebars, it also depicts the Soviet lunar program. In addition, the exhibition shares new and untold stories of people from various racial and ethnic backgrounds and all genders lending a hand to land a person on the moon.

Michael Neufeld
Michael J. Neufeld is a senior curator in the Space History Department. He was chair of the department from 2007 to 2011. Neufeld came to the museum in 1988 as the A. Verville Fellow, and held Smithsonian and National Science Foundation fellowships in 1989–90. In 1990, Neufeld became a curator in the museum’s Aeronautics Division, where he remained until early 1999, specializing in World War II history and German World War II aircraft. After transferring to the Space History Department, he took over early missile and rocket collections and Mercury and Gemini spacecraft. He has led, or contributed to, several museum exhibits, including Air Power in World War II, Apollo to the moon and the Pioneers of Flight Gallery, as well as the McDonnell Space Hangar at the Steven F. Udvar-Hazy Center. In 2017, he received the Smithsonian Distinguished Scholar Award, the highest research honor given by the Institution. Born in Alberta, Canada, he received history degrees from the University of Calgary and the University of British Columbia before getting a doctorate in modern European history from The Johns Hopkins University in 1984.

Cathleen Lewis
Cathleen Lewis is curator of the museum’s international space programs and spacesuits, specializing in Soviet and Russian programs. Lewis completed her bachelor’s and master’s degrees in Russian and East European studies at Yale University, and she completed her dissertation for her doctorate in history, “The Red Stuff: A History of the Public and Material Culture of Early Human Spaceflight in the USSR, 1959–1968,” at George Washington University in 2008. Lewis curates Soviet and Russian components of “Space Race” exhibition at the museum. She also has interests in the history of astrobiology and the history of Black people in aviation and spaceflight. Between 1998–2007, she chaired the museum-wide Collections Committee. She was chief curator for the Dream to Fly gallery. Her current research is on the history of the public and popular culture of the Russian fascination with human spaceflight in the Soviet Union. She is also working on a comparative history of the development of American and Russian spacesuits.

Teasel Muir-Harmony
Teasel Muir-Harmony is a historian of science and technology and curator of the Apollo Spacecraft Collection. Before coming to the Smithsonian, she earned a doctorate from the Massachusetts Institute of Technology (MIT) and held positions at the Center for History of Physics at the American Institute of Physics and the Adler Planetarium and Astronomy Museum. Muir-Harmony’s current research focuses on the history of space diplomacy, examining how Project Apollo shaped and mediated the United States’ role on the global stage. She serves on the Smithsonian exhibit committees for “Destination Moon” and “One World Connected,” and she is the historical advisor for a six-part television series on Project Apollo. In addition, Muir-Harmony co-organizes the Space Policy and History Forum and teaches in Georgetown University’s Science, Technology and International Affairs program.

Allan A. Needell
Allan A. Needell, curator emeritus, earned a Bachelor of Arts in physics from Cornell University and a doctorate in the history of science from Yale University. From 1978 to 1981, he served as associate historian at the Center for History of Physics at the American Institute of Physics, where he had responsibility for a federally funded project to investigate and recommend ways of identifying and preserving documents relating to the U.S. Department of Energy’s research laboratories. Needell joined the museum in 1981 with a specialization in Apollo artifacts. From 1999 to 2002, Needell served as chairman of the Space History Division. During that period, he published Science, Cold War and the American State: Lloyd V. Berkner and the Balance of Professional Ideals (Routledge, 2000) and wrote articles on the history of physics, the origins of U.S. national laboratories and government-science relations. Needell retired in 2018 and is now a curator emeritus.

Thomas R. Watters
Thomas R. Watters is a senior scientist in the Center for Earth and Planetary Studies. He received his Bachelor of Science in earth science from West Chester University in 1977, his Master of Arts in geology from Bryn Mawr College in 1979 and his doctorate in geology from George Washington University in 1985. He joined the staff of the Center for Earth and Planetary Studies in 1984 as a research geologist and served as chair of the center from 1989 to 1998 and 2011 to 2015. Watters is the director of the Smithsonian’s Regional Planetary Image Facility housed in the center and supported by NASA. Watters has studied tectonic landforms on all the terrestrial planets, the moon and asteroids, as well as analog structures on the Earth. Through his studies of tectonic landforms, he hopes to better understand the tectonic and thermal evolution of the solid bodies in the solar system.