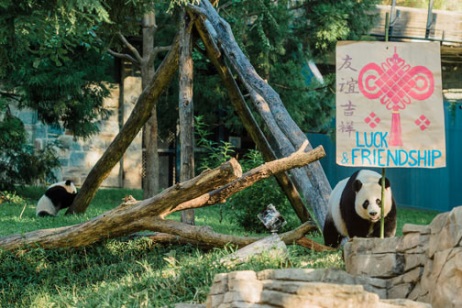 In China it is tradition to hold a Zhuazhou (dra-JO) to honor a baby’s first birthday. Zhuazhou dates as far back as the Song Dynasty (960 to 1279). During the ceremony, several objects are placed in front of the baby. The baby chooses an object without help from anyone. Each object is symbolic, and the object that the baby chooses foretells something about his or her future. For example, if a baby were to reach for a paintbrush that would mean that he or she will be endowed with great artistic skills.

The Zhuazhou for Bei Bei (BAY-BAY) will be slightly modified for a panda cub. Three posters with painted symbols will be placed in Bei Bei’s yard. Bei Bei or his mother will choose one. The symbols and the Chinese calligraphy painted on each of the posters were painted by Chinese students. (Note: the posters were made with non-toxic and animal-friendly materials approved by the Zoo’s veterinary and animal care teams.)

Cui Tiankai, ambassador of the People’s Republic of China

Bei Bei, Bao Bao and Tian Tian will receive special frozen birthday cakes at 1 p.m. during the public celebration. The cakes were made by the Zoo’s nutrition department. Bei Bei’s frozen tiered cake was made with diluted juice and water tinted with food coloring. The red-and-purple tier was made with beet juice, the orange tier was made with carrot juice, the yellow tier was made with apple juice and food dye was used for the blue and green tiers. The number “1” topping the cake was made with apple juice. The red decorative appliques were made with slices of apple, pear, carrot, cooked sweet potato and leaf-eater biscuits—some of the pandas’ favorite foods. The bamboo decorating the cake is arrow bamboo, a favorite species of the pandas. The keepers also topped the cake with some honey for an extra special treat.

At 1 p.m., the Zoo’s Department of Nutrition staff will place the cakes in the pandas’ yards. The Zoo will share the event as it occurs on social media through a Facebook Live broadcast.

Party Favors for the Public

Guests will enjoy a taste of noodles prepared by the Chinese embassy. Dan Dan (dahn-dahn) noodles are served cold and known as a dish from Sichuan Province. It is a tradition for Chinese people, young and old, to have a bowl of noodles on their birthday because they symbolize ‘long life.’ Many restaurants in China serve special noodles to patrons celebrating their birthdays. In this case, the noodle is hand-made and there is only one tremendously long noodle in the bowl symbolizing ‘endless long-life and happiness.’ The China Conservation and Research Center for the Giant Panda in Wolong is in Sichuan Province.