We Belong Here: Marking the 50th Anniversary of Title IX 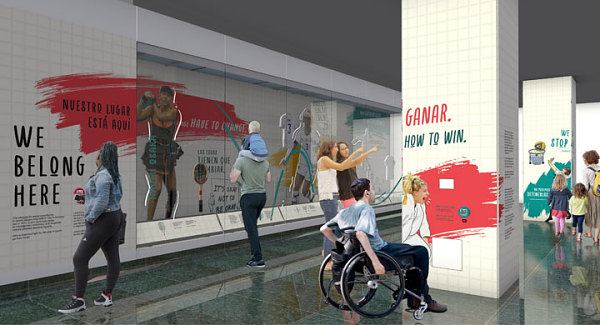 Coinciding with the 50th anniversary of the federal legislation that unintentionally helped bring equality to sports, this 30-foot display case illuminates three athletes’ stories while a large mural and access to digital content expand the narrative with additional accomplishments and struggles. We Belong Here features Naomi Osaka’s tennis racquet from the 2020 U.S. Open Tennis Championship, the U.S. National Soccer team jersey worn by Samantha Mewis when she was named U.S. Soccer Player of the Year in 2020, and a T-shirt skateboarder Leo Baker, a trans, non-binary athlete, made to express their identity in 2019. Baker made the cut for the inaugural U.S. Olympic Skateboarding team that year but declined to compete when faced with having to skate for the women’s team. This highlights case looks at the long trajectory of struggle for equal opportunity in sports that began long before the watershed legislation and athletes’ continuing journey with a law that is constantly evolving.