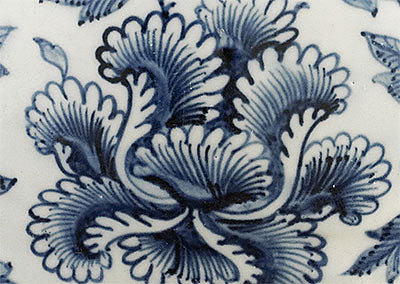 The twenty-three works in this exhibition reflect the wide variety of form and decoration in vessels for cooking, dining, storage, transport, and ritual. Vietnamese ceramics have been traded across Southeast Asia and to West Asia and Japan since the fourteenth century. The earliest high-fired stoneware made in Southeast Asia was produced at kilns in northern Vietnam, then a Chinese-controlled territory, during the second and third centuries CE. The most recent ceramic in this selection—a blue-and-white lidded jar with a design of tiger and bamboo—was made perhaps a century ago near Ho Chi Minh City (Saigon), in the far south of Vietnam, at kilns that are now a major source of glazed ceramics for the American market.