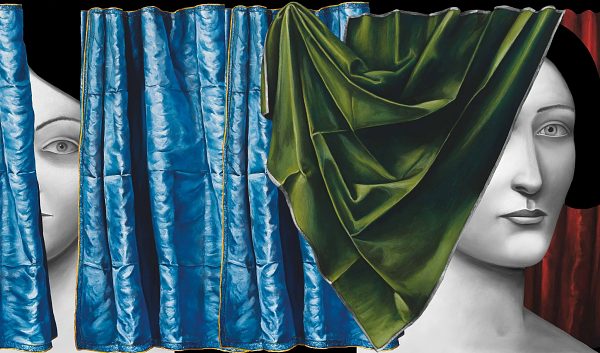 The exterior of the Hirshhorn’s iconic cylindrical building is the site of internationally renowned Swiss artist Nicolas Party’s newest artwork. Draw the Curtain (2021) wraps 360 degrees around the temporary scaffolding that encases the Museum building and spans a circumference of 829 feet, becoming the artist’s largest work to date. An original pastel painting digitally collaged and printed onto scrim, the site-specific commission transforms the Hirshhorn’s façade into a monumental canvas that stands out against the landscape of predominantly neo-classical buildings on the National Mall. The work is on view while the building’s envelope undergoes critical repairs.

Draw the Curtain comprises several anonymous faces partially hidden by draped curtains, gazing directly at the viewer no matter where they are viewing from around the building. Known for his unique visual language that simultaneously celebrates and challenges conventions of representational painting, Party steeps this work in art historical technique and symbolism. The featured portraits, painted in black and white, are based on classical sculpture, while the curtains, painted in shades of green, blue, yellow and red, are sampled mostly from 17th-century Dutch paintings. Painted in the tradition of “trompe l’oeil,” the work addresses themes of dupery and illusion and conjures a scenographic set. It invites passersby to peek backstage behind the “curtain” on the National Mall and examine both the collections housed within the Smithsonian and the contents of the distinctive government buildings dotting the surrounding landscape. Draw the Curtain reminds the viewer of the opacity of these spaces, while inviting them to consider what lies behind the façades of the buildings in the nation’s capital.

Deinstallation of Nicolas Party’s Draw the Curtain will begin Oct. 17.