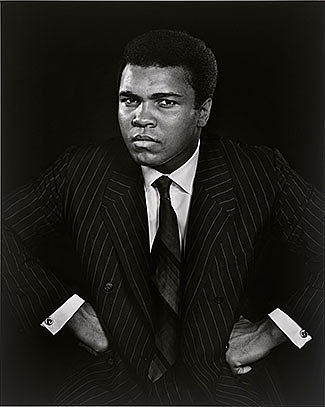 The Smithsonian’s National Portrait Gallery recognizes the life and accomplishments of “The Greatest”—Muhammad Ali—with a photograph by Yousuf Karsh. The image, taken in 1970, is installed in the museum’s In Memoriam space. The Portrait Gallery has 14 images of the boxer, including a 1981 painting on the third-floor mezzanine, titled “Cat’s Cradle,” by Henry C. Casselli Jr. Media.

From his gold medal at the 1960 Olympics through his epic fights with George Foreman and Joe Frazier to his late life battle with Parkinson’s disease, Ali never left the public eye in a tumultuous, controversial and electrifying life as a boxer and spokesman of conscience. Quick-witted and outspoken, he started boxing when he was 12, and his talent was immediately obvious. He burst on to the national sports scene in the 1960s, creating a new model for the African American athlete. His conversion to the Muslim faith and opposition to the Vietnam War made him a lightning rod for criticism, exposing the cultural fault lines of that decade. Stripped of the heavyweight title in 1967, Ali was vindicated in the courts and regained his title in 1974. Post-boxing, he became a citizen of the world, involving himself in global social and humanitarian causes that showed a commitment and compassion that made him a uniquely historic figure.