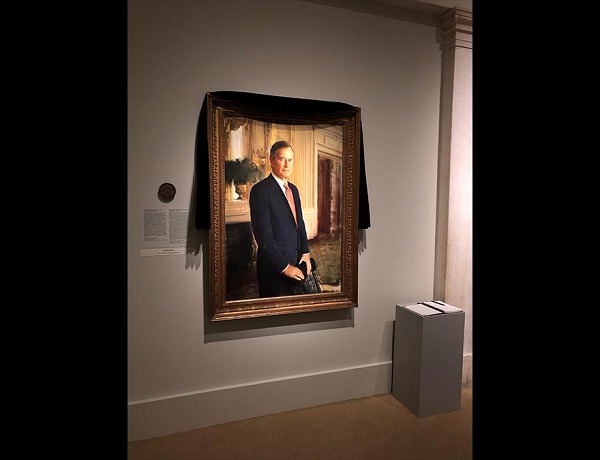 In memory of George Herbert Walker Bush, the National Portrait Gallery has added a drape to his portrait in the America's Presidents gallery. Visitors may pay their respects and record their thoughts in a journal next to the portrait.

George Herbert Walker Bush ( June 12, 1924 – November 30, 2018 ) A decorated naval aviator in World War II, George H. W. Bush went on to a successful career in the oil industry of West Texas. Subsequently, high-level governmental positions, including the directorship of the Central Intelligence Agency and the vice presidency, gave him one of the most distinguished résumés. He was the natural Republican nominee after Reagan and easily won the 1988 election over Massachusetts governor Michael Dukakis.

In addition to successfully managing the complicated policy transitions prompted by the collapse of the Soviet Union and the end of the Cold War, he marshalled a U.S.-backed military coalition to eject Iraq’s army from Kuwait after the invasion of 1990. The First Gulf War, as it is now known, was a dramatic and comprehensive triumph, one that signaled the recovery of the American military following the war in Vietnam. Even with Bush’s victory in the Persian Gulf, however, domestic politics—especially his breaking of a pledge not to raise taxes—lowered his popularity, and Bill Clinton easily defeated him in 1992.