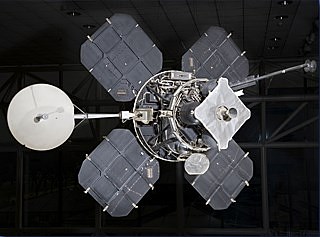 This gallery displays a constellation of vehicles used for lunar exploration. Dominating the space is a real lunar module, the second one built for the Apollo program. The orbital test flight of the first lunar module proved so successful that a second test flight was deemed unnecessary. The lunar module displayed here was used instead for ground testing. Six more like it landed astronauts on the Moon.

A series of unmanned lunar spacecraft preceded the manned missions. These robotic explorers transmitted images of the Moon, inspected its surface, and searched for Apollo landing sites. Examples of the three types of space probes involved in that effort—Ranger, Surveyor, and Lunar Orbiter—hang above the lunar module, along with a more recent lunar explorer: the Moon-mapping spacecraft Clementine.